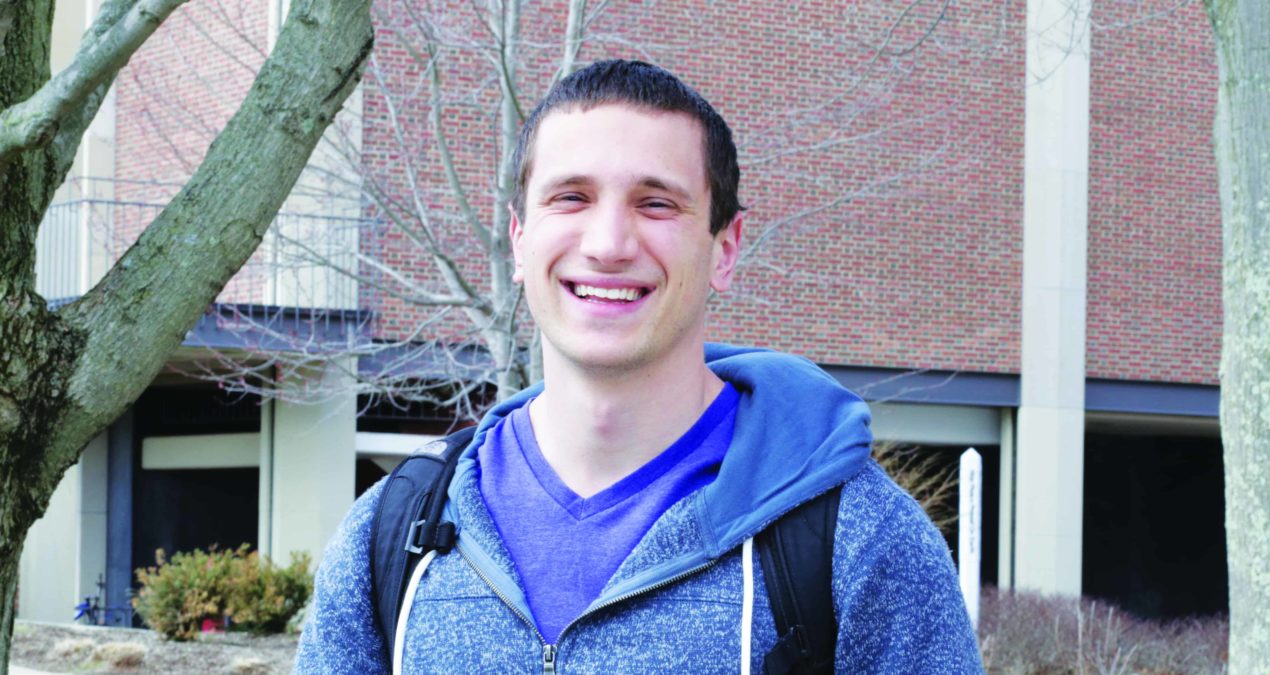 Freshly tanned from a brief Spring Break trip to Florida to see his aging grandfather, Jared Kriwinsky ‘16, jokingly asked, “What am I not involved with?”

Indeed, the junior from Orange, Ohio — a small, wealthy town just outside of Cleveland — takes the meaning of an overly-involved Denison student to an entirely new level.

Kriwinsky is currently a SHARE advocate, a class senator for the Class of 2016, brother of Delta Chi fraternity, president of the Interfraternity Council (IFC), member of the rugby team, member of the Security Council and member of both Phi Alpha Theta, the history honorary society, and Omicron Delta Kappa, the university’s newest leadership honor society.

Recently, as the president of the campus’ IFC, Kriwinsky has launched the “It’s On Us Campaign” with the help of the IFC board and Aimee Maczko, the associate director of the Campus Leadership and Involvement Center (CLIC).

According to its website, the goal of the “It’s On Us Campaign” is simple: to end sexual assault. Kriwinsky said, “It sucks that we have to do campaigns like this to end it because it shouldn’t be an issue to begin with, but we recognize that it’s an issue and want to do whatever we can to stop it.”

Kriwinsky recognized that members of varying fraternities nationwide are more likely to commit sexual assault than unaffiliated men, but he wants this stigma to be untrue on Denison’s campus.

“IFC realizes how important it is to end sexual assault,” he said. “Everyone should feel safe at a fraternity party.”

In order to kick-off the “It’s On Us Campaign,” members of both IFC and SHARE tabled in Slayter the week before spring break to ask students to sign the pledge to end sexual assault.

Tablers also handed out pins bearing the name of the campaign for students to wear on their bags and other personal items.

Recognizing that “words only mean so much,” Kriwinsky also required all new members of all fraternities in IFC to get trained in Bystander Intervention with SHARE, a type of training that teaches warning signs of potentially dangerous situations and tips for how to best respond to that situation for the bystander and anyone who could potentially be in a dangerous situation.

Because April is Sexual Assault Awareness month, Kriwinsky hopes to bring the “Walk a Mile in Her Shoes” campaign to campus.
This campaign is an “international men’s march to stop rape, sexual assault and gender violence,” according to its website.

He is working with SHARE, the CWGA and Laurel Kennedy, vice president of student development, to bring this campaign to Denison’s campus.

Combating sexual assault is only one of two of the main goals for Kriwinsky’s term as IFC president — he also plans to focus on creating a more inclusive campus environment.

He said that last semester, the IFC executive board focused on building bonds between the fraternities. Now that IFC members are more comfortable with members from different fraternities, Kriwinsky feels that the organization can focus on his second goal.

In taking steps to implement this agenda, Kriwinsky has met with members of the National Pan-Hellenic Council (NPHC) about tightening bonds between all four councils of Greek life on campus. He also hopes to attend meetings of the Black Student Union,

La Fuerza Latina and several organizations in attempt to “turn a new leaf with IFC.”

But Kriwinsky recognizes the challenges of achieving these goals. He said, “Unfortunately, on both sides, there are people who are set in their ways and aren’t comfortable moving away from them.” However, the best way to combat this, he said, is to be open to talking about race relations. He said, “We’re all Denisonians; we’re all here for a reason.”

If any member of the Denison community is interested in taking the “It’s On Us” pledge, then please visit the campaign’s website or talk to any member of IFC, including Kriwinsky.