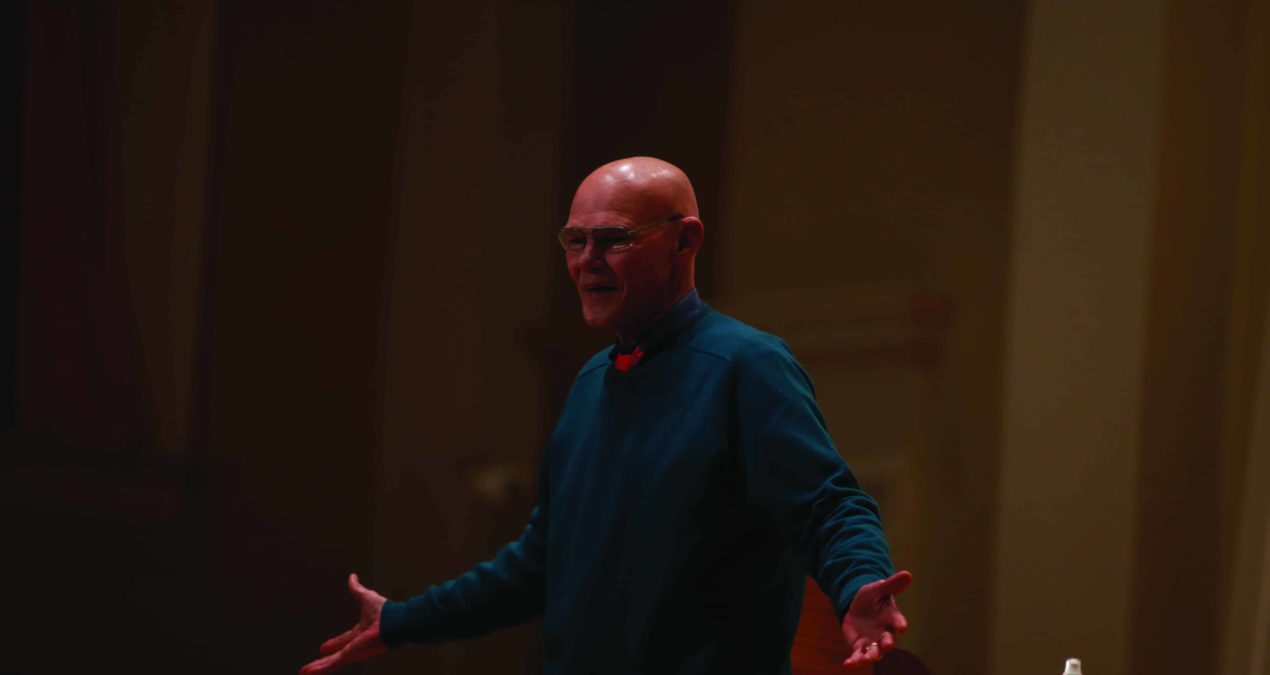 In James Carville’s address to Granvillians, faculty, staff and the Denison student body, Carville challenged students to be their best selves, regardless of the challenges that they may face.

He said, “You don’t have to run a presidential campaign; you don’t have to be on tv. There are things that you care about, and you should follow those. Don’t worry, you’re going to lose. You’re going to fall down… It doesn’t matter. Stay in there, keep your talents, be active, care, seize initiative. That’s the way I want you to lead your lives.”

Carville was brought to Denison as a keynote speaker on behalf of the Denison Democrats, who brings a political speaker to campus each year.

Carville is most famous for working as Bill Clinton’s lead strategist against the incumbent at the time, George H.W. Bush.

Some of Carville’s other accomplishments include authoring several books, writing for The Hill, working as a political consultant, acting in several movies, teaching in the political science department of Tulane University and working as both a contributor and commentator for Fox News.

Amanda Eastman ‘16 — a political science major from Granville, OH and president of the Denison Democrats — said that their goal when bringing Carville to campus was to find someone who would attract a diverse group of students and could offer some political nuances to his or her address.

Eastman said that Carville clearly accomplished both of these goals. In what seemed to be one of the largest student gatherings of the year, Carville “made the speech relatable,” Eastman said. She continued, “he stressed that political leanings weren’t as important as understanding the [political] process.”

For example, during his address to the student body, Carville stressed the importance of understanding what is happening in the political world by asking the students to imagine that they are on dates.

He joked, “let’s say you’re on a date. You’re having a good time, and you’re feeling good. You say, so do you think we should negotiate a deal with Iran? Do you think the Supreme Court should overturn Obamacare or not? If that person says they don’t follow that stuff, then you really don’t want to be around that person.”

But even though his speech was primarily centered around the importance of getting involved with the political process, Carville also commented on the 2016 presidential race.

Although many people would assume that Carville plans to assist in Hillary Clinton’s highly predicted bid for the presidency in 2016, this is not the case. Carville said in a private interview that he will not get involved because he’s retired.

He added that the Republican primaries will be more interesting than the Democratic primaries this year because “Democrats usually already know who they want, and Republicans are waiting to fall in love [with a candidate].”

Carville’s mixture of talking about politics and the importance of political awareness met mixed reviews. Jackson Wu-Pong, a PPE major from Richmond, Va., said “he was super funny, [but he] needed more content, and I couldn’t fully understand his accent.”

However, Steven Hix ‘16, a political science major from Dayton, OH, said “as someone who’s interested in going into Democratic politics, it was useful and helpful to see the perspective of one of the most seasoned veterans in the field.”