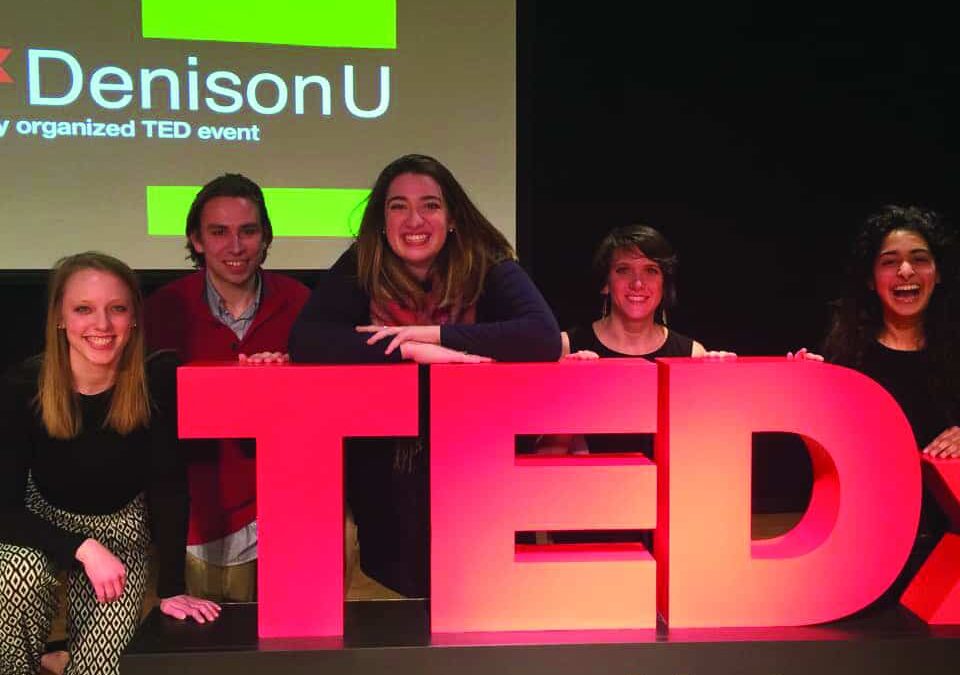 “Self-care is not an indulgement, it’s a necessity,” Megan McCormick ‘15, the first speaker at this year’s TedXDenisonU, declared. There was not an empty seat in The Nest when McCormick walked onto the stage with a big smile to deliver a powerful first talk of the night.

The theme of this year’s event was “Creative Destruction.” Event organizer Gracie Bachman ‘17, who gave a talk last year, described Creative Destruction as “people searching for creative ideas and innovations to break through social and political barriers.”

“A Self-Care Revolution” was the title of McCormick’s talk. She shared her own story at Denison, and how she began practicing self-care. She spoke of her battle with depression during the first semester of her junior year, and reflected on mornings where she struggled to get out of bed.

Her vulnerability was moving, and she noted later that one of her favorite Ted Talks was given by Brene Brown, titled “The Power of Vulnerability.”

McCormick shared three self-care practices she began implementing in her own life. The first step was eliminating the shame and guilt she felt for suffering from depression. By being vulnerable about her situation, she was able to receive support from friends and counseling services. “I owe my healing to so many people,’’ she noted after the talk. Her second self-care practice was implementing self-care rituals. For her, that meant spending more time enjoying leisure and being in a community. Lastly, she emphasized choosing optimism. McCormick said that “optimism is my way of understanding the world.’’

The following two talks were given by an Ohio State student and faculty member. Emir Aden Dini, a senior Political Science major and independent researcher at OSU, spoke about the economic, scientific and social impact technology will have on humanity in the next fifty years.

The third talk was delivered by Joan M. Herbers, PhD, who is a Professor of Evolution, Ecology and Organismal Biology and of Women’s Gender and Sexuality studies at the Ohio State University. Her talk, “Challenging the Ideal Worker,” discussed the impacts of gender stereotypes in the workplace, and the challenging circumstances that many women who return from maternity breaks face.

Dr. Herbers was followed by Megan Hancock, who currently serves as the director of outreach and communications at the Denison Museum.

Hancock discussed the power of art in healing, and the ways in which art can break down harmful socio-cultural stereotypes. More specifically, she described the artwork of Kara Walker and her determination to share the stories of African Americans in the Civil War. The Denison Museum is currently running an excellent exhibition of Walker’s work.

Jordan Berger ‘15 and Jasmine Passa ‘15 collaborated on a talk titled “Storytelling for Global Empathy.” Berger studied abroad in Rwanda in the fall of 2014, during their continuing post-genocide reconstruction period. Passa studied Peace and Conflict in the Balkans during the fall of 2014, and traveled to Jordan immediately after. Both women shared heartfelt stories, taking the audience with them to the struggles of people thousands of miles away. They told the audience that one does not have to be in a different country to become empathetic towards global issues.

During the conclusion of their speech, they challenged the audience to begin serving impoverished local communities.

Studio Art Major Adam Rice ‘15 gave the final talk of the evening. “Adam’s talk was phenomenal,’’ Berger noted the day after. The audience’s response after Rice walked off the stage echoed Berger’s statement. Rice’s speech was emotional and comedic. He shared his story of growing up with dyslexia, and his lifelong relationship with art. Growing up in Kalamazoo, Mich., Rice recalled watching his father, an art professor at the

University of Kalamazoo, paint in studios. “Art was always a part of my life. More because at a young age, everything else was harder. A lot of art was getting closer to my dad,’’ he said.

His step-uncle Mike was the reason he gave the talk. It was not until Mike and his aunt Sue shared their story of traveling around the world in a small boat that Rice began fully believing that art could positively impact the world. While art had always been a part of his life, it was not until his sophomore year that he “truly believed in it.”

Rice noted that he could not have delivered his talk without an incredible support team, beginning with his girlfriend Isabel Randolph ‘16. “I couldn’t have done it without Isabel. She looked over every draft.’’ This statement was echoed by many of the speakers, who gratefully spoke of those who were there to help them during a five month preparation process. Many of Rice’s brothers in Beta Theta Pi were in the crowd. When Rice saw them after giving his concluding talk, he was taken aback. “God that was so cool,” he said. “I didn’t post anything on Facebook. They were just there. I couldn’t believe it. It was so awesome. I keep thinking of ways to say thank you. They just showed up. It was so cool.’’

Students shocked by the unexpected cost of COVID-19 diagnostic tests