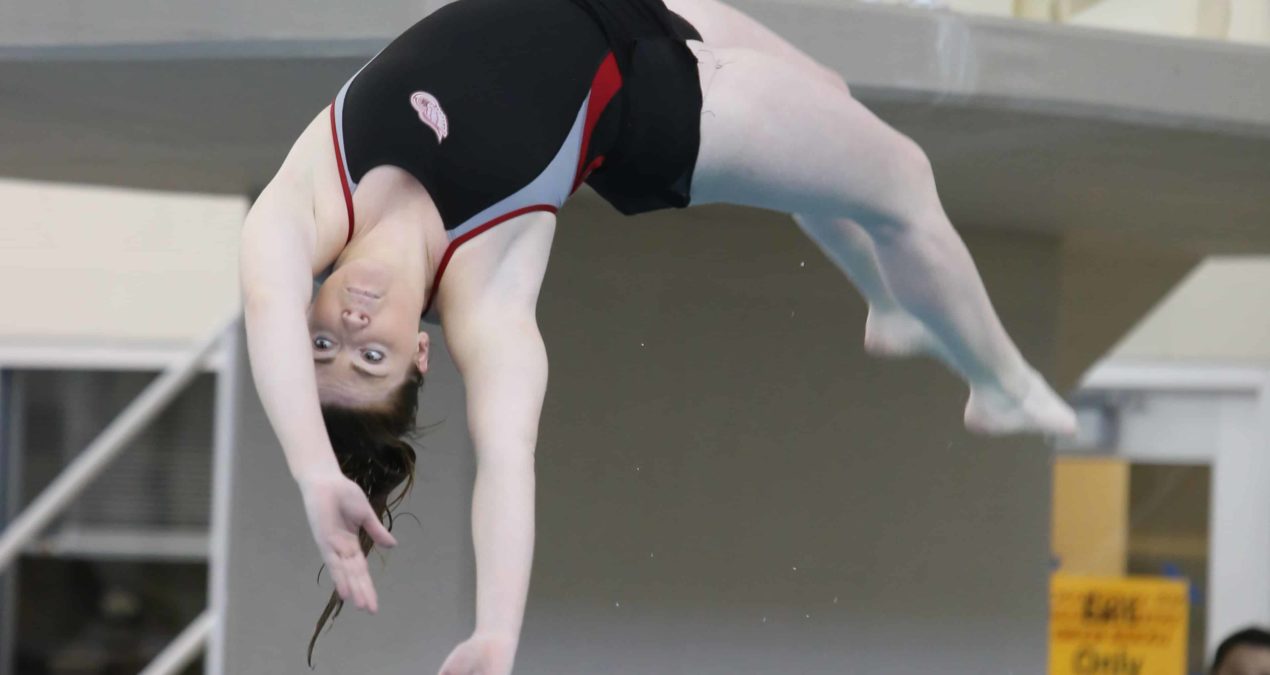 Divers light up at regionals

Connor Dignan wrings his hands on his cloth before flinging it the ground, nearly ten feet below where he stands. He approaches the diving board, preparing for his second dive of an 11-dive series. This dive has a 3.1 degree of difficulty and consists of a forward three and a half somersault pike. With one quick breath, he launches himself off of the board and executes an aerial masterpiece, adding 83.70 points to his overall score.

Dignan ‘15, along with teammates Max Levy ‘17, Ben Lewis ‘16, Brian Allen ‘17, Nathan Lightman ‘16 and Connor Dorff ‘15, travelled to the University of Chicago this past weekend to compete at the NCAA Division III Region 1 Diving Championships in Chicago. Sarah Lopez ‘17 represented the women’s team at the meet.

“I’m happy with my performances, I got the job done and punched my ticket to Texas,” Dignan said. “However, I know I can perform better and plan to do so at Nationals.” Sarah Lopez ‘17 spins through the air on the way to a personal best score at the regional championships in Chicago.

On the women’s side, Lopez went home with a new personal best on the 1-meter board. The sophomore posted an 11-dive score of 421.00, aided by a 58.80-point fifth dive, and three other dives that earned her 40 points or more.

“My goal for this season was to make it to regionals and compete on both boards,” Lopez said. “I did just that, so I was thrilled to have the opportunity to show off all the hard work I put in for the past five months.”

She also represented the Big Red on the 3-meter board, where she earned a total of 395.20 points for 11 dives.

Lopez overcame adversity at the meet. “I found out that I had bronchitis the night before we left, but I managed to push through it and do some fantastic dives,” she said. “I focused on one dive at a time and made sure to give it my all.”

Fellow NCAC competitor Maria Zarka of Kenyon was the Regional champion on both boards.

Dignan, Levy, Lewis, Allen and Lightman will vye for key diving points at the NCAA Division III Swim/Dive Nationals, which will take place in Shenandoah, Texas on March 18-March 21.