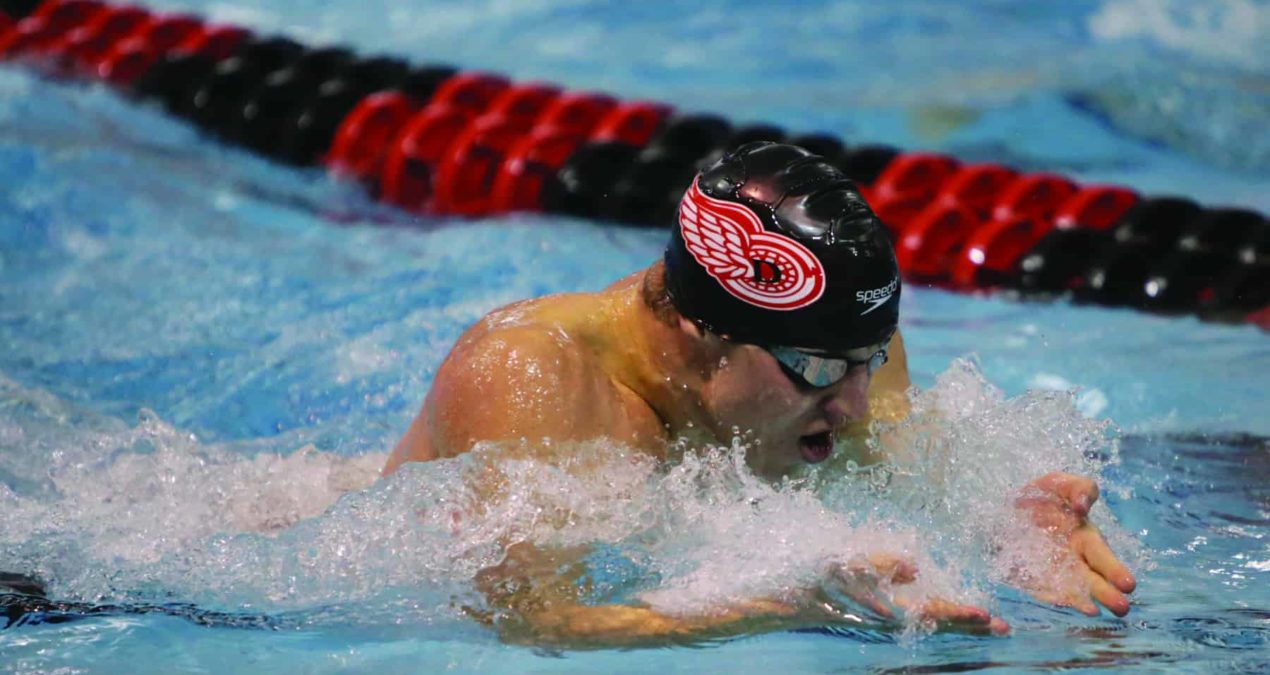 While many Denisonians basked in the warm sun over spring break, members of the Big Red swim/dive team traveled to Shenandoah, Texas for the NCAA Division III National Championships, held on March 18-21.

The Denison/Kenyon rivalry took an interesting turn on March 16 after a Denison University Facebook post advertised a challenge that Kenyon president Sean Decatur made to president Adam Weinberg: Weinberg would wear purple if Kenyon won the meet, while Decatur would have to wear red if DU defeated Kenyon.

With a pair of dual runner-up finishes for Denison, both presidents were forced to don the other school’s colors.

“We were hoping for everyone to make it to finals but just Ben, Connor and I made it,” Levy said. “We just did what we worked for, we dove, hit all our dives and ended up 1-2-3, which was a big boost for everybody at the end of the meet. It was just so exciting. It’s something that I can’t really describe.”

Arguably the most exciting performance of the meet did not come from a Denison competitor. Emory junior Andrew Wilson shattered both national records in the 100 and 200 breaststrokes, trimming two seconds off of the former 100 record, and five from the 200 record. Both of those swims placed him in the top 15 all-time in USA Swimming history.

Rosenburg competed against Wilson in the 100m breaststroke final, where he placed third.

“I’d never seen anybody go that fast in breaststroke before, in person,” Rosenburg said. “It was incredible to be racing against him because you’ve never really been in a position where you thought ‘Okay, I’m doing really well’ and then you see this guy body lengths in front of you, and you’re like ‘Well, he’s doing really well too.’”

The men ended the meet with 29 All-American performances and 16 top-8 finishes.

Michelle Howell ‘15 had a banner weekend for the Big Red at her final national championships. She won two individual races (200 IM, 400 IM). Her 400 IM finish marked the first time that a Denison female won the race at nationals, while her 200 IM finish was DU’s first win in the event since 1988.

Howell described the feeling of capturing two national titles as, “ Pure joy. I know this sounds cliché, but I have never been happier in my life. I was overwhelmed with complete and utter happiness after the first national title, and after the second I just thought to myself, holy crap. I did it. I really did it.”

Carolyn Kane ‘17 finished in second in the 50 freestyle. She was also runner-up in the 100 free.

In addition to improving upon last year’s fourth place showing, this finish was their highest in four years. They also added 34 All-America performances to their arsenal and another win over Kenyon (4th place).

Johns said that the team’s improved attitude helped them. “We went into it this year with a better mindset in that we thought,

‘We’re going to swim for our team’ rather than worrying about other people,” Johns said. “The team was pretty upset last year, and we rallied around that, and said, ‘We’re going to go out there and do our best,’ and we did.”

The appeal of sports: Teamwork and community