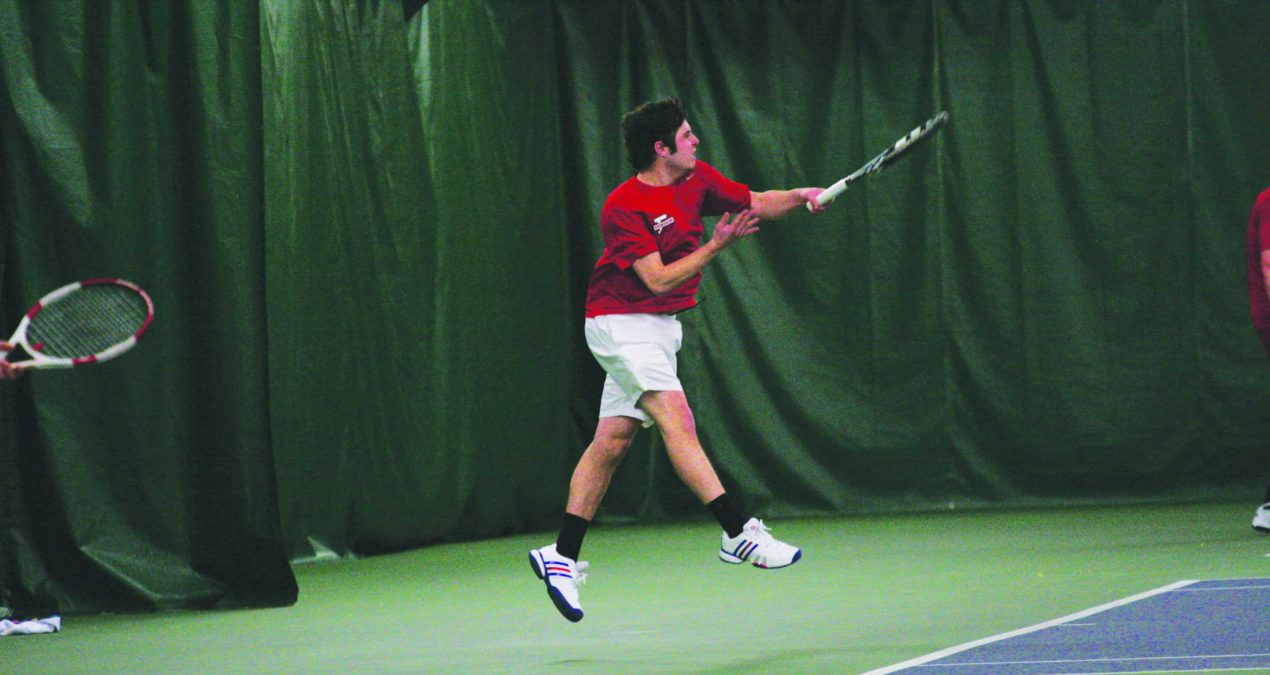 The Denison men’s tennis team rose to the occasion this Saturday in Kalamazoo, Mich.

After trailing by a point following doubles play, the Big Red battled back and managed to defeat the Hornets of Kalamazoo College, 6-3 at the Markin Center. It was certainly an afternoon filled with ups and downs, but ultimately the men’s singles players were what made the difference.

Denison claimed its first lead of the day when Grant Veltman ’15 edged out Branden Metzler in extraordinary fashion. After dropping the first set 6-3, Veltman responded by taking the second set 6-3. Trailing late in the third, with the threat of defeat looming, Veltman managed to orchestrate a late rally resulting in a 7-5 victory in the tiebreaking set.

Veltman’s experience gave him an edge in the late set effort. “The match was a breakthrough for me,” Veltman said. “In the third set, I focused on not losing my composure, playing within the capacity of my game and not giving up any easy points. I’ve learned over the course of my four years here that keeping your composure can keep you in any match.”

Owen Smith ’17 was another single’s standout on the day. He managed to clinch the match with his 6-3, 6-1 victory over Elan Dantus. Smith displayed poise and confidence down the stretch,which was a very encouraging sign for the team.

Jeffrey LoDuca ’15 closed out the match by collecting DU’s fourth-straight singles win by a score of 6-3, 6-4 over Spencer Navarre.

LoDuca was thrilled to see the Big Red singles players establishing their dominance on court.

“We’ve all worked hard both on and off the court this season and we are starting to see the results,” LoDuca said. “Having confidence in our singles play is key to the overall success of the team moving forward this season.”

With the win, the Big Red squad improves to 2-4 on the year. The team is looking forward to their spring break trip to Claremont, Calif, because the experience can prepare them for conference play.

“Were going to California to play some high level competition from around the country, the trip is really about competing against some great teams so we are prepared for the NCAC matches to start” Jackson O’Gorman Bean ’16 said.

“The trip is great because its the first time the whole team gets to do more than just practice in Mitchell,” he said. “We’re living and doing everything together, so it’s a good time to get to know people better without the stress of school work.”

The Big Red will return to action on March 16 to take on Tufts University in the Golden State.

Women’s lacrosse dominates in another home win against Rhodes

The positives and negatives of Mitchell Center smoothies