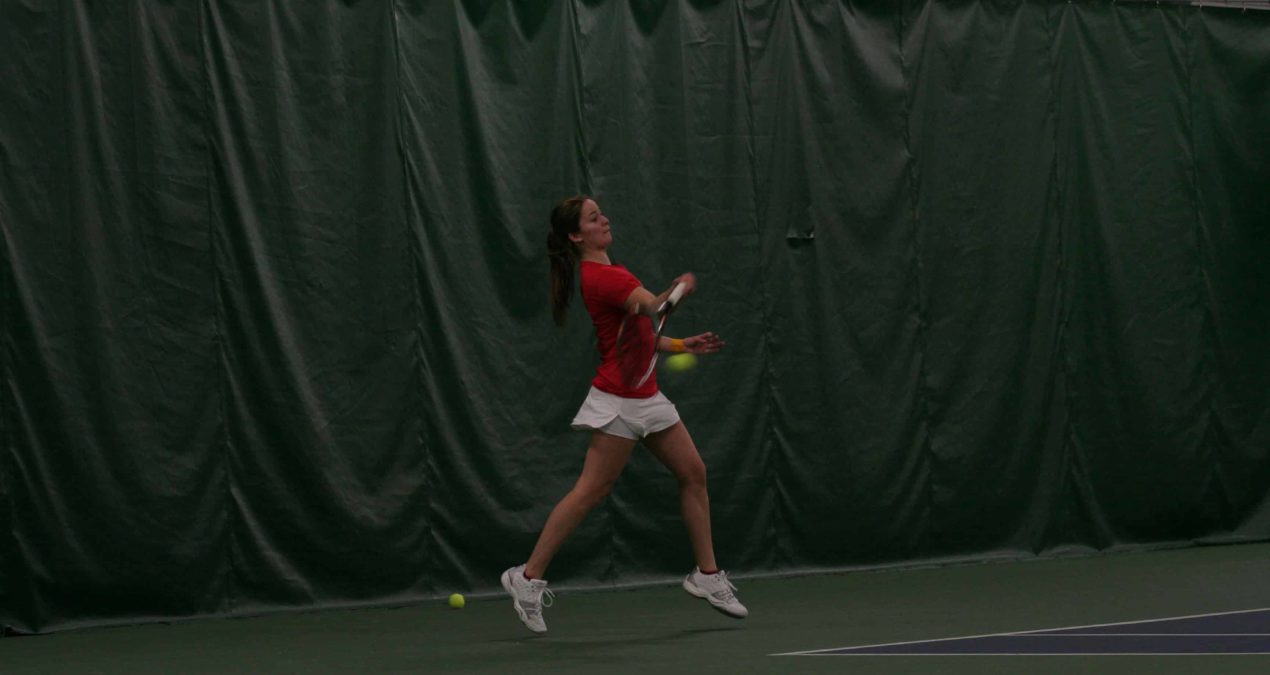 Tennis is a mental game just as much as it is a physical one, and Denison’s Rochell Issa ‘17 would agree. Issa’s 6-0, 7-5 singles finish clinched the match in the Big Red’s dominating 7-2 win over Kalamazoo College on Saturday, but it took her mental strength to do so.

Up 5-2 in the second set, Kalamazoo’s Olivia Bouchard was able to close the gap and tie the game score 5-5. Issa fought back with composure.

“I think I did a good job of regrouping and staying focused throughout the last two games,” she said. Despite her college tennis inexperience, the freshman proved her ability to keep up with the senior veteran with admirable poise.

The Big Red did not settle for anything but solid playing in their doubles run. A quick 8-1 win from third-seed doubles team Emily Holloway ‘17 and Heather Abzug ‘15, as well as a strong 8-3 finish from Meg Chiumento ‘16 and Rochell Issa ‘18 at second-seed, put the Big Red on the board at 2-0.

While first-seed team Taylor Hawkins ‘17 and Courtney Brown ‘18 put up a strong fight, the Hornets pulled away with a 9-7 win.

Issa credits the Big Red’s control to the team’s dynamic on and off the court.

“We connect on such a deep level that makes it easy to motivate each other to fight for every point.”

Denison’s momentum from the doubles matches led to a near-sweep in the singles matches. Seeds two through six were able to claim their individual wins, four of which were completed in just two sets. Holloway took charge with a masterful 6-1, 6-0 win over Kalamazoo’s Cheryl Zhang.

Along with the Big Red’s team chemistry, other team members mentioned that their tough practicing prior to the match put them well ahead of their competitors. Although Denison faced a more than one-month drought from matches prior to their visit to Kalamazoo, they utilized that time to simulate match-like situations.

“We have implemented rigorous match play into our practices that allowed us to come out ready to compete at Saturday’s match,” Holloway said. These “challenge matches” bring competitiveness and pressure to practice that makes Denison the physically and mentally fit that they strive to be.

Looking ahead, the Big Red will travel to Claremont, Calif. next week. There they will play four highly ranked teams, including Trinity (Conn.) and Tufts, who boast top-20 national rankings. That said, the Big Red will need to pack their swim suits, as well as the  dynamicity and mental toughness that they brought to Kalamazoo.