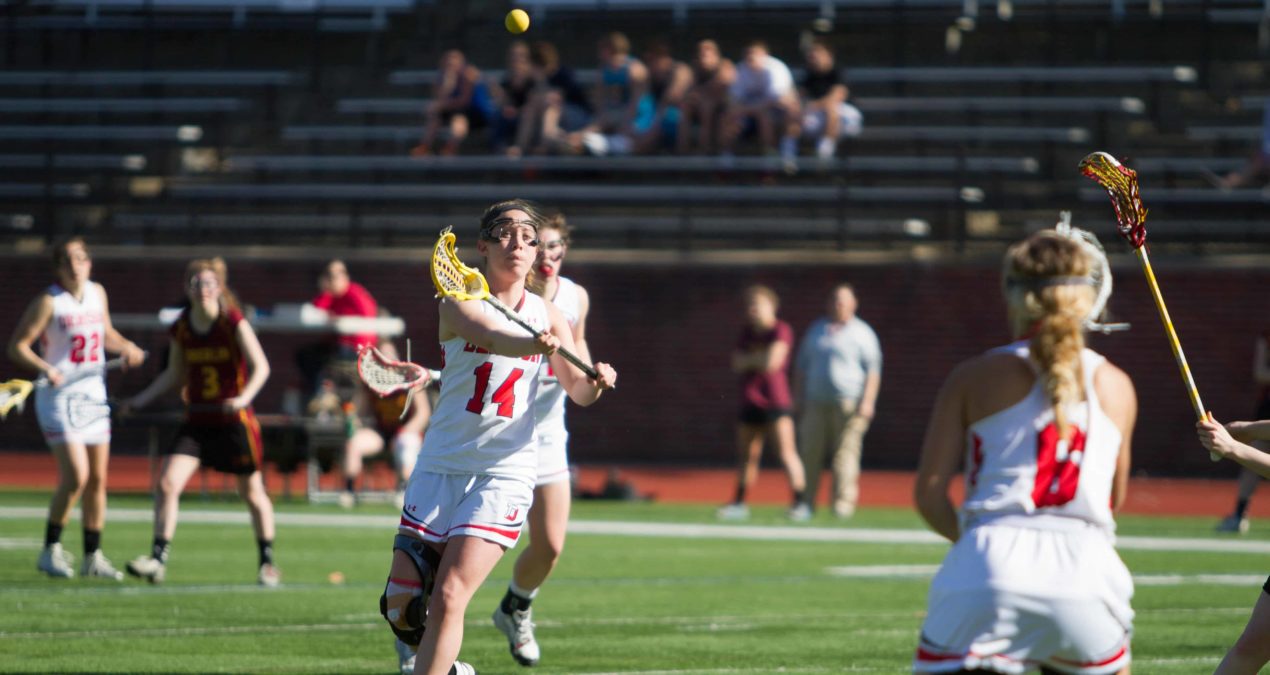 Erin Keller ‘15 cradled the ball as she contemplated the positions of the Centre defenders.  After a moment, she found the gap she was looking for, flew past multiple defenders and launched the ball past the goalie into the top of the net.

The goal was the first of the season for the Big Red, and one of many that the DU offense would power past the Colonel’s defense on Feb. 27.

Seconds after the opening whistle, Centre struck first blood, but the Big Red rampaged back and scored 12 consecutive goals in the first half.

Nine players contributed to the 21-2 rout over the Colonels, including Carol Allen ‘15, who notched five; Claire Ludlow ‘17, Reid Hirschey ‘17 and Keller, who each scored three.

Allen was proud of the Big Red attack’s evenly balanced play over the weekend. “As an offense we are extremely well rounded,” the attacker said. “We had a huge amount of scorers this weekend, which demonstrates that we are a team offense. We do not have just one player that you need to shut down, but rather every single player is a threat.”

DU was not only able to dominate in the shots category (they attempted 37 to Centre’s 15), the team also managed to shut down the Colonel offense. Laura Van Horn ‘16 saved four shots in goal for the Big Red and the defense forced 20 Centre turnovers.

Van Horn credited the team’s chemistry for their success on the defensive end.

“One huge aspect to our team’s efficient defense was our communication” the goalie said. “Without strong communication our defense breaks down easily due to the fact that no one is would be on the same page in term of what defense we would be running; it also is a big factor in the terms of knowing when to slide to ball to help pick up an attacker or when to crash to the ball to prevent the attack from getting a good shot on goal.”

DU carried the momentum they had gained against Centre into the next day’s game against Millsaps.

Once again, the Big Red attack outperformed their opponents early and launched 11 past the Majors’ goalie in the first 30 minutes.

Thanks to aggressive defense and four saves from Van Horn, DU maintained their lead in the second half of play and stormed past Millsaps, 18-6.

The Big Red head into a two week break before they play another match, and they will look to continue their high level of play throughout the season.

Allen is confident that DU will be able to stay in form during the break. “We had a great weekend after a long preseason, so I do not think that these two weeks will be too hard on our momentum” she said. “We will be getting outside more often and working on what fell short this past weekend.  Having a few weeks to continue to work and get better will be nothing but beneficial to our team.”

The Big Red return to action on March 15, when they will travel to Clearwater, Fla. to battle Connecticut College.