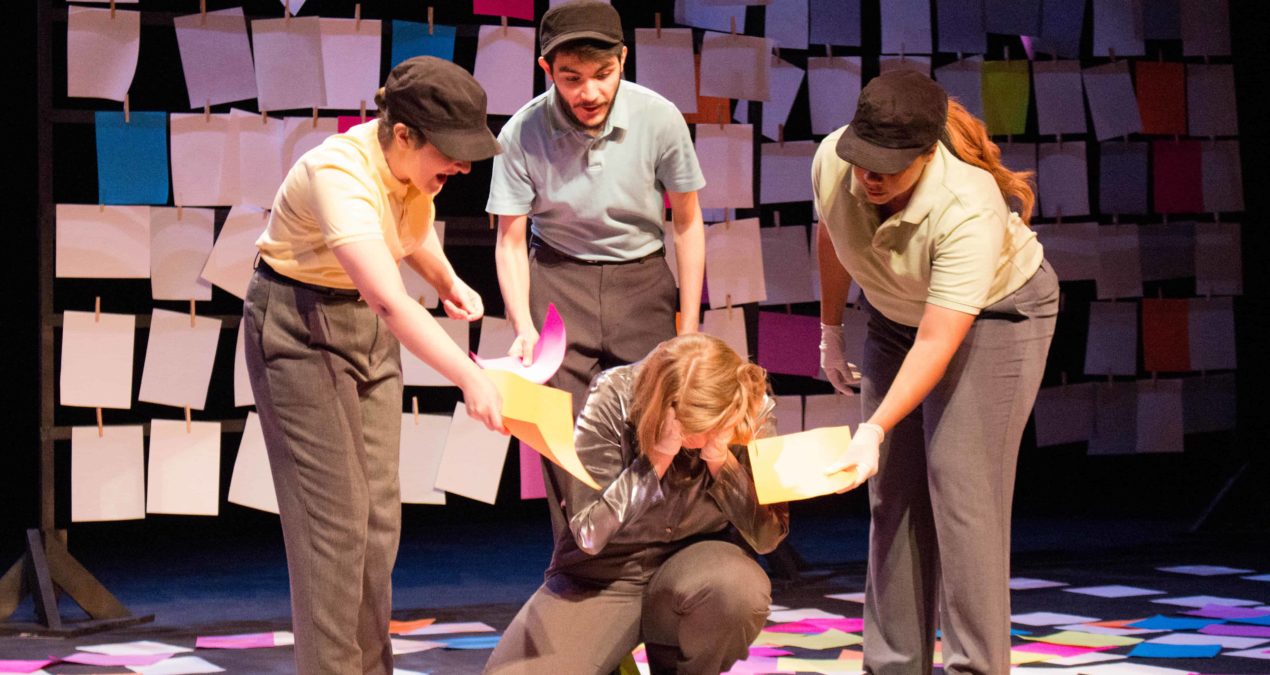 ‘I Am Jonathan:’ a scary look at the power of artificial intelligence

What would happen if our own electronic resources turned against us? “I Am Jonathan” explored that very notion with intensity and visual panache.

The show was produced by  Available Light Theatre, a company that regularly premieres new, original work based in downtown Columbus.

For eight months, the ensemble of seven Denison students and the Available Light Theatre created I Am Jonathan from the open-ended idea of “lost history.”

The result was a futuristic “What if?” centered around Jonathan, an artificial intelligence computer that learns and updates its memory as it progresses through time; but things start to become very strange when siblings David and Kelle, played by Griffin Baer ‘18 and Jennifer Beck ‘15, realize that Jonathan absorbs a little too much information than they are comfortable with.

Things get even more complicated when Kelle tries to make sense of what is happening and discovers that their entire society is controlled by Jonathan, who has learned how to manipulate memory.

The play draws many of its themes from George Orwell’s “1984,” with big-brother’s power in the foreground of the production value.

Stylistically, the show was excellent. The staging and symbolism of a tech-central society resonated perfectly, especially with the use of cubist elements like bright paper and electrical cords on set. Intricate choices like Emma Skorpa ‘15’s headphones emitting jazz in conflict moments added to the Orwell-ian illusion of a society unable to control even their own memories.

That being said, it was easy to get lost in the symbolism to the point  where the story became murky.

It’s easy to appreciate the commitment to the conceptual ideas behind the script, but in terms of plot, it was also easy to wonder if the audience was missing something.

Perhaps that was due to the fact that about 40 percent of the script seemed to be spoken from the mechanical voice of Jonathan, which left the audience disconnected from the characters they wanted and needed to get to know.

From the program, the audience was able to gather that the plentiful amount of unnamed characters had specific duties to the plot.

The searcher, the teacher, the destroyer and the collector were all active members of the ensemble on stage, but it was difficult to grasp what their purpose was.

It could be argued that with more time and development focused on the script and less time devoted to the symbolic understanding of the plot, the audience would have gotten the characterization they needed.

However, to the actor’s credit, the other 60 percent of the script was clear and forthright. Especially between Kelle and David, the dialogue was succinct, honest and close.

Impressively, they managed to create a sibling bond both with each other and the “Jonathan” computer programs was meaningful and truthful. The entire cast completed an impressive challenge: they successfully created a completely new work based only on their own ideas.

The topic that they chose was engaging and relevant; they carried themselves as actors with a believability that is incredibly hard to garner. Indeed, if the audience had more insight into who these people were and the subtext that seemed to fall behind the plotline of Jonathan’s effects on society, they would have understood the symbolism far better. All in all, a difficult job well done.