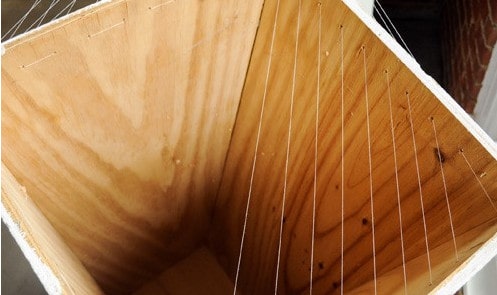 Entering the gallery, I found myself frozen by a daunting decision. Which way to go, left or right? As I chose left, I saw the barely visible strings jutting overhead, peering out from the walls, creeping from below. I stepped forward, tense, attempting to avoid the string as if they were spider webs.

As a senior, with college ending and approached by choices of where to move and occupations to follow, the exciting apprehension was not unusual. Others who traveled through Hall’s world filled with abstract representations of the body also found her art resonated with them.

“I didn’t know what to expect, but I walked into [the] show and really felt a connection to it,” Isabel Randolph ’16 said.

Along with the sprawling sets of string, boxes popped, two-by-fours jutted from the walls, sheets hung limply like tired bodies and an occasional splash of color followed by a constant bed-linen-billowing breeze begged for attention.

“The result is a quietness that screams with tension,” Hall said, whose art is a combination of compositional painting and material-based sculpture.

As I walked through the gallery, peering from piece to piece, the “bodies” exited their shells, manifesting into whispered words and idea provoking thoughts.

It all had an on-point similarity with one of Hall’s influences, Marina Abramović.

“I intend the public to have a real experience with the objects, but once the experience is achieved, the object is not important anymore…To me art would be a transmission of energy between people, without any kind of barrier,” Hall quoted Abramović in her thesis catalog.

According to Hall, the central idea of this many “framed” exhibition is that we all “attempt to make a connection.”

And then it was obvious, leaning boxes held their poses, planks of wood kept from dropping to the ground, wood adrift held still, all because the string tied everything together, connected. Other times, the connection failed. String struck walls unable to reach anything, anyone.

In terms of the red, orange and blue paint-dashed white walls, Hall presented a picture of simplicity that placated our need for fairy-tale endings and contradiction. The colors transported the viewer into a field of flowers providing a purely aesthetic feel that didn’t necessarily need interpretation. It was a brief respite from the “quietness that screams with tension.”

Arriving in the largest expanse of the room, a sight struck me. Four strings crossed from one end to the other, culminating into the tip of a hammock-shaped sheet. As a History major, the space and distance seemed to express interconnectivity between people, past and present.

Further down the rabbit hole, faint words on the wall pulled the viewer into an Alice and Wonderland playground as if we were meant to chase a white rabbit into the roots of our own identity, by seeing the reflections of ourselves in her pieces.

As Hall said about the physical body in her thesis catalog, I say about her work: “Why try to contain it?” Although the exhibition will end Sunday, the connections her art represents can persist as we carry them out of Bryant, into our friendships, and eventually to a world beyond the Hill.

Hypnotist Sailesh returns to campus, proves to be a smash hit