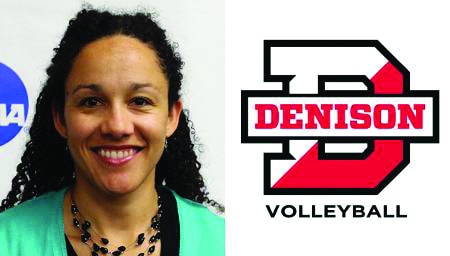 The connection between Denison’s new volleyball coach and the sport she loves started early on in life. “I like to joke that I was born into volleyball,” Coach Sarah Graves explains. “My mother played volleyball leagues when she was pregnant with me.”

Graves shared her personal connection to the sport she loves, and that she will now coach as the school’s newly minted head volleyball coach. Graves will take over the role of departing head coach Lynsey Whisner, who moved up into a new position as  the director of club sports, intramurals and student wellness.

With her family connection deeply rooting her to the sport, Graves picked up playing herself. “I first got involved like a lot of women do, seventh grade intramurals,” she said.

Despite her love for the sport,  Graves did not jump directly into the volleyball field as a profession. Graves  eventually became a student-athlete at Macalester College where she graduated with a communications degree. She cites her years at Macalester as crucial to her respect and admiration for the Denison community.

Graves says, “I went to Macalester College in Saint Paul, a school very similar to Denison. Another reason I appreciate it here, people who take their academics seriously.”

Graves will bring a strong work ethic to the program. After her years at Macalester as a student, she worked in public relations and strategic communications while coaching volleyball on the side.

Fate seemed to bring her back to volleyball. “I returned to the Twin Cities where Macalester is and I hadn’t planned on coaching but I was asked by a coaching mentor who was having some health problems and long story short six years later I was still with the program.”

More than half a decade later and Graves found herself on the radar for Denison’s head coaching vacancy. “I’m not a fatalist but I stumbled upon the position,” she says. “Uncovering little gems about the university really made it align with the value I have as a coach.”

Graves comes to Denison with the full backing of the athletic department and of Athletic Director Nan Carney-DeBord. In a statement to The Denisonian, Debord said, “We are delighted Coach Graves has joined the Denison Athletics Family. Her experience, competitive drive and superior ability to mentor students and student-athletes will impact the winning volleyball tradition.”

Part of Graves’ philosophy on liberal arts is that “one of our jobs is as coaches, as faculty, is to help you guys be a better version of yourself as you leave our doors.”  Graves went on to highlight her strong feelings towards the Denison community’s efforts to band together and help one another. “It is really cool as a coach,” she said, “me helping my athletes  become better people,  better athletes and students is supported  by everyone else on campus too.”

Graves is confident with the state of the women’s volleyball program. “The program is in good shape,” she said. “We have a great group of women who are athletic and love the game. We’ve got a lot of weapons out on the court.”

Strategically, Graves has big plans and ideas to continue to push Denison forward. “We are right at that cusp and my goal is to push us over and get us to the top of the conference,” she said.

For the long term, Graves wants to shift the team’s focus toward “competing for at-large bids and getting into the tournament.”

Graves offered a piece of advice to Denison’s student athletes: “The biggest thing is to enjoy every minute of it. Do not let the distractions of fear and judgment get in the way.”