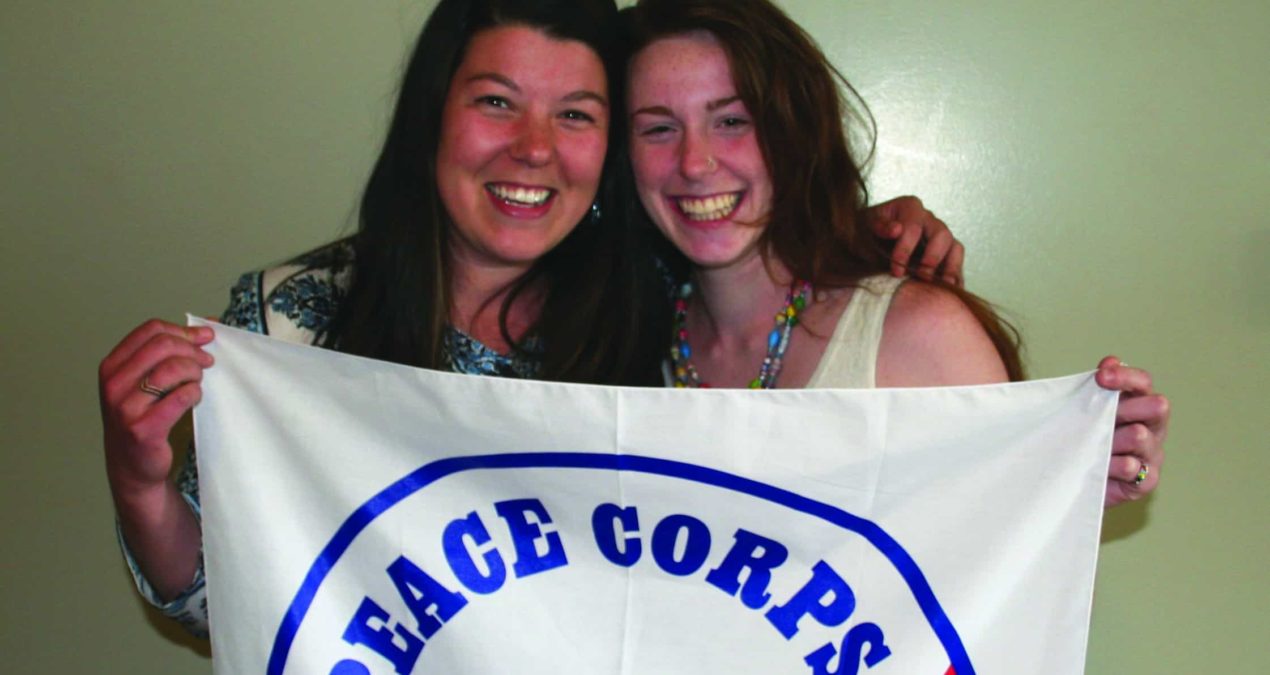 Roomates start a new journey in the Peace Corps

Each year, thousands of people apply to become part of the Peace Corps. This year, at a record high since 1994, between 16,000 and 17,000 applications were received with only a few hundred of those being accepted. It is extremely rare that roommates of two years, Megan Hart ‘15 and Miranda Russell ‘15, will both be entering the Peace Corps this fall.

The application process for the Peace Corps is intense. Hart explains that the most time-consuming part was the 500 word essay that she was required to write. She said that she was also required to provide basic background information and recommendations. “Overall it wasn’t super painful,” Hart explains, “I applied Dec. 14 and got notification that they were considering me in mid January. On Feb. 10 I had an interview and got an offer the same day. It all happened very quickly.”

Russell explains that the process is not the same for everyone. Although the process has been shortened significantly in recent years, it can still take around six months. Russell said, “I applied Dec. 31 and got the invite March 4. It really varies for everyone.”

Hart was attracted to the Peace Corps because of her variety of interests. She said that she is “a person who has a lot of random skills. I can sew, I’m really good at gardening and I’m good at working with people.” On campus, Hart is involved with ultimate frisbee, she is one of the co-leaders on the interfaith dialogue group, she is a sustainability fellow, she is on the green team and a handful of other groups. The Environmental Studies major is also involved in various community service activities off campus.

Hart loves being outside which has led her in the direction of the agricultural sector of the Peace Corps. “My work will depend on what the community needs,” Hart said. “I’m doing agribusiness probably working with the economic systems of agricultural products.” She will leave on Sept. 8 for Cameroon.

Russell is taking a slightly different route in the Peace Corps. She said, “I’m really passionate about and interested in development work and particularly healthcare and how it applies to women.” She is a biology major, captain of the women’s rugby team, was treasurer of Green Team, secretary for DCGA , a SHARE Advocate, vice president of the Outdoors Club and has an extreme passion for women’s health.

“I think what got me first interested in the Peace Corps is the awareness of the privileges I’ve had as an American and to go to a liberal arts school,” Russell said. She explained that “these are all privileges that I have that I know other people do not have.” She added, “I think that the Peace Corps is doing it right sending volunteers into communities and adapting to the culture and engaging in the culture exchange while providing a needed service.”

Russell will be leaving on Sept. 22 for Mozambique.

Though the Peace Corps will provide many amazing opportunities for both Hart and Russell, they do express nervous feelings. “It’s definitely a courage thing,” Hart said. Russell said, “My biggest worry is the langages.”

Both will be spending over two years out of the country and this experience will require them to reach outside of their comfort zones, but Hart says they have been preparing together.