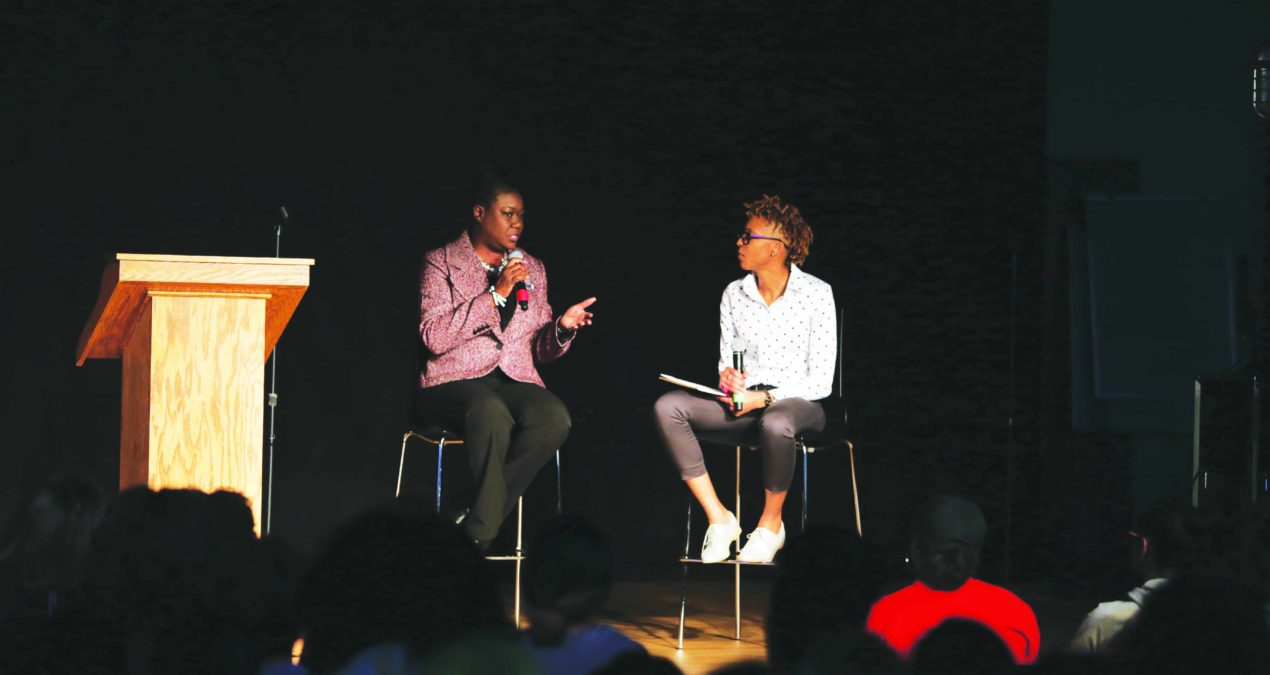 When Sybrina Fulton came to the stage in the over-crowded Nest on April 15, she assured one thing before she even began speaking: she was not there to give a speech or a lecture of any sorts. Instead, she was there to simply share her story.

She said, “This is why it’s important for me to speak at different universities… Because I have to let them hear my story [so that they can understand] what I’ve been through.”

Fulton was brought to campus by UPC and Sustained Dialogue.

Fulton is the mother of Trayvon Martin, a 17-year-old teenager killed in February 2014 by George Zimmerman, who believed Martin to be guilty of breaking into homes in his Florida neighborhood. Zimmerman followed Martin and shot and killed him after a brief scuffle between the teenager and the then 29-year-old man. Zimmerman, however, was found not guilty by the Florida courts because of the Stand Your Ground Law, which allows a person who perceives himself or herself to be  in danger to use deadly self-defense methods to get away from the attacker. The story quickly picked up in the mainstream media, causing nationwide controversy  over the  incident.

But before her son was killed, Fulton said that she lived a very low-profile life. She said, “I was average. I had a house, a car and two kids. I still have two kids, but one  is in heaven and one is on earth.” Martin, she said, was always an affectionate teenager and was frequently called a “momma’s boy,” who made it his mission to take      care of  her.

In the aftermath of her son’s death, Fulton said that several media sources “victimized [her] son” by explaining that he “looked suspicious.”

Even though the judge ruled that Zimmerman was not guilty for second degree murder and manslaughter, Fulton maintains that her son was murdered because of the   color of his skin. She said, “The worst day of my life was attending [Martin’s] funeral and knowing that he was killed because of racial profiling.”

Facing these issues, Fulton decided that the best way to honor her son’s memory was to ensure that “he did not die in vain.” So, she “committed [her] life to making  the change she wanted to see.”

She said, “It did not come easily, and [she] would not have signed up for it or sacrificed [her] son.”

Fulton began giving speeches across the country and travelled to Geneva to speak to the United Nations about what exactly happened to her son. In addition, she  created  the Trayvon Martin Foundation, which is meant to “create awareness of how violent crime impacts our world and to provide support, advocacy and education  to inner-city families,” according to its website.

Chris Morini ‘16, a history major from Cedar Grove, NJ, said, “I thought it was really cool to hear some one who actually went through the trauma and not just the community who was outraged by what happened. Plus, given the context of the speech, with ferguson, Baltimore, Eric garner, etc., it was really engaging and it contributed a lot more to the discussion on racial and social change.”