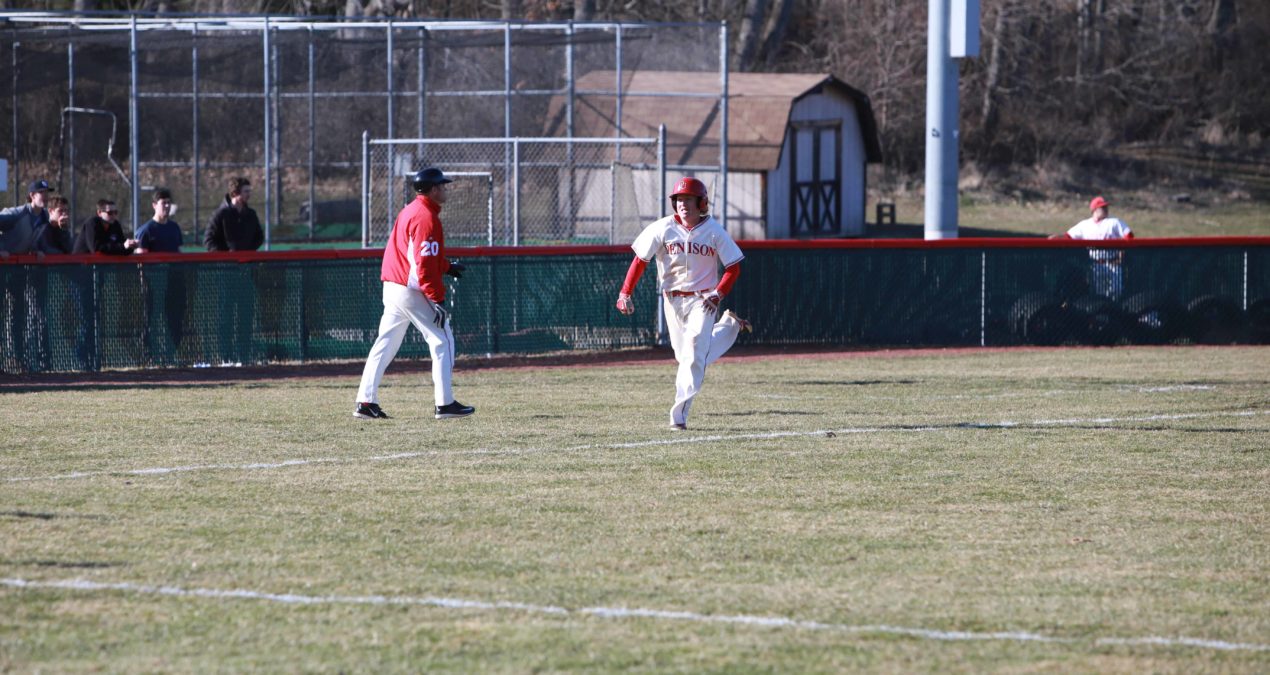 With less than a month until the NCAC Crossover Weekend, the Big Red baseball team is struggling with the same issue that haunted it last season: consistency.

The squad opened conference play this week with a pair of doubleheaders against DePauw on April 4 and April 5, which they split.  This leaves their overall 2015 record at an underwhelming 9-9.

Infielder Ryan Mulligan ‘15 was disappointed by the squad’s slow start.

“To this point this year we just haven’t played well,” Mulligan said. “We have the talent to be better we just aren’t playing better and it is leading to us performing poorly in key situations.”

The Big Red certainly did not have problems in crunch-time situations in the twinbill opener on April 4.  After pitcher Zach Huarte ‘18 gave up a pair of runs to the Tigers in the fourth and fifth innings, DU’s streaky offense, which had been silent all game, came alive.

In the final inning, fleet-footed Georgie Montes ‘15 lit the fuse and reached base with an infield single.  With one out, Ryan Mulligan pulled the ball to right field and sent Montes to third.  In the following at-bat, Charlie Apfelbach ‘15 smashed a mistake pitch to deep left field.

The ball bounced off the wall for a triple to tie the game 2-2.  After a Tiger pitching change, Coach Deegan called Alex Enrique ‘17 in to pinch hit.  The lefty made the most of the opportunity and powered a single to the right side to score Apfelbach from third.

Thanks to a strong late inning pitching performance from Mulligan, the Big Red sealed the first game 3-2.

Mulligan was proud of the older players’ contributions in this week’s matchups.

“I would say one of our greatest strengths is our experience. We have a number of upperclassmen that have played and know what it is like to be in a big game situation. This experience with talented freshman can lead to a good season for us.”

In the second match of the four game series, the Big Red’s pitching came unraveled late in the game.  Entering the bottom of the sixth, the score was tied at two owing to a strong start from Ian Barry ‘15 and runs from Evan Flax ‘17 and Charlie Apfelbach.

The DePauw offense began producing in the sixth, coming away with two runs, and exploded in the seventh with a five run tear off of DU pitchers JT Trimble ‘17 and Connor Hanrahan ‘17. Even with two hits from Lascelles Lagares ‘15 and two runs from Apfelbach, the Big Red failed to recover and fell 9-6.

Again, DU split their doubleheader against DePauw in the second day of the series.  The third game against the Tigers was highlighted by a five-run second inning from the Big Red lineup.

With nine hits (two of them from Evan Flax), DU was able to protect a lead and come away with an 8-6 win. The win marks the third for starting pitcher, Johnny Funkhouser ‘17, who threw 4.2 innings.

In the last game of the week, the Big Red were simply unable to keep up with the Tiger bats in a 10-9 shootout.  After a six-run third inning for DePauw off of Kyle Colgain ‘15, the Big Red slowly chipped back and pulled even in the top of the fifth.  However, DU’s young pitching staff could not withstand the Tiger attack and the squad returned to a .500 record at 9-9.

The team will look to improve their consistency on April 7 when they travel to Columbus, Ohio to battle the Capital University Crusaders.