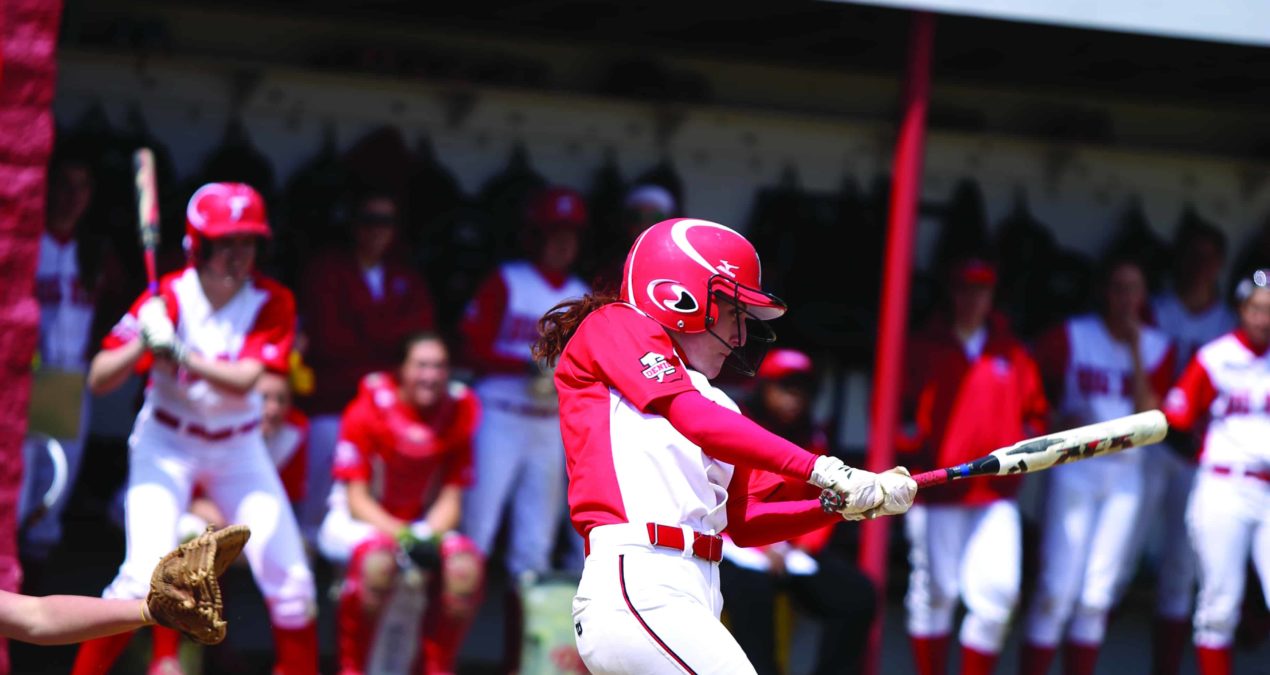 In the face of a winless conference record, the Big Red utilized fundamental fielding and efficient offensive production to beat the Allegheny Gators twice in the same day. In the first game of the doubleheader, Lauren Secaras ’18 was caught in a pitchers duel and threw a 7-inning shutout against senior pitcher Caitlin Nealer.

“I focus on throwing strikes and then whatever happens happens,” Secaras said. “I trust my defense to make the outs and my catcher to call the right pitches, and this makes me a lot less nervous.” Secaras’ sharp stuff, coupled with the errorless defense behind her, made her nearly unhittable in her outing. Secaras credits her changeup as to how she was so effective on the mound.

“The changeup was working really well on Saturday,” Secaras said. “At the beginning of the season, I had trouble consistently throwing this pitch for a strike but I’ve worked on it throughout the winter and now it’s become one of my favorite pitches. I like knowing I can throw it at any time and have it be an effective pitch.”

After Denison’s 2-0 win, the team needed to enjoy the victory but not let their motivation dip going into the second game of the day.

“Once the first game is over, it can be tempting to “check out” mentally, and because our games typically last an hour and a half to two hours each, staying focused and energized for that long can be exhausting,” shortstop Ryan Lee ’17 said. “I like to use the first game as motivation for the second.”

The afternoon game showed off Denison’s firepower along with a couple crucial Allegheny errors, leading to six runs in just one inning. Down by two in the bottom of the fifth, the team needed a spark any way they could get it. This spark came from Erin Laswell ‘17, who led off by getting hit by a pitch.

Capitalizing on mistakes would characterize the six-run rally for the Big Red, benefitting from two walks and an error from the Gators. These mistakes along with singles from Marlie Mounts ’18, Julie Rooney ’15, and a double from Ryan Lee ’17, would score four runs and allow Laswell to get to bat for the second time of the inning to score two more insurance runs.

For the Gators, to be ahead for so long in the game then to be down by 4 runs in a matter of minutes can totally decimate any positivity a team had the entire day.

“At this point in our softball careers, we all know how to swing a bat and field a ground ball, but what can destroy us is what goes on between our ears,” Lee said. In the Big Red’s case, their minds were at ease after Kerry Hager ’17 secured the final out of the day.

“The hard work that my coaches and teammates have put into preparing for these games has helped us become more confident with ourselves and with our teammates,” Lee said.

The women will try to carry this confidence into the rest of their spring season, highlighted by matchups against DePauw, Wittenberg, and Ohio Wesleyan, all of whom are currently ahead of Denison in the NCAC standings.