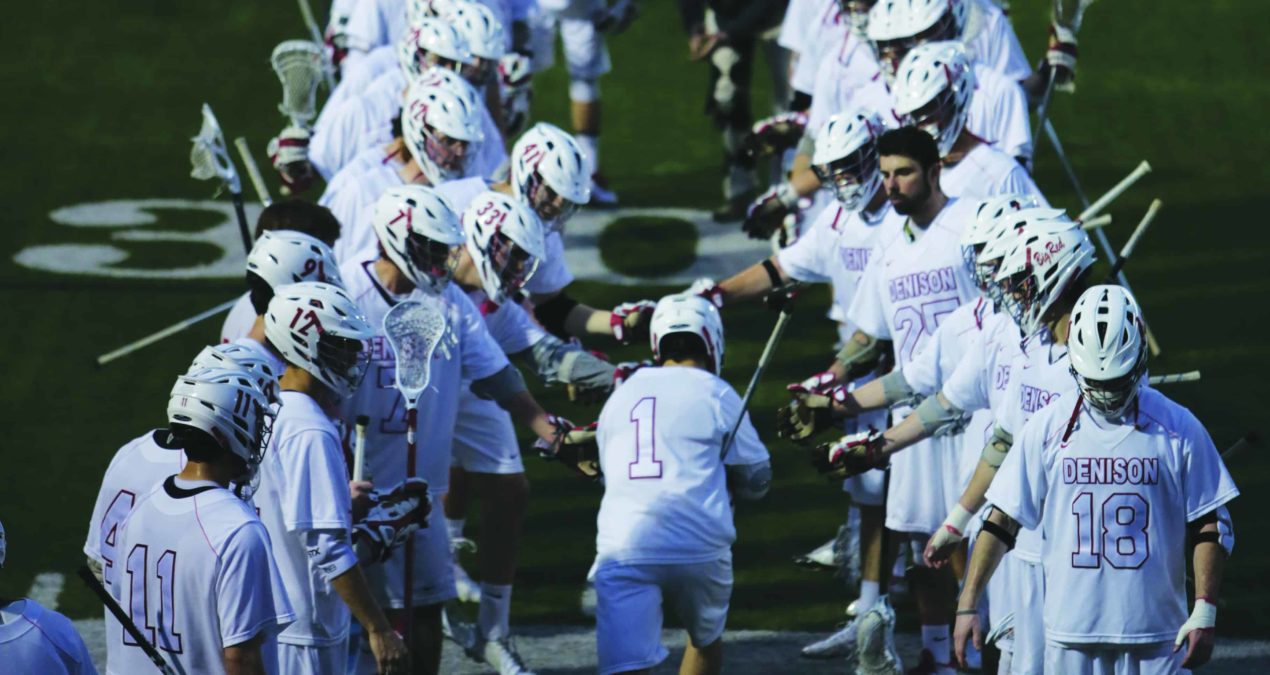 Men’s lax battles, loses to OWU by one in O.T.

Similar to their regular season matchup on April 12, the Bishops came out on top, 9-8. The competition was strong; the two teams’ toil and ferocity, uncanny.

With 36 seconds left in overtime, Ohio Wesleyan’s Luke Leyden intercepted a passed ball in the Big Red’s defensive zone, giving him the game-winning breakaway opportunity. But it certainly was not that one play that resulted in the final score. Ohio Wesleyan’s adaptability and effort in capitalizing on Denison errors ultimately led them to their NCAC championship.

Blair Farinholt ‘16 paced the Big Red in both goals and assists, finding the back of the net three times and dishing three to James Meager ‘16 and Will Donohue ‘17. Ben Duhoski ‘18 led Denison’s defense statistically, with five ground balls and a caused turnover. Off of the draw, Denison collected twelve of the game’s twenty-one face-offs, thanks to the efforts of Eric Baumgardner ‘16.

While the team has to say farewell to a number of key players from this year’s graduating class, such as All-American defenseman Drew Newman ‘15, midfielder Ben Hearn ‘15 and attacker Nick Caravana ‘15, underclassmen like Jamie McCahon ‘17 say that they “are confident that the next class of seniors will step up to the occasion and fill the roles well.”

The current juniors to whom McCahon is referring have a noticeable presence on the field, and the tenacity and motivation to continue improving upon their previous seasons. In addition to the rising senior class are fervid rising juniors like attacker Will Donohue ‘17, defenseman Teddy Sawyer ‘17 and attacker Liam Rooney ‘17, who just recently earned honors as the United States Intercollegiate Lacrosse Association’s Offensive Player of the Week for Division III lacrosse.

Looking back on the 2015 season, it is challenging for most to forget the Big Red’s infamous first two games. For a program that is used to only losing one or two games throughout the entire season (for example, the 2014 season), falling to #15 Washington & Lee and #17 Roanoke was nearly unfathomable. In that situation, it would have been easy for any team to fall in their place and lose sight of their original goals.

On the contrary, Denison fought back; McCahon said, “It took us the better half of the season to find our identity as a team, but we really came together at the end – we finished strong and that was most important.”

And certainly, there is much to smile about when looking back at a season and squad that truly epitomized the act of overcoming adversity. Per usual, in Denison fashion, the Big Red united as a team–a family–and fought through waves of doubts, injuries and the dismal Ohio weather, making this season one to remember.