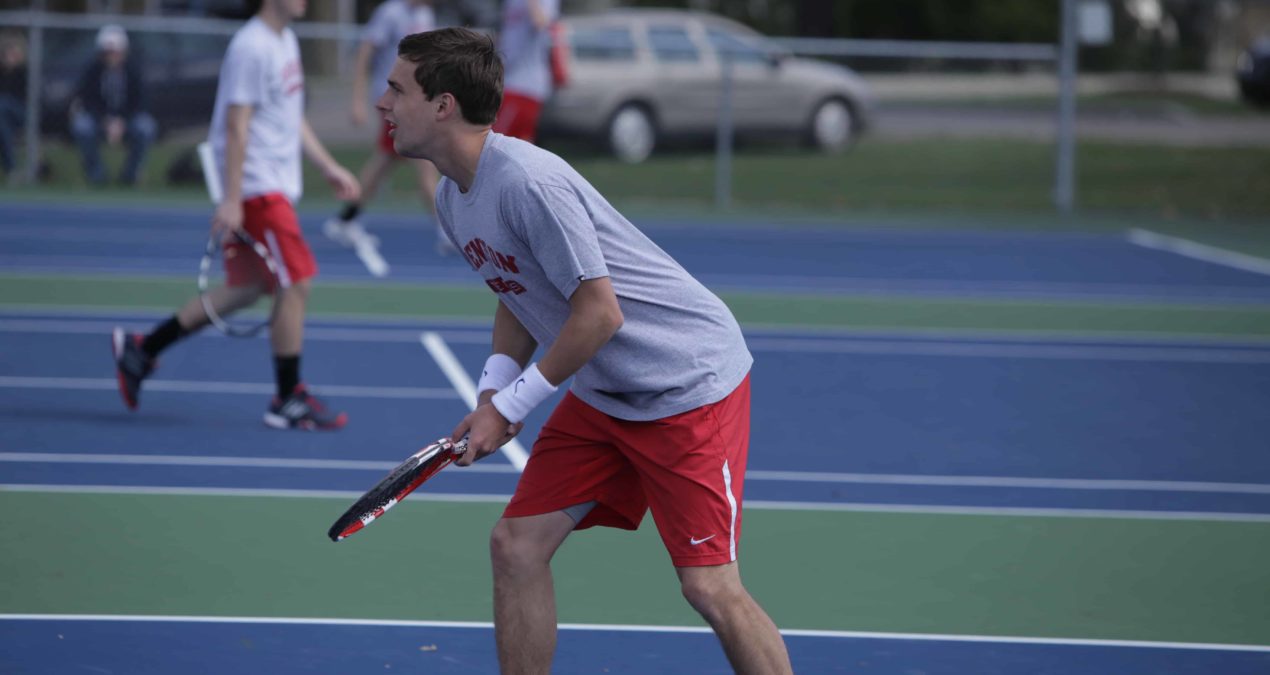 The NCAC tournament ended with the Big Red earning third place overall after dominating Oberlin 5-0 in the third place match this past Sunday. Grant Veltman ‘15 finished his Denison career with 119 wins in singles and doubles.

Building up to the win on Sunday, the Big Red earned a semifinal berth on Friday after defeating Allegheny, 5-1. Rain forced Saturday’s semifinal to be held at Mitchell Fieldhouse for a de facto home match against a talented DePauw team.

The match ended after five and half hours of thrilling play but unfortunately Denison came up just short losing 5-3 overall. Denison fell behind early after dropping two straight doubles matches but were later redeemed by a Grant Veltman ‘15 and Jackson O’Gorman-Bean ‘16 win. DePauw then came within just one point of victory after going up 4-1 following back to back singles victories.

Now trailing 4-1, the Big Red needed to win the remainder of their matches to beat DePauw

Denison immediately fought back with a three set win coming at the hands of Jack O’Koniewski ‘18, who redeemed his three set loss from just two weeks ago.

Veltman found himself entangled in a thrilling match at No. 1 singles against Chris Bertolini, the No. 10 player in the Central Region. After dropping the first set 6-1, Veltman came back with a head of steam to outlast Bertolini and win the second set on a 7-3 12 point tiebreaker. The final set started with both players holding serve up to 2-2, until Veltman charged ahead winning the remaining 4 games, breaking Bertolini twice.

The deciding match was determined in the early morning hours of Sunday, when Denison’s Owen Smith ‘17 lost a close but heartbreaking match to DePauw’s Matt Santen, 7-5, 1-6 and 6-2.

The loss meant that Denison would now face Oberlin in a battle for third place at the NCAC tournament.

Against Oberlin, Denison managed to start off hot sweeping the Yeomen in doubles. The hot streak continued in singles with match clinching victories from Casey Cempre ‘15, who dominated 6-1, 6-0, and O’Koniewski who also pulled off a lopsided 6-0, 6-2 win.

With the season now over, Denison (12-10) looks ahead to next season.

Graduating seniors include Jeffrey LoDuca ‘15, Veltman and Cempre. Veltman offered a piece of advice for future teams: “It’s important to maintain a strong bond within the team. Although college tennis can at times seem to be a very individual sport, I believe team chemistry is a huge component to a successful season.”

O’Gorman-Bean described the importance of seniors like Veltman when stating, “This year’s senior class has been key in terms of preparing the younger members for their career here at Denison. Their work ethic has really worn off on the freshmen, who will be able to make a huge impact next year for us as sophomores.”

The legacy the seniors left will be crucial for Denison’s success in the coming years.