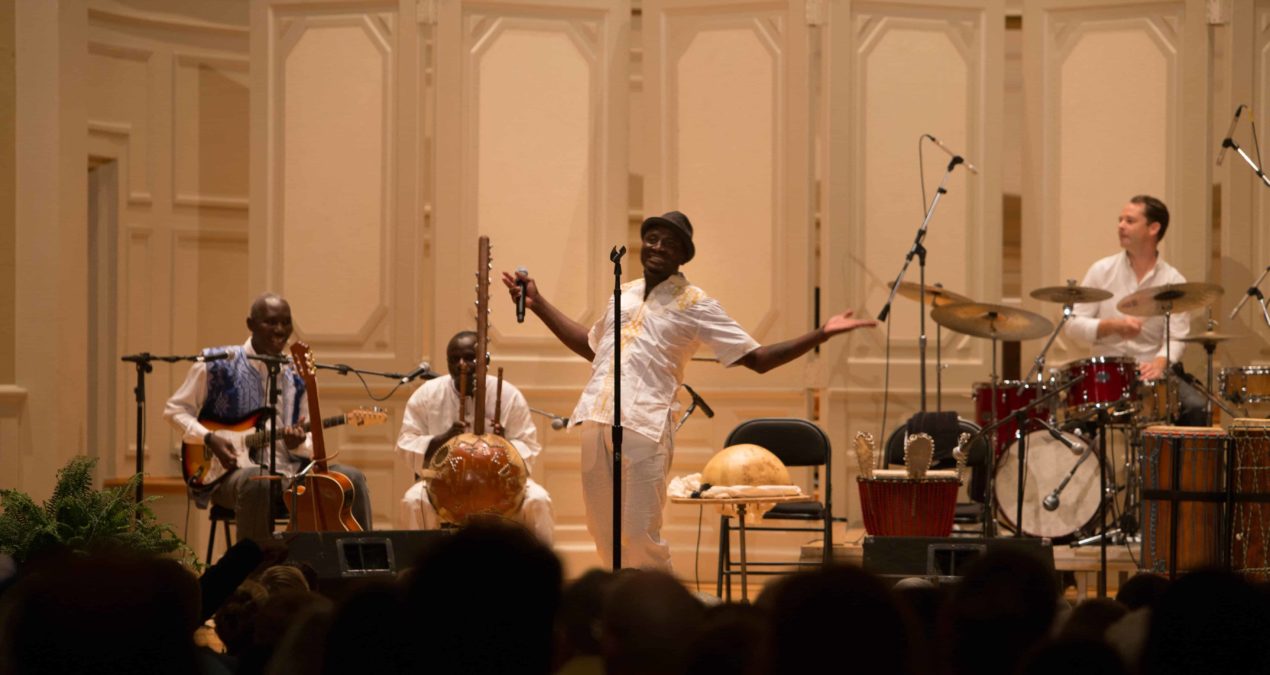 The first event of the Vail Series this academic year drew many people from both the school and the community on Sept. 18. Swasey Chapel was packed in anticipation of the contemporary African band Dafra Kura.

There was a certain excitement in the room, a buzzing from short chatters that come when an audience doesn’t yet know what wonderful talent the Vail Series brings and possibly from not knowing what to expect from a new and eclectic artist.

The group opened with an energetic African dance number that perked the audience’s ears and eyes.

Dafra Kura, a West African band comprised of members Olivier Tarpaga, Boubacar Djiga and Wilfried Souly, began with a calm, folksy tune that wasn’t particularly exciting at first. At the end of the song, Tarpaga stood at the front of the stage.

“I want to see the smile on your face,” he said to the audience. “Music is the face of the people.”

After a bit of a slow start, the performance continued, this time with a much more engaged audience. The mood softened. People weren’t so stiff and some had even began to bob their heads up and down with the music, or sway slightly.

Another treat was the presence of Pete Mills and Seth Rogers on the stage, two of Denison’s own.

They seemed to visibly enjoy the chance to perform with such talented artists, and Tarpaga expressed extreme gratitude in having the two of them there.

He told the audience, “If I come to America and cook African food, I have to buy American vegetables,” and so that is why it was important for him to bring Denison into their music. Similarly, Tarpaga was active in including the audience to create the music.

He asked each of the three sections in the chapel to clap out a different rhythm during one song to create harmony and to give the audience a way of participating in the music.

One of the most profound parts of the performance was the deep connection between Dafra Kura and their home. Tarpaga spoke of corruption in West Africa and terrorism, unafraid to use the stage as a way to communicate these wrongs.

He wanted everyone to understand that “they’re cracking down on all musicians who sing against the regime” and that musicians’ homes get burned down, and radio stations destroyed because of what their music communicates.

“I wanna be the man I choose to be,” Tarpaga sang, something particularly relevant to the recent events in his home country.

With that in mind, the band sang their last song with defiance.Tarpaga said, “This song will get us in trouble…I hope my friends…do not get arrested at the airport.”

The song was aggressive and upbeat and, at one point, Tarpaga made the motion of his head being chopped off, commenting on the way the corruption in West Africa has affected their country.

The performance is not one that will soon be forgotten. As the band finished, Tarpaga extended a thank you. “I want to thank the president of the university for supporting the arts,” he said.After all, the Dafra Kura band has left lasting impressions here on how music can affect people and how it can be used for change.

The students also had a new appreciation for Dafra Kura’s music. Raquel Cuellar ’19 said the performance was “super cool…really different from what I usually listen to” and Anh To ’19 said Tarpaga “has so much energy and [Dafra Kura] are so in sync.”

As a freshman, Anh was not sure what to expect from the performance, she said, but she “came with a fresh mind. It sounded so harmon[ious].”

It was apparent that the political influence of the music was also appealing.

Hai Nghiem ’18 said the performance was “really exciting, interactive and exotic” and he liked how the band “talked about the political situation and where they are from.”

As the Vail Series began with an exciting and unique performance this academic year, it will be interesting to see how the Series progresses, continuing in just a few weeks with the Metropolitan Opera Rising Stars Concert on Oct. 8  in Swasey Chapel.