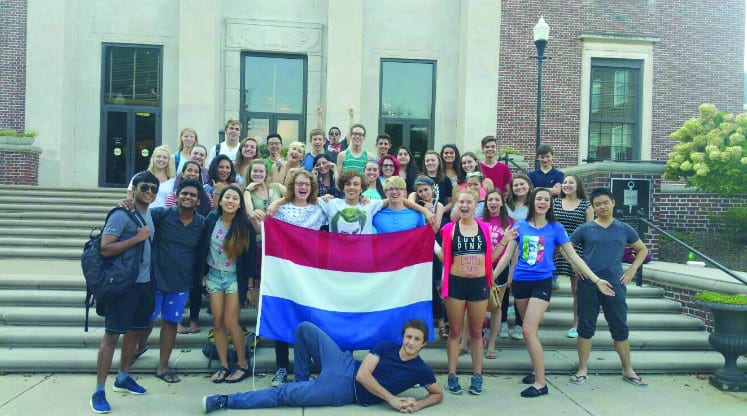 “The most official unofficial club on campus,” proclaims Oli Waldram ‘19 of Basingstock, England. Born out of boredom, a surge of cultural pride and pure spontaneity, the Dutch Club has emerged on Denison’s campus. At the Involvement Fair on Thursday, Sept. 3, three freshmen decided to create an unofficial club on the spot: the Dutch Club. Illegitimate in official university terms, it still managed to get the support of 85 students who signed up for the club at the fair.

Waldram, Isaac Bram Pronk ‘19 and Diego Rubey ‘19, the three founders of the club, have garnered support and intrigue from students about their undefined club.

At the involvement fair, Pronk, a native of Schevenigen, Netherlands, noticed that the “International” table at the fair did not have a Dutch flag.

His disappointment caused him to fetch his Dutch flag from his room, “I brought the flag from my room and the bit began,” Pronk said.

The scene surrounding the club’s creation was haphazard. They took an empty table and began signing people up. “We brought passion, enthusiasm and charisma- people had to sign up,” Rubey said.

“People were overwhelmed by our yelling,” added Pronk. They found themselves with two sheets of students’ emails.

After that Thursday, the club strove to define itself. “We sent out an email explaining our goals and then made a Facebook page to clarify. Our Facebook page now has 157 members,” said Rubey. On Sept. 8, the club had their first official gathering where a club photo was taken. At that meeting, Rubey, from Bogotá, Colombia, formally announced the goals of the club. The central ones being to “find other Dutch students on campus and become an official club recognized by Denison.”

The creators are coming up with new events. “We will have a Dutch culture dinner along with Colombian and British dinner nights,” Rubey said.

They wish to share their different cultures through the club. Furthermore, Pronk said, “We are hoping to make office hours where we can meet outside and talk.”

As to where to find out about upcoming events, Pronk said, “We will keep everyone up to date on official events on the Facebook page. Everyone is welcome.”

“Even though we’re not usually serious, I actually want to make something out of the Dutch Club,” Pronk said.

What started as an entirely satirical “bit” is evolving into something more legitimate. Beneath the creators’ mask of sarcasm and comedy lie sincere motives. The creation of this club itself tells us something about Denison as a whole. “If we would have done this in high school, people would’ve thought we were crazy. The fact that we have so much support shows how accepting Denison is,” Rubey said.

The Dutch Club is currently working on becoming official through Denison, so look out for the Dutch flag on campus

An Uninhibited Look into Life on the Tuscan Countryside

The infamous “Denison Snaps” view on being reported