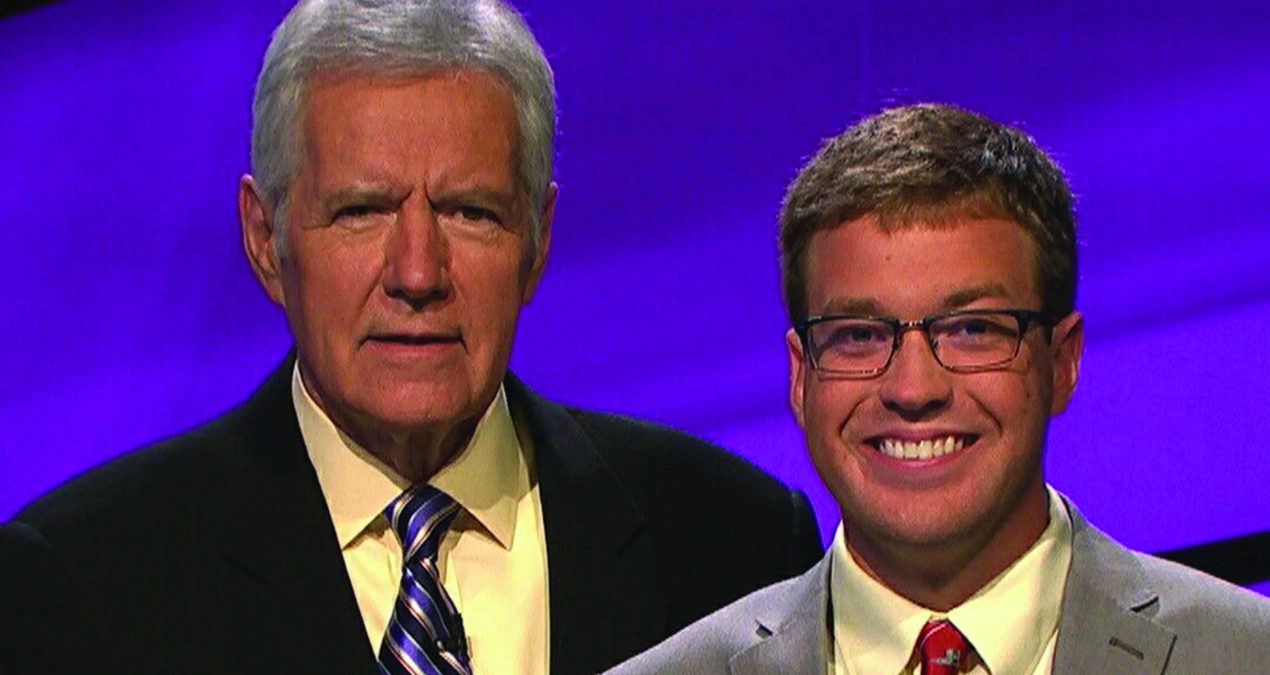 Dylan Parson ’16 shows off his liberal arts education on Jeopardy!

As most Denison seniors were unpacking boxes into their new campus apartments, religion major Dylan Parson ‘16 was walking onto the Sony Pictures lot in Los Angeles. “It was just like you would imagine,” he said, describing thin alleys, walls plastered with large posters for the shows inside. And then he walked into the studio, met fellow contestants and filmed an episode of Jeopardy!

The story of Parson’s cameo on Jeopardy!, however, started long before that filming day in late August. A longtime fan of the show, he auditioned for the college edition during his first year at Denison, without success.

This year, he passed the online test, and flew down to Atlanta in July to compete in a regional audition. Participants took a written test, did a quick interview and participated in practice rounds, to get the feel of the buzzers in a complete mock-up of the studio. Parson finished the audition, and the studio said he would hear back within eighteen months about whether he was on the show.

Two weeks later, Parson got a call: “Hi, I’m Amy from Jeopardy!, I just wanted to check some details.” Despite the possible hang-ups of knowing a Sony employee (from a different division of the company) and a filming day that coincided with move-in, Parson was selected, and flew to L.A. in late July.

His girlfriend Stormie Hockenberry, a student at Allegheny College in Meadville, Pa., was just as excited. “When I found out he was going to be on Jeopardy I almost cried,” she said. “He’s worked so hard for this and he’s always wanted to make it onto the show.”

After a briefing and paperwork in the green room, Parson and the other contestants went into what he called a “50 foot tall Cathedral of Jeopardy!,” with purple-draped walls and a full audience. A few practice rounds later, Parson was on stage and ready. “You walk up to the podium, and [the host] Alex Trebek walks out,” Parson said.

In a studio that films five episodes a day, there is an efficient flow, and Parson said the people were part of it. Trebek was “not a celebrity, but more of an uncle or grandpa personality,” and the producer Maggie was a favorite among contestants. “She was great,” Parson said, “it was a very comfortable atmosphere.”

As the filming began, Hockenberry and Parson’s family were watching from the audience. “It was just strange sitting in the audience as the lights came on and the show began to film,” Hockenberry said. “That’s when it actually sank in that this was all real.”

Most of the show’s fanfare, Parson said, is fully created in the studio. “They ask the question, and the music is actually playing around you. It’s the highest pressure moment of your entire life.”

After filming, the studio requires silence about the results of the show until it airs, which Parson thought might be a challenge for his 10-year-old brother. “I was really worried he was not going to last a day,” Parson said, but the secret has been kept.

The show will air this evening, at 7 p.m. in Columbus. But Parson will be back home in Slippery Rock, Pa., a town even smaller than Granville, where his celebrity has made quite a stir. “I’m going to watch it with my brother who didn’t get to go [to the filming],” Parson said.