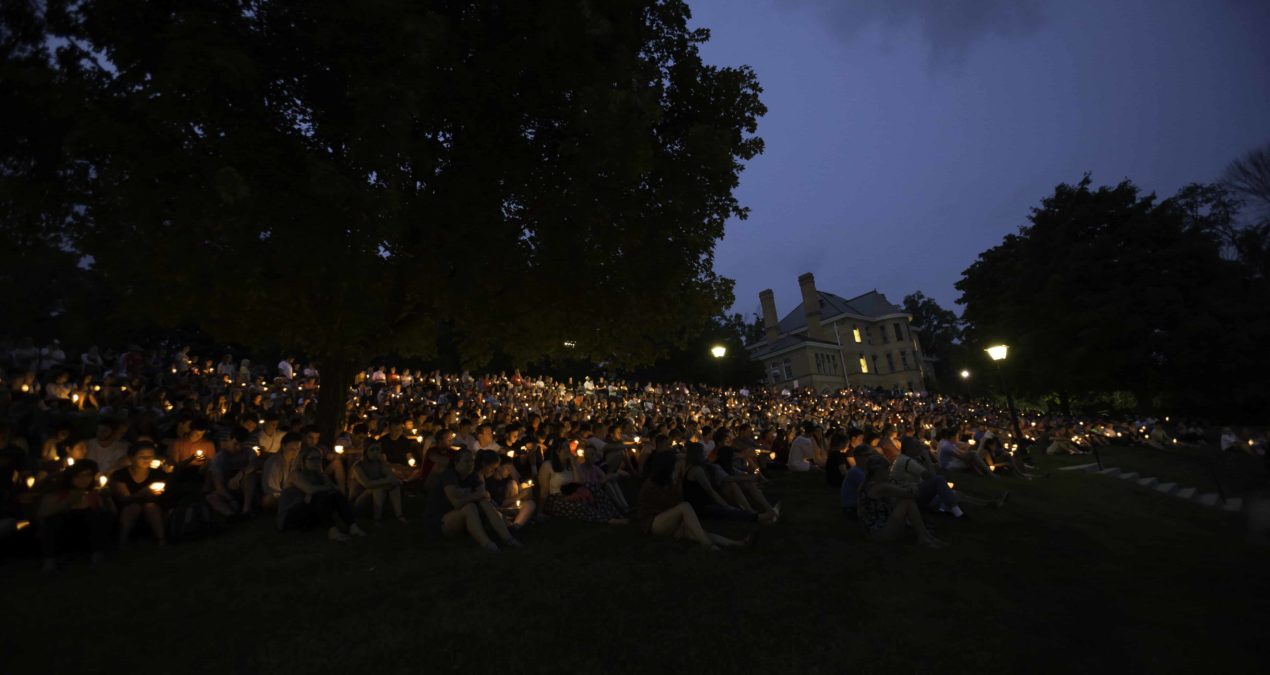 “That smile,” several Denisonians recounted when thinking about the late Wendell Jackson ‘17, “really lit up the room.”

“His smile stayed with me long after I saw him,” President Adam Weinberg said during the memorial service held for Jackson on Sept. 6, 2015, which would have also been Jackson’s 22nd birthday.

Jackson’s friends remembered him as someone who was always determined to push himself and others to do better. Elijah Smoot ‘17, a biology major from Elk Grove, Calif. and one of

Jackson’s summer roommates, recalls a biology project that he worked on with Jackson.

Their task was to collect 100 samples in the Bioreserve, and Smoot was tired and attempted to convince Jackson to return to go back to the main campus and finish the project another day.

But Jackson, undeterred, pushed Smoot to continue working by arguing that he wanted to make sure the project was done right. “He didn’t half-a** anything,” Smoot said.

This attitude was present in the way that he treated his friends and those whom he encountered. He always listened, Smoot said.

“He was the type of person you could tell the good, the bad and the ugly, and he would still love you the same,” said Taylor Wigglesworth ‘18 from New Albany, Ohio during the memorial service.

While at Denison, Jackson was an athletic training major, second year residential assistant and loyal member of the crossfit team. More importantly, “Wendell embraced and embodied the best of our community,” President Weinberg said.

After Jackson was reported missing at about 5:30 p.m. on Aug. 31, students assembled in Herrick Hall to help search for Jackson while members of the Granville Police Department and firefighters searched the Bioreserve and the rest of the wooded areas around Denison’s campus.

The search continued into the night, and helicopters using infrared lights searched the Bioreserve from the sky.

At 8:40 a.m. on Sept. 1, Jackson’s body was found in the Bioreserve by a community service officer. The coroner later reported that Jackson died from suicide by hanging.

President Weinberg invited students to come to Swasey Chapel throughout the day if they wanted a place to congregate to mourn the loss of the 21-year-old Denisonian. Hundreds of students immediately showed up to pay homage to Jackson.

In the days that followed, students continued to mourn the loss of Jackson. On Wednesday, Sept. 3, scores of students came to Davis Plaza to reflect on the community’s loss.

The summer grass was lined with students holding candles in honor of the light that Jackson brought to Denison’s campus during his time on the Hill.

Students, faculty, staff and other members of the extended Denison community also continued to celebrate the life of Jackson by attending his memorial service. Six people from different parts of Jackson’s life, both on and off campus, were invited to talk about their positive experiences and history with the late student.

When one alum. thinks of Jackson he is “reminded of a young man who was passionate about his goals,” said Jessie Mack ‘13, a fellow at Urban Prep Academies, both Jackson and Mack’s high school alma mater.

After Tehilah performed and all six of the presenters spoke about their memories of Jackson, Jackson’s younger sister, Lisa, went on stage and sang “Happy Birthday” to her late brother before blowing out the candle on the stage that was lit for the entirety of the service.

“If he were here today, like he is in spirit, this would mean the world to him,” she said.