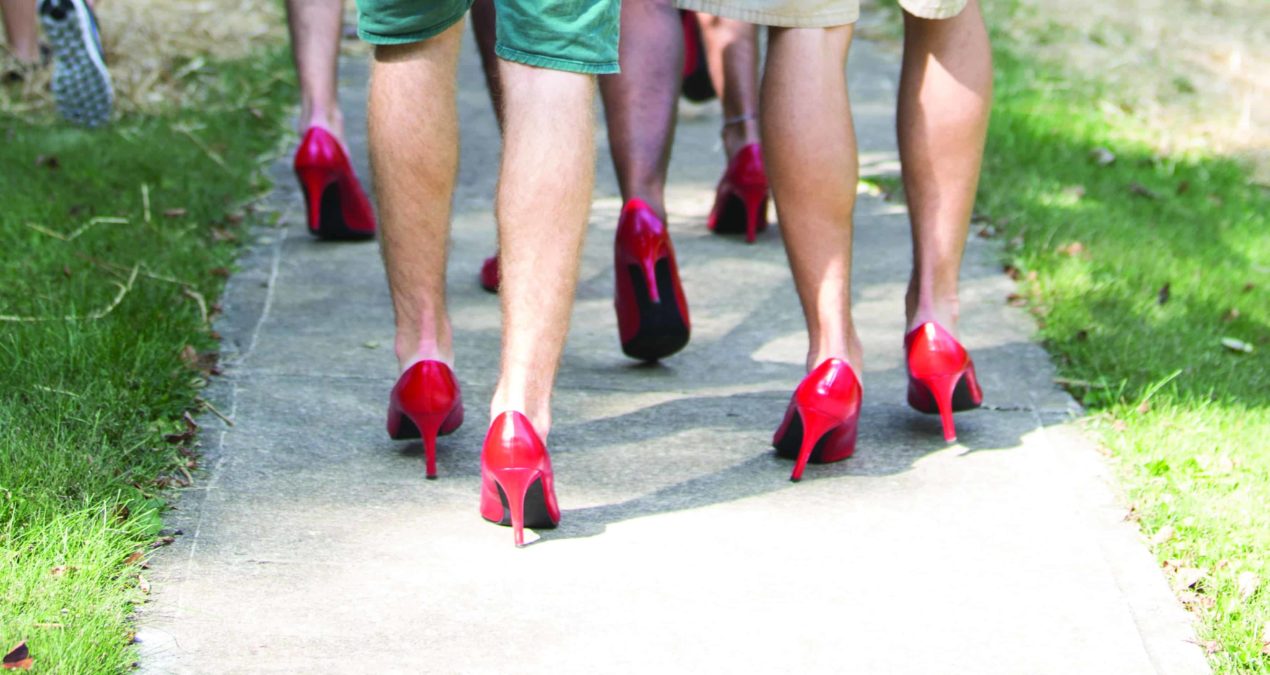 Male Denisonians gathered outside of the Granville Inn on Sept. 18 to don pairs of fire-engine red high heels in preparation for Walk A Mile in Her Shoes, and the trek to Lamson Lodge. As the men slipped on the shoes, murmurs of “how do girls walk in these things?” could be heard.

Walk A Mile in Her Shoes is an international organization whose purpose is to educate men about “the serious causes, effects and remediations to men’s sexualized violence against women.” The organization accomplishes this goal by literally having men walk a mile in women’s heels. IFC and CLIC purchased the organization’s official red heel for the walk. Davis Cameron ‘18, pictured above, among other participants walked a mile from the Granville Inn to Lamson Lodge wearing bright red high heels. Walk a Mile in Her Shoes raises awareness about sexual assault and violence against women.

Fraternity brothers and unaffiliated men walked in silence alongside Denison administrators. Dean Bill Fox, who participated in the event despite a foot injury, said, “I’d like to be in conversation about the issue, but I also respect that it might be a silent reflection period for us to walk together.”

IFC wanted the Granville community to be involved in the conversation about sexual assault, although this did not quite work out, as some Granville residents jeered at the men walking.

“The Granville community was supposed to be more involved than it actually was,” Kriwinsky said. “They were aware it was happening. I understand that a lot of high schoolers, which it seemed like those were the majority of the people laughing, don’t really understand that sexual assault is a real problem on college campuses, which is why we wanted to do it in Granville.”

Toward the end of the walk, relief and understanding were evident across the men’s faces.

“I’ve never been happier to be back in my stinky shoes,” Max Kelly ‘16 said. “It sucks even more to be a survivor of sexual assault and going through physical and mental trauma, and it’s sort of a metaphor of the journey of what women have to go through. This was just a ten minute walk, but people have to go for much longer than that.”

Davis Cameron ‘18 said, “I think that it was a good turnout today, and the more people the better. Awareness is the number one thing.” SHARE, Outlook, the Center for Women and Gender Action, Denison Feminists and Campus Safety tabled at Lamson Lodge after the walk. A representative from the Rape Crisis Center in Newark spoke, along with SHARE vice president Abbie Thill ‘16. Nia D’Emilio ‘16, a survivor, shared her story.

“Nia’s speech at the end was especially needed,” Kriwinsky said. “Most of the stuff wasn’t easy to hear, and I think the stuff that’s not easy to hear is the most important. We can do all these events, but until you really hear from someone who has experienced it, you don’t really know.”

This event is likely to spark a conversation on campus, and hopefully in Granville as well. “The expectations were for people to take it seriously, which it sounds like not 100 percent of the people did, but the vast majority did,” Kriwinsky said. “Hopefully we’ll be able to do this in the future.”

Buying alcohol at IGA? Be prepared