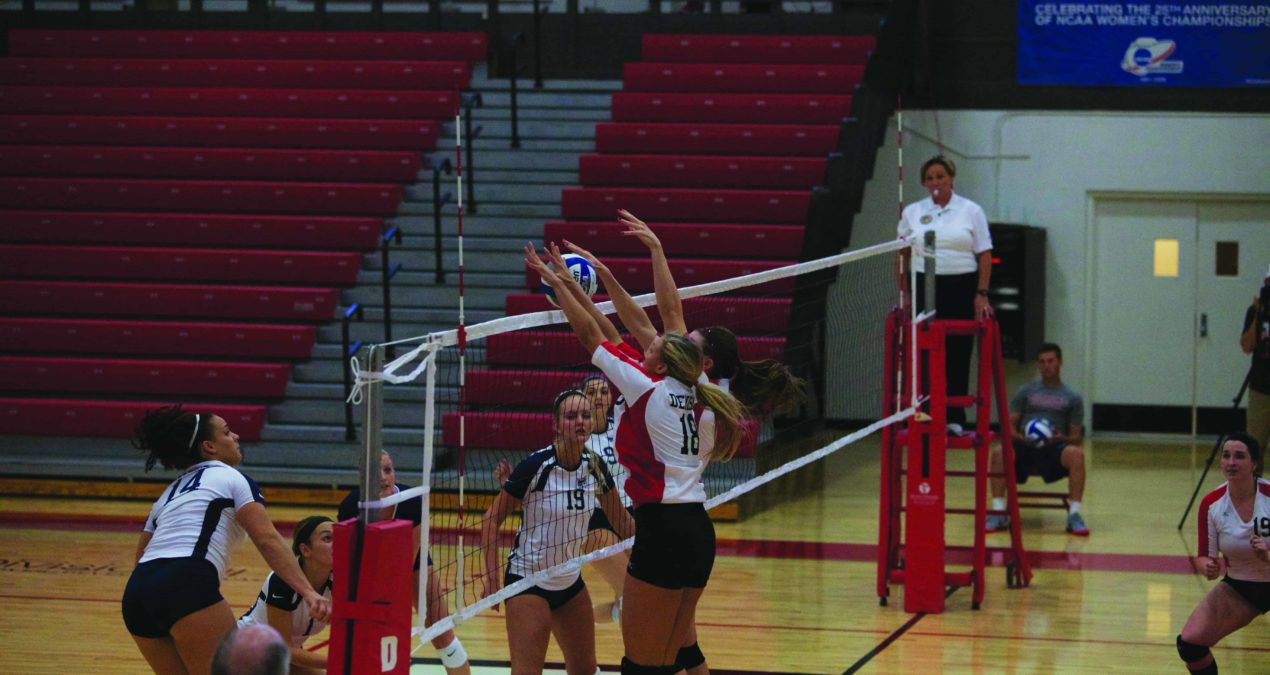 The Big Red swept Marietta in three straight sets on their first match on the newly renovated floor inside Livingston Gymnasium.

“We were certainly really excited to play in the new gym,” Kristen Thewes ’18 said. “We’d been dying to play on it all preseason and it was so much better than the rec gym. I think getting to play on it amped us up for the game more than normal.”

This seemed to be the case as Denison overwhelmed Marietta in the first two sets with hitting percentages of .360 and .321, compared to Marietta’s percentages of .000 and .074.

Rachele Lock ’17 led the offensive charge for the Big Red with nine kills and two block assists. Other notable performances came from Olivia

Buroker ’19, who logged seven kills and eight digs, along with Leah Reinfranck ’18, Elena Lein ’16 and Isabella Pivec ’19 who each garnered five kills for the Big Red. Defensively, Thewes led the team with nine digs.

While commenting on the win Thewes ’18 said, “The game against Marietta was actually my least favorite game of the seasons so far. The match wasn’t as exciting and fun as the other games, we’ve played – it almost seemed like the other team didn’t want to be there.”

Despite this atmosphere, the Big Red made the most of the match. Thewes said, “We were able to try out new things and figure out how we wanted to run our offense. Games like that give us things to continue to work on and perfect so I think that’s how we can continue to carry on the momentum.”

This fall marks the first season for Sarah Graves, the new head volleyball coach for Denison. She was previously the assistant coach at Macalester College in Minnesota for six seasons where she was a four-year starter and a second-team all-conference selection in 2001.

Graves is the sixth coach in Denison volleyball history and is taking over a program that has averaged 18 victories per season over the last three years.

The victory propelled Denison to 6-3 on the season while Marietta falls to 4-3. The next match will be this evening at 7 p.m. when the Big Red travel to Mount Vernon Nazarene.