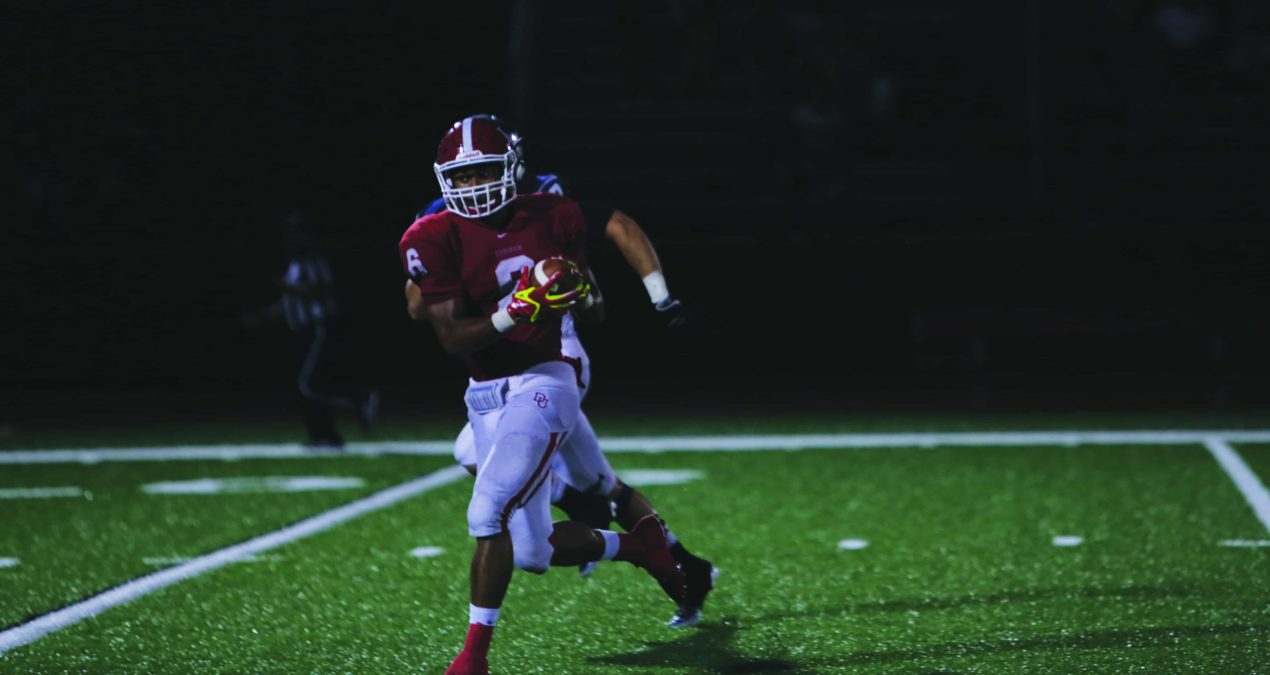 It was not a question of if, but a matter of when.

Head coach Jack Hatem was a guest on WDUB’s Big Red Sports Talk last week and shed some light onto what makes Brown so good.

“Oh, gosh, just a whole wide array of things,” Hatem said, “I think if you were just a casual observer, you would say that it’s his speed, but it’s just so much more than that. He’s just a game day playmaker. It seems like, if you throw the ball up in a crowd of people, Dushawn’s always the guy that comes down with the ball. And, boy, he’s a tough out in the open field. He doesn’t just fall down. So if we can get him the ball in space, he’s really pretty special.”

Tommy Iammarino ’17 and Canaan Gebele ’19 were tasked with getting the ball to Brown. Both players threw a pair of TD passes to Brown as Denison led 24-0 at halftime. Iammarino also added a one-yard touchdown run in the first quarter.

“I thought our team played great on both sides of the football,” Iammarino said.

He was especially excited to complete a pair of passes to his brother, Matt Iammarino ‘18. “It’s awesome I was able to get Matt the ball,” the Chagrin Falls, Ohio native said, “He battled through injuries last year and this year so I was happy for him to get his first college catches.”

Defensively, it was a team effort that kept a shutout intact and helped give the offense consistently great field position. Andrew Baird ’17 led Denison in tackles with seven, followed by Brice Winans ’18, who had six and also recovered a fumble. Zach Pewitt ’16 had four quarterback hurries at linebacker while Joel Lohoua ’17 broke up two passes and picked off another. “It was a great play from the entire defense,” Lohoua said.

“Starts off with the DL and LBs as always they did a great job on pressuring him which forced a bad throw. I just did my job but thanks to the guys up front the INT was possible.”

As a whole, the Big Red added eight tackles for a loss, including two sacks of Oberlin quarterback Lucas Poggiali.

Lucas Romick ’16, who came up big on defense, tallied five tackles, including two for a loss and forced a fumble. Romick was named to the Allstate® AFCA Good Works Team® earlier in the week.

The Big Red will be on the road for the first time this season as they travel to Wooster, Ohio, to take on the Fighting Scots in the battle for the Old Red Lantern this weekend.

Denison football has a wild couple of games