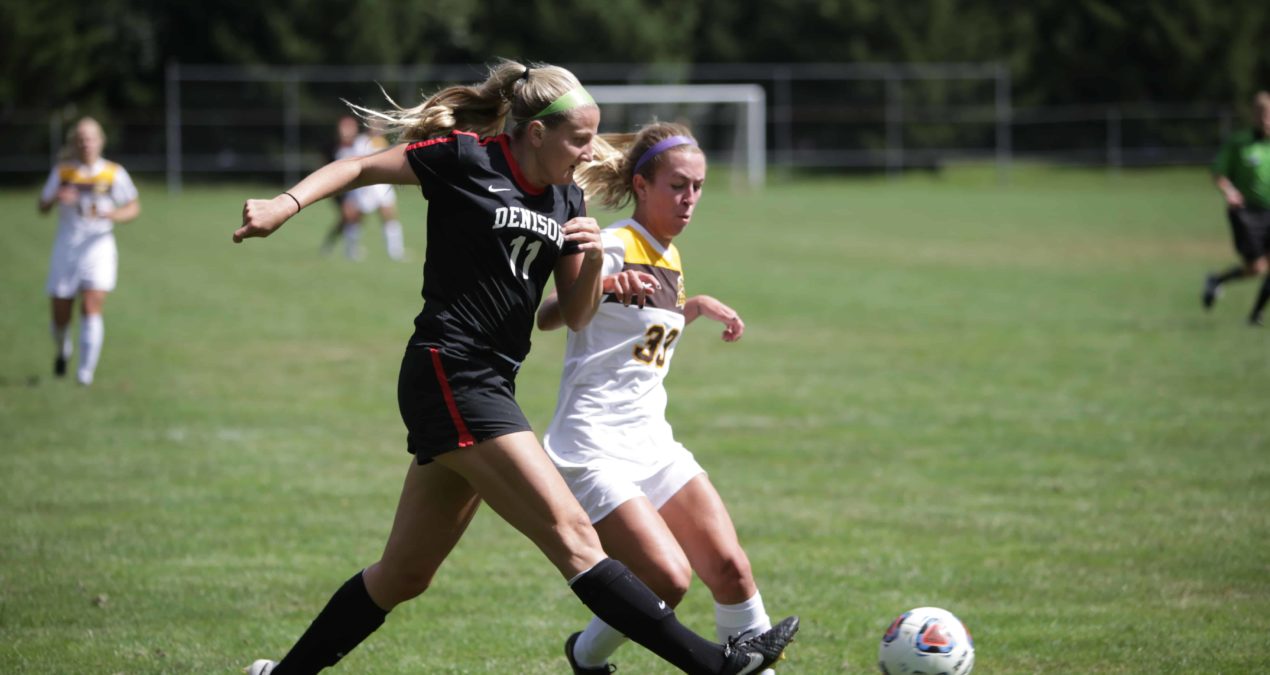 Since the first national rankings came out naming Denison as number 14 in the country, the Big Red did nothing but prove its prowess as a nationally ranked team, winning both away games this past week. On Wednesday, Sept. 16, the team traveled to Ada, Ohio to compete against Ohio Northern University. With goals by Maggie Armstrong ’19, Ashlyn Flaherty ’17 and Andrea Witte ’16, they beat the Polar Bears 4-1.

Flaherty, who is from Chagrin Falls, Ohio, described the lead-up to her goal during the first half of the game: “The ball was out wide then it was crossed back into the middle where a midfielder was fouled about 25 yards out. Captain Andrea Witte, Drew Wentzel and myself set up for a free kick play and I decided to take a shot on goal and hope to get it over the wall.”

The team’s chemistry continued to shine throughout the week. When they traveled to Danville, Ky. on Sept. 19 to play nationally ranked No. 10 Centre College, the Big Red left as underdogs and returned as victors, winning 2-0.

Sixteen minutes and eleven seconds into the first half, Meg Wozniak ’18 from Kenilworth, Ill. scored the first goal for the Big Red against Centre College. Ten seconds later, Armstrong, who is from Wilmette, Ill., scored the second and final goal of the game.

When expressing how the team has performed so well this season, Wozniak explained, “Our team chemistry is what has really propelled us this year. We have skilled players who want to work for each other.” This chemistry was quite evident in the underdog win over Centre as both the defense and offense had incredible performances.

“The game against Centre was an evenly matched, hard fought game,” Denison’s Head Coach Gail Murphy said. “Those are the types of games we love to play because it challenges us, stretches us and makes us better.” With an undefeated record of 7-0, Denison’s national ranking is sure to improve this week, especially after beating Centre, who was nationally ranked No. 10.

“It is so exciting to be undefeated,” Flaherty said, “and I think if we continue to work hard to defend in all thirds of the field and keep up the high pressure on the teams we face, we will continue to find success.

The women’s team fight to stay undefeated continues as they travel to Bexley, Ohio to play Capital at 7 p.m. Tuesday, Sept. 22.