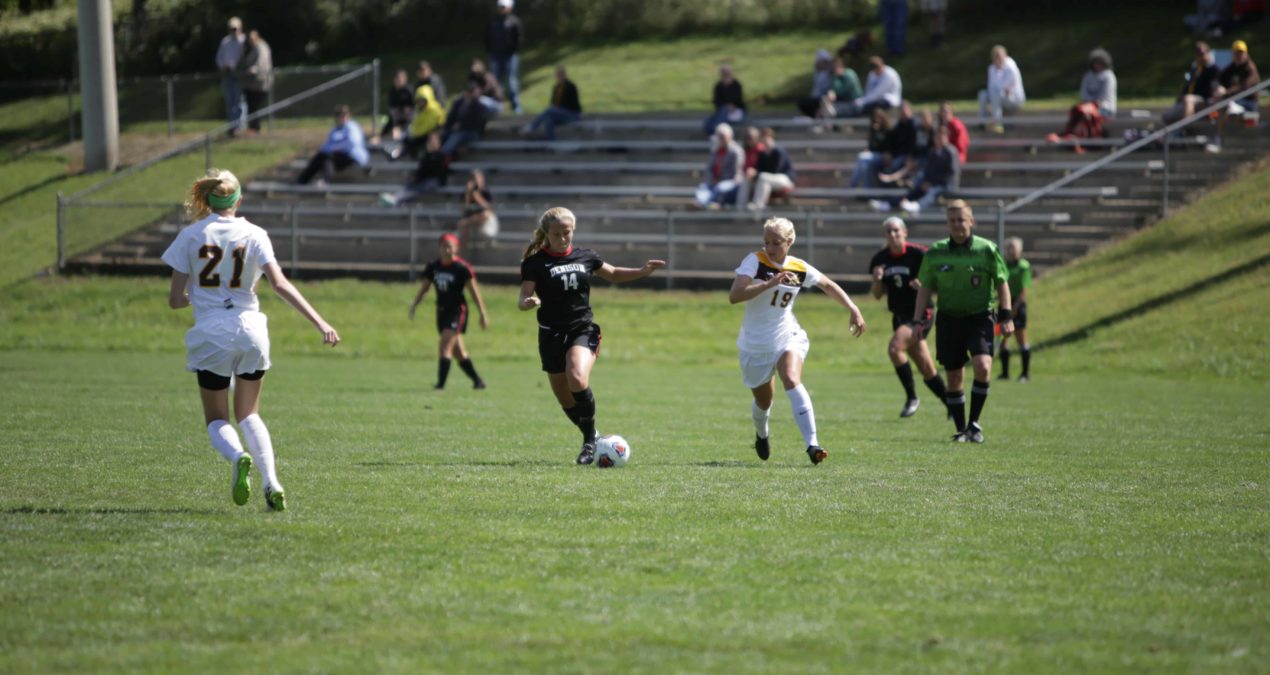 Jostling for the ball down the right side of the field, Maggie Armstrong ’19 managed to wrestle control into the box, send a perfectly placed cross into teammate Jacquie Graham ’17 who buried it in the upper right 90 to score the second and final goal of the game, sending the Big Red to 5-0 on the season. The 2-0 win also handed the speedy Baldwin Wallace their first loss of the season.

“I knew I didn’t have a good enough angle to try and shoot it,” said Armstrong, recalling the assist. “I looked up and saw Jacquie running into the box and I knew that if I tried to play her she’d be able to get on the end of I and put it away.”

Armstrong is having a great start to her freshman season; she has started every game and is currently tied for second on the team with two goals on the season. Individual success is not the only thing propelling Denison to this historic start. The Big Red women are displaying great team chemistry, proving it with both wins and quality team-orchestrated plays like the one between Armstrong and Graham.

“The team chemistry makes everything we’re doing worth it because through all the work everyone is putting in, we know that it’s for each other,” Armstrong said. “There isn’t a single person on the team not willing to do it.”

The fluidity of soccer forces players to go from defense to offense in a flash. Despite scoring the second goal, Graham admits that the defense sets up their high-powered offense.

“In order to win games, we have to all be on the same page defensively as well as offensively,” Graham said. “A big part of our training so far has been on team defending, which has ultimately lead to some of our best attacks.”

In order to be able to compete at the offensive and defensive end of the pitch, it is crucial for a team to be in great shape. Running for 90 minutes is no easy task, especially if the members had a leisurely summer break before the autumn season.

“The team came in really good shape which obviously helps,” Jessica Skelly ’17 said. “Preseason is a short period of time and so we knew we had to come into it ready to go.”

Skelly scored the first goal against Baldwin Wallace, just 17 minutes into the game. Now that the Big Red have started so strongly, they know it is imperative to keep their intensity at their highest level.

“We have to take the season one game at a time,” Graham said. “No team is going to roll over for us. Every game we’ve played so far has been against very skilled teams, and all of our games in the future will be just as tough.”

The next game will come against a gritty Ohio Northern team in Ada, Ohio this Wednesday at 4 p.m.