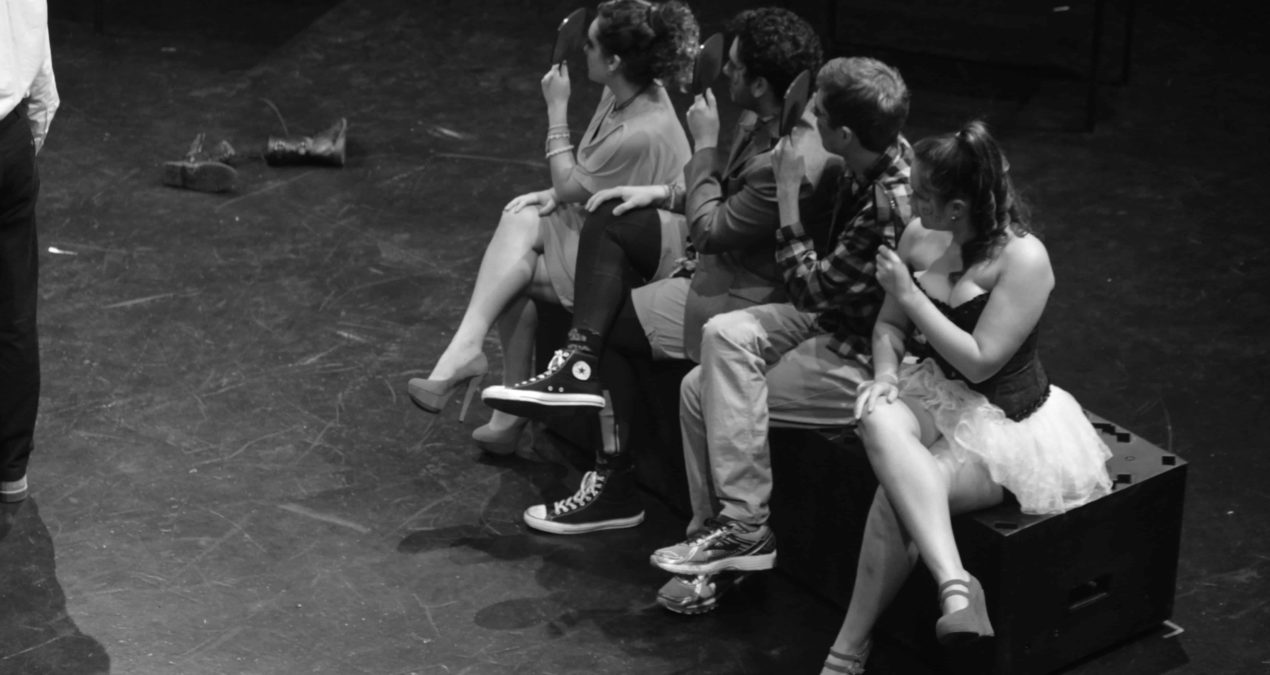 From video games to grave-digging, cannibalism and more, the DITA One Acts did not disappoint this year.

Seated next to me, Jillian Koval ‘16 noted how she was “excited to see what people have done with the material this year. DITA always does great stuff.” Koval’s beliefs were proven right from the very first act.

“Barbie Detective”, written by Maddy Bellman ‘18 and directed by Hunter Janness ‘17, tells the story of a bored high school student stuck at home because of the snow. The girl, portrayed by Imani Abernathy ‘16, decides to dive into her younger sister’s video games.

The remainder of the act follows Barbie, played by Francesca Mourey ‘19, as she seeks clues to hunt down a murderer. Ken, played by Nick Staniszewski ‘19, makes an appearance as well, ultimately being implied as the murderer.

The act proved that Mourey has the physical comedic style that rivals Lucille Ball, and we should all indulge in hilariously corny video games more often.

The following act featured Louis Weisz ‘19 as the writer and Marc Weaver ‘17 as the director.

“Choose Your Own Adventure”  featured protagonist Calvin, played by Frederico Read ‘19. He was taken on an adventure through a book where he was forced to interact and make decisions with his co-stars. Each decision and interaction he made led to a result.

The night continued with more risque topics including weed, murder and gravedigging. “Gravediggers, Murder and Marijuana,” written by Robert Templehof ‘18 and directed by Cole Stern ‘17, follows the stoned adventures of John and Sally, portrayed by Rohaan Unvala ‘17 and Taylor Nelson ‘17 respectively, as they followed a murderous man to a graveyard.

The man turns out to be a time-traveling murderer wanted by an intergalactic police force.

An abstract piece followed entitled “Kiss me I’m Awkward.” Written by Templehof  and directed by Meg Odell ‘19, the characters attend a night of dancing and dining at a general’s estate. Ryabovitch, played by Nick Salasky ‘17, gets kissed by a strange woman and gains the confidence he lacked, but still doesn’t know how significant the kiss was. In conclusion: Kissing is confusing.

w“Under the Table,” written by Allie Vugrincic ‘17 and directed by Kayla Boggess ‘18 starts with a date between a couple. Abby and Will, who were played by Zoe Deprez ‘18 and Weisz are finally enjoying a night to themselves until they are interrupted by several mutual friends. The two alternate hiding under the table to avoid awkward situations, leading to lies and a glass of wine thrown at Deprez.

The gist: lies are messy and so are wine stains.

Ryan is eating at the kitchen table when Greg comes in scavenging for food. Greg, in hungry frustration, grabs the soup from Ryan only to discover a human eyeball in the broth.

An uncomfortable conversation about Ryan’s cannibalism habits ensue. Ryan and Greg’s friendship overcomes the setback, proving that nothing can destroy friendship.

All in all: elementary school plays are adorably awkward, and Janyce Caraballo ‘17 will definitely be her character, Miss MacDougal, when she’s 30.

“Bananas Foster,” written by Lauren Thompson ‘18 and directed by Erin Katalinic ‘16, shows a couple on an obviously bad date. When it’s time for dessert, Jeff, played by Peter Malicky ‘18, requests the bananas foster. Though at this restaurant, the desserts are literal.

Jeff and his date Lauren, played by Amanda Tazioli ‘16, get suckered into fostering a banana. Lauren isn’t interested in motherhood, and opts to enjoy the banana as her dessert much to the dismay of her date. By and large: bananas are friends, not food.

The final act returns to the classroom. “The Accelerated Program” written by Katie Landoll ‘18 and directed by Meghan McGuire ‘17 starts with a group of four students taking an exam.

Their teacher looks ill after taking a sip of her coffee. Soon, she passes out on the table as a result of a prank pulled by Jay, Gabe Schenker ‘18. When their teacher doesn’t wake up, hilarity ensues as the 6th graders think they committed a murder.

Mourey perfectly summed up the night after curtain call when asked to comment: “It’s been a lot of laughs and a lot of fun.”