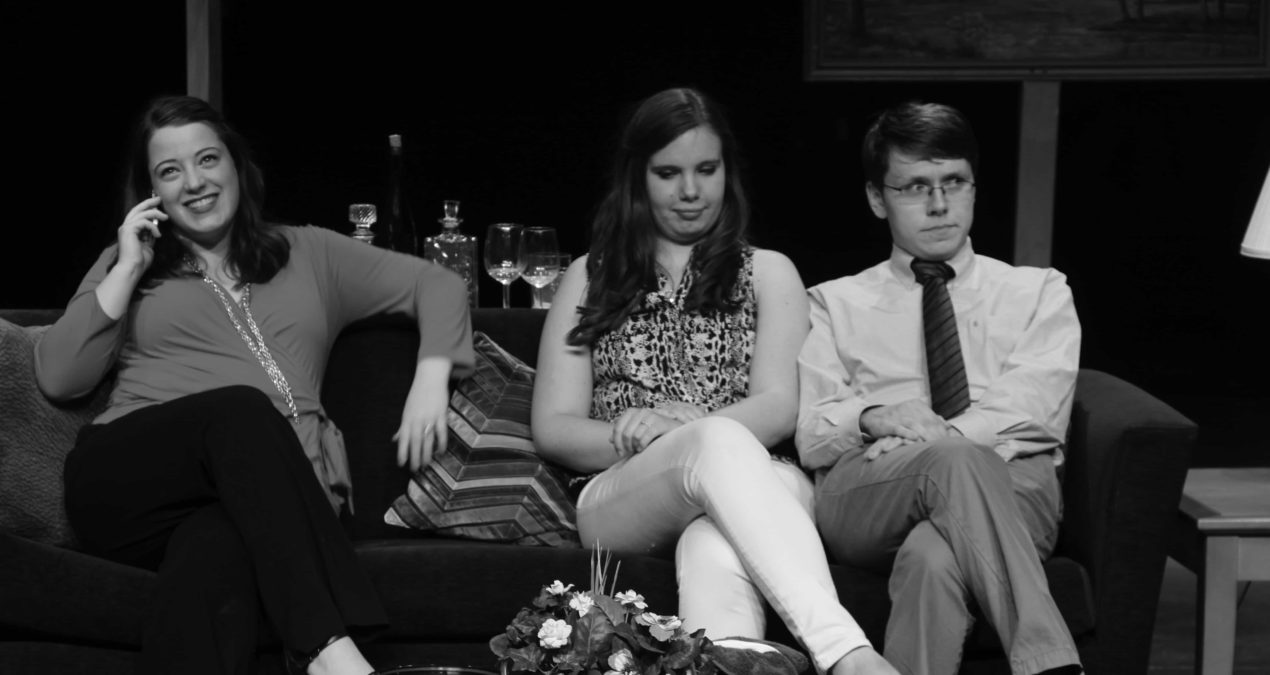 The culmination of senior Matthew Harmon’s  summer research began with a young housewife anxiously rearranging the living room. Harmon spent these past few months writing a play and the Denison Independent Theatre Association kindly brought his work to life. The Will was an exceptional piece of student written work, brought to life with Denison’s acting talent, and incredibly well-received by the audience.

Laughter echoed throughout the whole performance, and you could tell the audience was invested in the characters when they shouted at a moment of intense emotion. The performers truly grasped the emotions of the audience.
Something worth mentioning is also how very serious issues—teen pregnancy, divorce, affairs, etc.—were presented in such a relatable, comedic way.

Alice Boldin, portrayed by Aleksa Kaups ’16, is the first character presented to the audience. The patrons immediately get the idea she is preparing for company by the way she shuffles pillows, sets out a cheese tray, etc.

Soon after, Alice’s counterpart arrives on the scene, Charlie Boldin, depicted by Nick Radmer ’18. Upon first impression, you would expect them to be a family that attends weekly PTA meetings, actively recycles and owns a Golden Retriever named “Buddy,” essentially because of the wholesome and cohesive relationships the actors seemed to have built.

The arrival of Charlie informs the audience that the careful preparations are for the impending visit of his mother.

She has requested that the whole family gather to discuss something important, though she leaves out the specifics.

The impression of the first two characters made me a little worried that this would be a plain story about suburbia.

However, the dynamics brought out by the additional personalities did not disappoint.

Miranda is best described as the blunt, nosy aunt at family gatherings who is always equipped with a drink in hand.

Her companion Jeff Holt is the complete opposite. Cole Stern ’17 plays the role of the awkward, shy and obedient husband well. The two together form an unexpected pairing, which results in a hilarious dynamic .

The youngest of the Holdin siblings is played by Peter Malicky ’18.

With a relaxed attitude and tree hugging tendencies, Henry Holdin is the kind of guy you’d see showing up at the polls Nov. 11 solely to vote in favor of medical marijuana.

He is known as the slacker of the Holdin family, with only his wife to give him credibility. Though we soon learn that she has left him as well.

Once all the siblings are reunited in Charlie’s house, speculation about their mother’s visit arises.

Ultimately they come to the conclusion that she must be ill and needs to settle her affairs.

The remainder of the show displayed the outrageous lengths by the siblings to ensure a fair share of the estate.

During these crazy antics, the cookie-cutter illusion of Alice and Charlie was broken with the announcement of a pregnancy scare from teenage daughter Erica, portrayed by Maria Hollobaugh ’18.

Much like a Woody Allen film, each story started to mix with another.

Rohaan Unvala ’17 commented further, “I really liked how each character had their own little story going on. Each of those stories got slowly intertwined while they were all together in the living room.”

It is important to note that all of this occurred before the audience even got a look at mother Anne Boldin, played flawlessly by Kate Voigt ‘19.

The most spectacular aspect of the show was the absolutely impeccable timing of the actor’s exits and entrances.

Every time something shocking occurred, you could count on someone walking in, usually Miranda.

The accidental walk-ins only made the family dynamic more tangled and entertaining.

Being a DITA virgin before seeing The Will, I had no idea what to expect from a student-written performance. Needless to say, I was extremely impressed with the performers and Mr. Harmon’`s work. It was also great to see how a summer research project could truly come to life.

The Will truly displayed how much talent Denison has to offer.