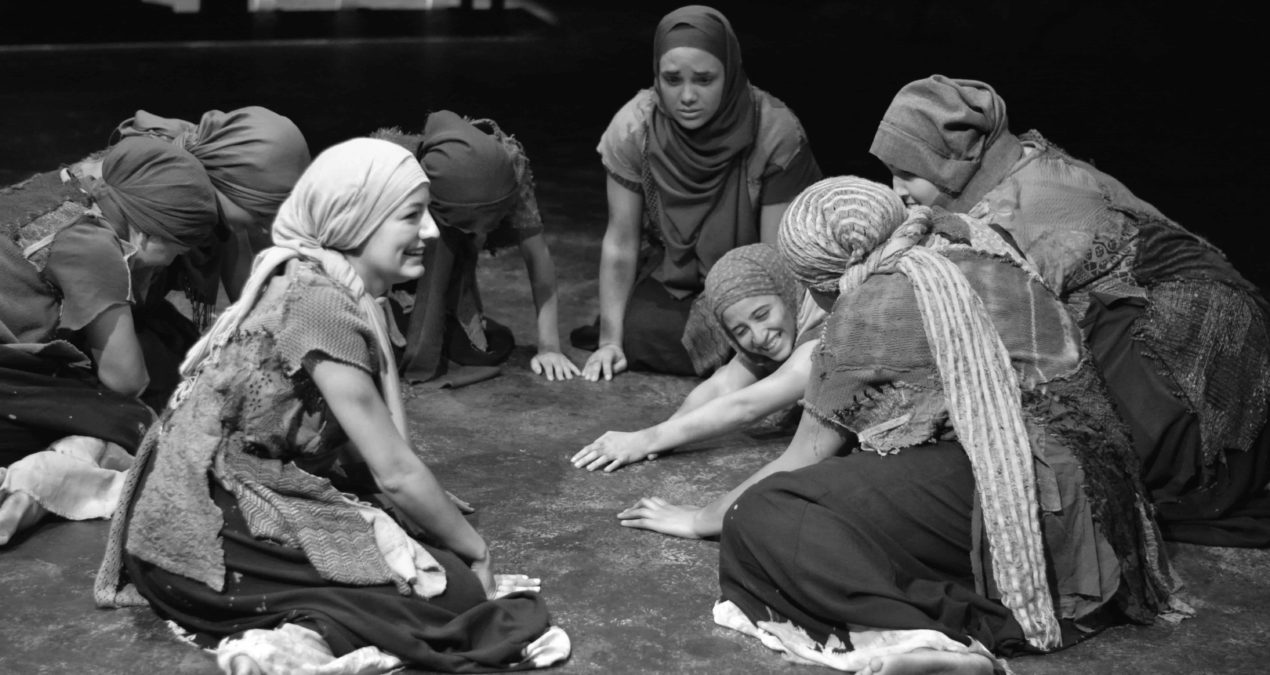 “To the ships!” two men in black uniforms and masks shouted, stamping their staffs on the ground in front of them.  “It is over!”  With that, the actors shifted scenes to a small viewing room where a short exposition introduced the historical events of Greek war tragedy prior to the  curtain rising on The Trojan Women.     The tension in their voices foreshadowed the dark, war-torn tone for the rest of the show.

The Trojan Women is the theatre department’s first faculty directed play this season and certainly set the stage for an impressive season ahead.

This set up effectively captured the attention of the audience and prepared them for the rest of the play, which was exciting and well-planned. Faculty director Cheryl McFarren said, “I began thinking about how we could make use of [the warriors] to change the audience’s experience of the play.

Traveling into the theatre space because the warriors force us to do that gives us a different experience.”

After the warriors urge the audience to take their seats, Aaron Robertson ‘16, an actor and sound designer for the play, enters the stage as Poseidon, wielding an odd instrument much like a lyre, but that makes a screeching sound when played, like sounds from a horror movie.

The girls awaken, taking turns saying, “I dreamed of a city,” where they were each mothers, daughters, craftswomen, etc.

The women realize, however, that it was a dream and that they are no longer any of those things.  The queen of Troy, Hecuba, played by Logan Creasman ’17, tries to keep the women together, but her own hurt seems to affect them also.

In the small black box theatre, it was easy to see the more subtle indications of character development.  For example, when Hecuba’s crazy daughter, Cassandra, played by Julie Hoagland-Sorensen ’16, screams and raves about being married off, a lot of the attention is on her, but the subtleties in Hecuba’s face reveal how horrified she is that it has come to this, that her crazy daughter must find comfort in being sold to a man and becoming his wife.

The challenges of working with this small theatre, which requires the actors to both connect with and separate themselves from the audience, was actually one of the reasons why it was so appealing to McFarren.

“It’s really exciting for performers to hold their concentration so close to the audience,” she said, “and for the audience to suspend their disbelief even though they can see each other as well as the actors.”

The play reached its climax when Hecuba’s daughter in-law, Andromache, played by Zoë Deprez ’18, was forced to give up her baby, the son of a prince, to be thrown from the balcony.

The setup of the Black Box theatre increased the drama of this event, as there was an actual balcony to drop the baby from.

McFarren had planned it all out and had requested the Black Box specifically for this purpose.

Deprez showed Andromache’s love and loyalty to her baby well, though she says this did not come to her immediately.  “I had to work intensely on getting into the emotional mind-set and realizing my duty within my social standing as a mother and as a Trojan woman,” she said.

With the death of the child, the women were heartbroken and soon after they were sent to the ships.  The women had no hope left, as evidenced by Hecuba’s final breakdown where the strength she once exhibited fails.

The power of the play reached the audience well.  Presenting the show in the Black Box theatre definitely contributed to the strength of the audience’s connection to the actors because of the 360 degree view of the action and emotion.

This was clear when  Cole Stern ’17 remarked that the play was “more about emotion than narrative.”  Alex Woroncow ’16 said that it was “extraordinarily raw and very different from most contemporary theatre.”

The play was a success, as the audience came away with an understanding of the horrors of the aftermath of the Trojan War and felt the deep pain the Trojan Women endured in becoming slaves to their husbands’ murderers.