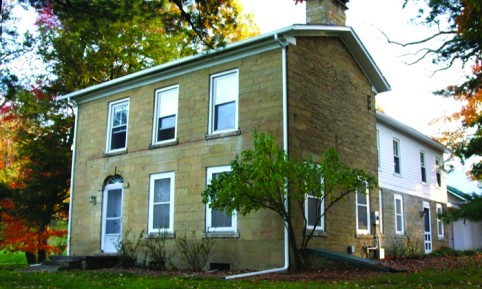 Built in 1834, the Bancroft House at 555 North Pearl Street hides a wealth of history behind its rough ashlar façade. The house is named for its erector and first owner Ashley Azariah Bancroft. Bancroft was described as an “ardent abolitionist” by the Granville Historical Society in their “Historic Homes of Granville, Ohio,” a document compiled for the township’s Bicentennial in 2005.

Ashley A. Bancroft was a descendent of the founder of Granville, Mass., Samuel Bancroft who founded the East Coast town in 1754. The scintillating history behind the home on Pearl Street began in 1836 just two years after its construction when Ashley Bancroft used the barn on the property (which no longer stands) to host the first meeting of the Ohio Anti-Slavery Society. According to the Historic Homes of Granville, Ohio pamphlet, “The Great Riot of 1836 resulted from the convention’s dismissal.” There were many citizens of Granville who voiced their vehement dissent to the meetings and the society itself. They threatened the members of the Anti-Slavery Society and Ashley A. Bancroft’s nephew, Hubert Howe Bancroft, used the town hay wagon to drive north of town, hiding people beneath the bales as part of the underground railroad.

H. H. Bancroft grew up to become a famous historian, notable for being the man after which the grand Bancroft Library on University of California, Berkeley campus is named after. The Bancroft House was one of many homes on North Pearl Street that aided and abetted runaway slaves as part of the Underground Railroad. “Historic Homes of Granville, Ohio,” describes the The Samuel and Charles Langdon House at 235 North Pearl Street as “a well-documented station on the Underground Railroad; on one occasion, a fugitive slave hid there for two weeks.”

Because of their location well outside of the town center, the houses on North Pearl Street were prime thoroughfares for the unlawful movement of runaway slaves as they made their way north to Mt. Vernon. Ashley Azariah Bancroft was a pioneer of his time for all of the devotion he showed toward a dangerously unpopular movement in the mid 1800s. The historic home was not only privy to the owner’s activities, but was the site of many of the important goings on that facilitated the success of the Ohio Anti-Slavery Society in Granville and in Central Ohio as a whole.

After its remarkable duties in the 1800s, the house was purchased by Denison University in 1917. For eighty years, the house was used as a faculty residence until in 1997, when it was converted into a student residence. According to the University website, the home is designated “as the only ‘satellite’ house designated solely for women, Bancroft offers its residents a setting that’s both unique in Denison living and cradled in history.”

Kirstie Rodden ’16, a cinema and theater major, could neither confirm nor deny rumors that there is a tunnel beneath the house, though she did state that she has never seen it. Rodden is one of the six female students who live in the house today in the 2015-2016 academic year. She and her friends described the rather simple process of attaining their unique residence: “We just applied through the regular, special housing lottery,” she said. “The only clause was that we had to get a group of six girls together in order to apply. Little did everyone know that we Denisonians are living among houses that once sheltered runaway slaves and united members of Granville against the horrid laws of the enslaved peoples.”

The Bancroft house, unique in every way from its illustrious history to its modern application continues to stand on the same small plot at the edge of Denison’s campus today.