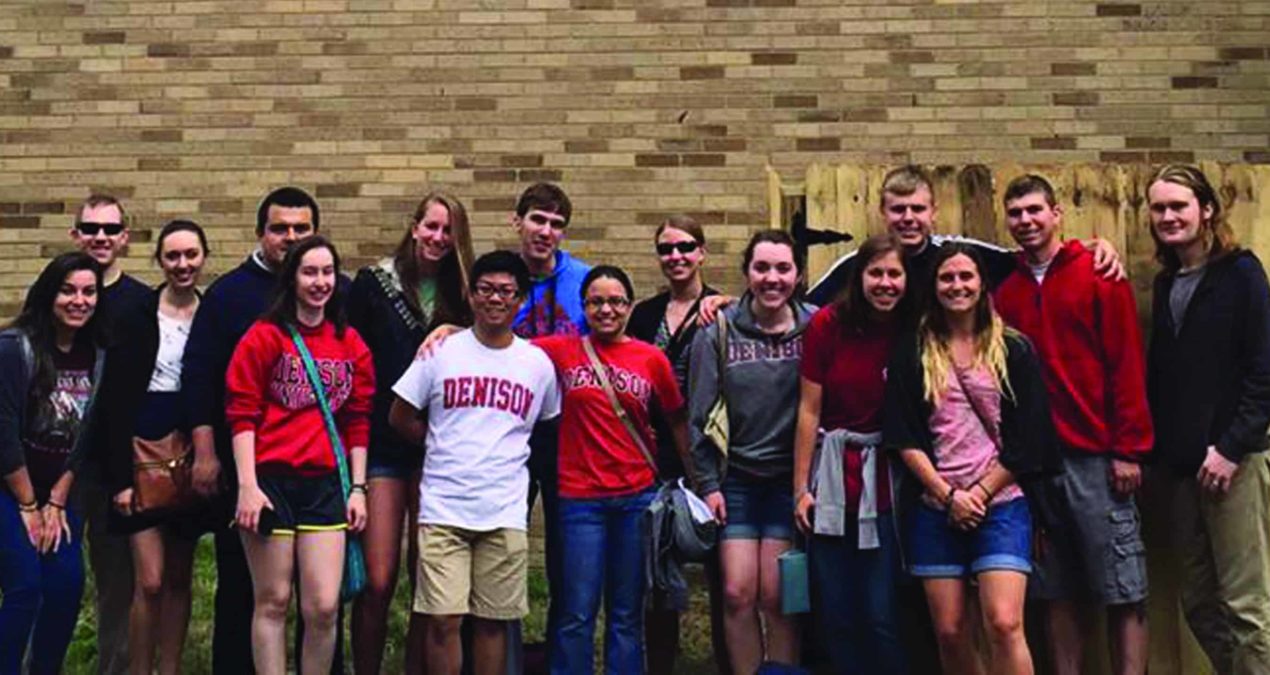 A bird’s eye view of Philadelphia’s Benjamin Franklin Parkway on Saturday, Sept. 26 looks like a mile-long, multicolored gathering. All heads were turned toward a figure clad in all white, and despite the frenzy of the crowd, a feeling of spirituality seemed to unify everyone present.

Pope Francis, the 266th pope of the Catholic Church, made an historic visit to the United States on Sept. 22 to Sept. 27. He addressed the United States Congress on the morning of Sept. 24., a meeting which factored into Speaker John Boehner’s decision to retire from office at the end of the month. Boehner invited the pope to visit the U.S. over a year ago.

Denisonians past and present witnessed Pope Francis’ visit throughout various legs of his journey. A Denison alum, Roberta Chapman, was an usher at his visit to Congress, and a large group of Denisonians went to see him speak in Philadelphia on Sept. 26-27.

A group of 13 students from the Newman Catholic Club went to his speech at the Festival of Families and also attended his Sunday mass. Hannah Fiore ‘16, a psychology major from Cleveland and president of the club, credited Paul Radkowski of the Church of St. Edward the Confessor in Granville for putting the trip together.

“He was a rock star and called around and found us lodging and parking and tickets and all that stuff,” she said.

She added, “There was one point in the mass where the choir had stopped for some reason everyone else kept singing acappella. It was a very simple, beautiful moment of all these people of different races and classes coming together.”

Gemma Aldana ‘17, an educational studies major from Westlake, Ohio, said that navigating the streets during the event was stressful, but seeing the pope made it worthwhile.

“We were stressed because we were trying to walk back from Philly and everything was blocked off, and then suddenly he was going back,” she said. “It was kind of scary because the Pope Mobile doesn’t have windows on the sides, so the thought of how close he was and open–someone could have shot him.”

Kristóf Oltvai ‘15 drove from Pittsburgh with two of the Christian brothers who work with him at Central Catholic High School. Oltvai attended the World Meeting of Families Concert on Sept. 26 and his Sunday mass.

At the mass, “He spoke about the importance of the family and how the family is kind of like the nucleus of the church and how the little gestures of love that we demonstrate in our homes are the signs of God’s presence in the world, in the most concrete sense,” Oltvai said.

Pope Francis’ visit was clouded in controversy in the days following his departure, as he had met with Kentucky county clerk Kim Davis, who has refused to issue gay marriage licenses. “What surprised me about his meeting with Davis is that it is more political of an act than I thought he was going to do on his visit,” Oltvai said. “That being said, I think the fact that the Vatican has made it clear that this is not a blanket affirmation of what she is doing speaks to the nuances of the situation.”

Even though some in attendance might possess different views than the Catholic Church, Pope Francis’ talent for relating to a more contemporary audience drew out hundreds of thousands of different race, class and sexual orientation.

Oltvai said, “Our host in Philadelphia, Brother Richard, spent the entire mass standing next to a gay couple, one of whom was Catholic and the other whom was Jewish. He said he really enjoyed speaking with them and learning more about their life, and I think that speaks to the uniqueness of Pope Francis, that two people who might not agree with the church’s teachings would go anyways. I think that is very powerful and speaks a lot about him.”