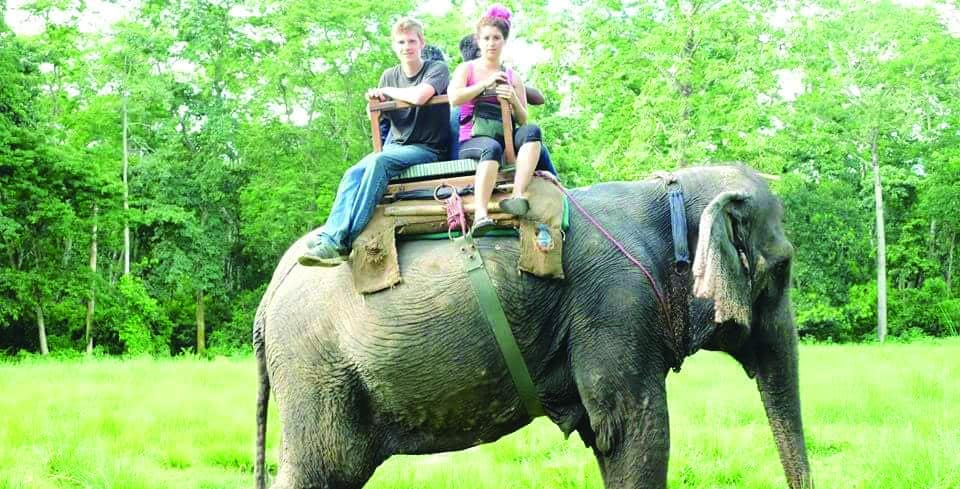 After nearly five months of meticulously planning his summer research project, Zachary Schmidt ‘18 was all set to head to Nepal for a three week stay in order to explore the health care disparities that exist in the landlocked nation. These plans were nearly wiped away on April 25, 2015. On that fateful day in April, a 7.8 magnitude earthquake rattled the mountainous nation of Nepal leaving nearly eight thousand people dead and throwing a Denison student’s summer research plans into chaos. Schmidt poses with an elephant.

When Schmidt received approval for the project, he began  planning his stay in Nepal.  Shortly after, the earthquake struck. “(The April earthquake) had me, my family and the professor that was working with me worried about the future prospects of the project. At the time the United States was not letting people travel to Nepal without any just reasons and it looked like I might have to find something else to do” said Schmidt.

Schmidt’s nervousness over his project ‘s possible demise did not subside easily as Nepal endured aftershocks well into mid-May. Eventually, Schmidt was able to make contact with the family he planned to stay with.

“As time went on, they said that their home was fine. The area that they live in was somewhat affected but it was still very doable to make the trip there. Once I got reassurance from them I just went forward and I’m glad I did” said Schmidt.

Schmidt travelled alone to Nepal and when he finally was able to conduct his fieldwork in relation to the project he found some startling conclusions in regards to how the earthquake had affected healthcare disparities.

“The earthquake specifically affected medical disparities. While the physical damage was important, a lot of the impact came from the physiological and emotional damage of an earthquake because it deterred people from getting healthcare” said Schmidt. Schmidt quickly became aware of the healthcare disparities in Nepal.

He expanded on his statement by explaining how, “People in rural Nepal who tended to have the worst opportunities often were obligated to go to the big cities for medical treatment because this was where the hospitals were located.  They usually relied on getting to the city; however, after the earthquake, people thought the city was a lot more dangerous and people were afraid to go there” said Schmidt.

Schmidt’s work in Nepal has drawn his praise from other Denison students. “Zach Schmidt has a heart of gold.” Said Benjamin Worthman ‘16. “Along with the kind of moral character rarely seen in today’s society.”

Schmidt stayed in the capital city of Kathmandu for two of the three weeks during his stay. During his time in the capital, he was able to go to a local health clinic and meet with and question a public health expert. The remaining time that Schmidt spent in Nepal was in a rural section of the country where he was based on a farm. While in the countryside of Nepal, he was able to attend a local health clinic.

“I saw both sides of the disparity in Nepal by looking at the urban side which had a lot more resources and the rural side which was much more limited. Our focus in medicine in general is finding the cures to everything but the problem is that every advancement is not affecting everybody equally” said Schmidt.