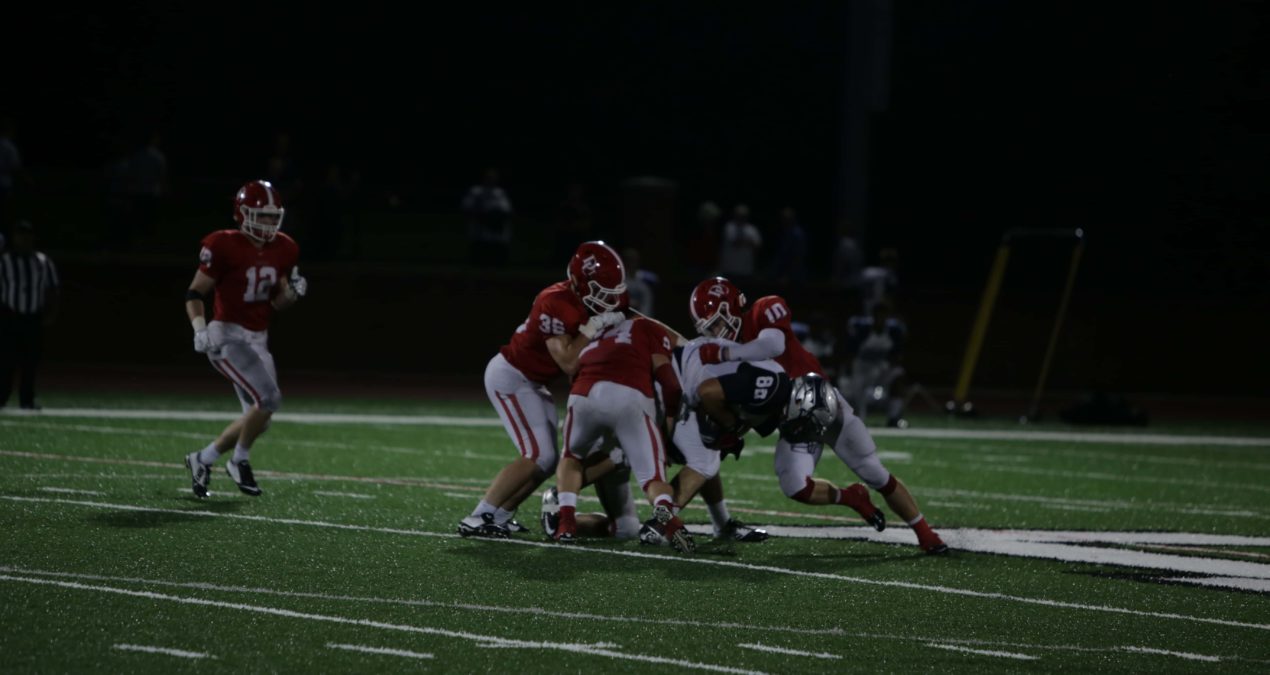 Their win streak is now at eight games, dating back to last season.

The first win, over Wooster, was not close. After a slow start, Denison exploded for 21 points in the third quarter and did not look back, winning 31-17.

Against Wooster, momentum shifted when Alex Mackin ’17 forced a fumble on the half’s opening kickoff, which was recovered by Ashton Millet ’18 and gave Denison great field position; the Big Red would tie the game on that possession and they did not look back. In the win, the DU outgained the Fighting Scots 422-108 in total offense. Wooster looked helpless offensively throughout, aside from a garbage time touchdown.

After scoring 127 points in the first three games, the offense could only muster 10. But the Big Red defense held OWU to just three points until the final minute of action, when Dominick Orsini completed a touchdown pass to Adrian Bishop to pull the Battling Bishops to within a point.

On the extra point, the snap sailed over the head of the holder, and a last ditch effort from the kicker failed. The ensuing onside kick was recovered by Ryan Roberts ’18, and the Big Red kneeled to earn a victory that was anything but pretty.

Ohio Wesleyan’s defense could not force a turnover, but the Battling Bishops sent extra rushers for quarterback Tommy Iammarino ’17, sacking him five times and leaving him with -18 rushing yards. “They were bringing different blitz packages and sending an extra man, which can be difficult to pick up in the run scheme and was hard for us to handle when passing,” right tackle Drew Gray ’17 had to say about the constant pressure.

The extra man could not force Iammarino’s hand too much, however, as he threw for 198 yards, a touchdown and no interceptions while playing the entire game under center. It was not Iammarino’s best outing, but he did enough to earn the W.

Jordan Patterson ’16 led the ground attack for Denison with exactly 100 yards. It marks the first 100-yard game of Patterson’s career and the first by a DU running back since Colin Morris ’15 in week one of the 2014 season.

“Going into the season, I thought I would be getting more reps at slot receiver, so a 100-yard rushing game from the tailback position is definitely a meaningful achievement,” Patterson said. Dushawn Brown ’16 paced the Big Red with 91 receiving yards, but that total broke a streak of seven consecutive games with triple-digit receiving totals. This season, Brown is averaging six catches for 119.3 yards per game.

Denison’s defense was a consistent nuisance for Orsini and company, forcing three fumbles and breaking up eight passes. Zach Pewitt ’16 led Denison with 14 tackles, followed by Anthony Sernus ’17, who had 13 stops. “To be honest, it didn’t seem like I had that many tackles,” Sernus said, “I guess it was just good team defense. Guys doing their individual jobs and trusting the other 10 guys on defense to do their job.” Andrew Baird ’17 added 11 tackles, including the 200th of his career while defensive end Zach Neufeld ’17 logged a career-high eight tackles.

Regarding his milestone, Baird said, “I have been fortunate enough to be healthy over the past 2.5 years, and to play in a defensive system that allows for safeties to be aggressive. Regardless of achieving 200 career tackles, the most important thing was the outcome of the game. Beating OWU never gets old.”

The Big Red are 4-0 for the first time since 1985 and look to extend their winning streak to nine games this weekend when Hiram College travels to Granville. Hiram upset Denison last season, and DU is ready to avenge the loss and neuter the Terriers. Kickoff is scheduled for 7 p.m. at Deeds Field-Piper Stadium.