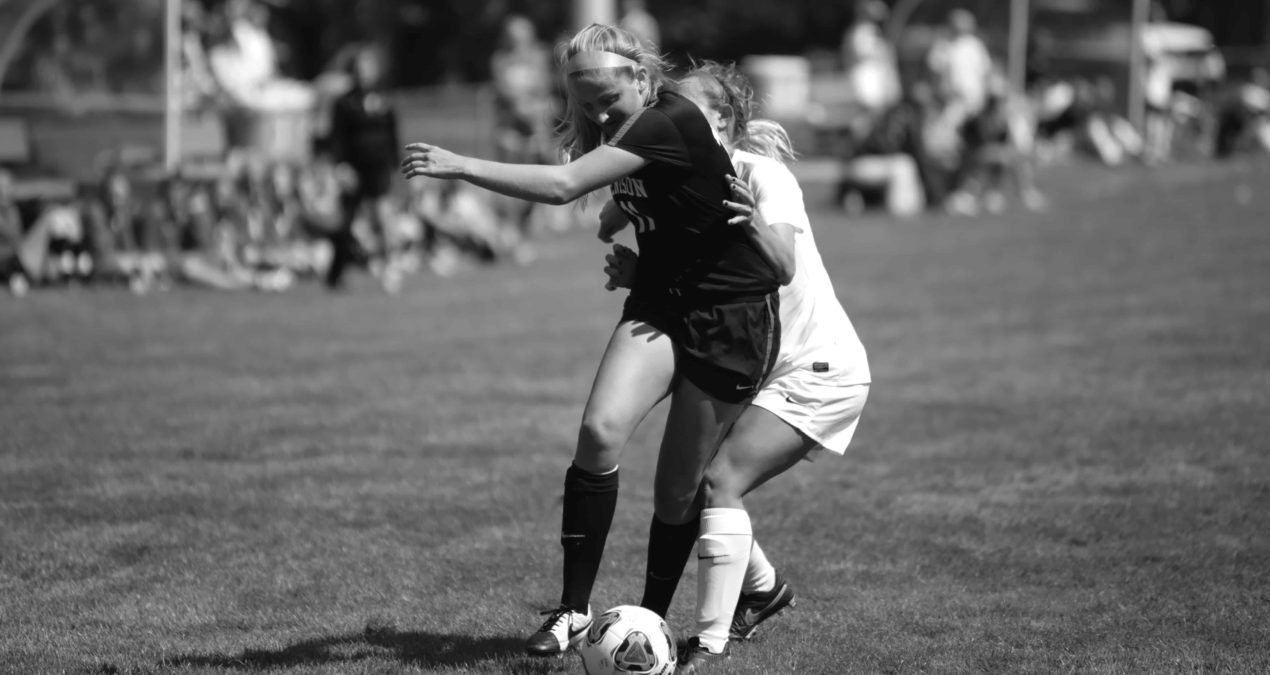 The eighth ranked Denison women’s soccer team defeated two conference opponents at Barclay-Thomsen field over the past two weekends to move to an unprecedented record of 10-0. Their 9th victory came with a 5-0 shutout against Ohio Wesleyan and continued with their 10th this past weekend in a 6-2 victory over Hiram. These two victories were their first two in the NCAC, moving their conference play record to 2-0.

The women faced Ohio Wesleyan on Sept. 26 in front of a packed home crowd for Big Red Weekend, and it did not take long for the women to open up scoring.

The game started with an early breakaway in OWU’s favor, but was stifled by an aggressive play from goalkeeper Jenny Harold ’18.

In the 10th minute, Meg Wozniak ’18 faced a breakaway situation in which she finessed the ball around the goaltender, easily dumping it into an open net.

The women went on to score two more goals in the first half. The second goal came in the 13th minute when Maggie Armstrong ’19 recovered a rebound and passed it to Anne Denz ’17 who buried it. Ashlyn Flaherty ’17 then made it 3-0 in the 28th minute when she danced around three defenders and rifled the ball into the bottom left corner.

Throughout the first half, the Big Red put on an incredible offensive show. The vast majority was spent applying pressure in the offensive zone.

In the second half, the women extended their lead to 5-0 with a goal from Jacquie Graham ’17 and a second goal from Wozniak.

Goaltender Herold provided some insight into her success in goal and the women’s success as a team.

“Seeing my teammates in front of me put in so much effort and do their absolute best makes makes me want to play at my best also,” she said.

“The trust that we have with one another… gives me the confidence to play well.”

The squad continued their stellar season with a 6-2 victory over conference opponent Hiram College.

Scoring started in the 8th minute when Armstrong drew a foul inside of the box, which resulted in a penalty shot goal by Flaherty. The score was quickly tied when Kaitlyn Zemanski of Hiram scored an equalizer in the 13th minute.

Six minutes later, Logan Berlet ’16 ripped a long shot that slipped into the top left corner of the goal, making it 2-1.

Denz and Flaherty added two more goals to close out the first half, increasing the lead to 4-1. Denz received a pass from Wozniak, which she lightly dropped over the goaltender. Flaherty closed out the half with a boot into the upper left corner.

The women quickly made the game 6-1 when they scored two goals within 87 seconds, compliments of Denz and Graham. This pair of goals ended Denison’s scoring for the afternoon, but they held tight for the rest of the game.

The Terriers gained another goal from Allie Glatt, but eventually came up short with a final score of 6-2 in favor of the Big Red.

After the two games, coach Gail Murphy gave some insight into the team’s play.

“Until we play the perfect game there are areas for improvement,” she said..  “Playing the perfect game is probably next to impossible, but that’s what we need to keep reaching for so we can stay focused, working hard, and hungry to compete.”

She also had many positive remarks about the team’s chemistry. “They care about each other as people first, and they understand that the number of minutes you play does not define who you are as a person,” she said. The last thing she spoke about the team was their dynamic-

“Laughter. There’s lots and lots of laughter. They have a lot of fun together.”

The women look to keep their streak alive when they travel to Case Western today.

Denison does not have a problem with Title IX, the system does