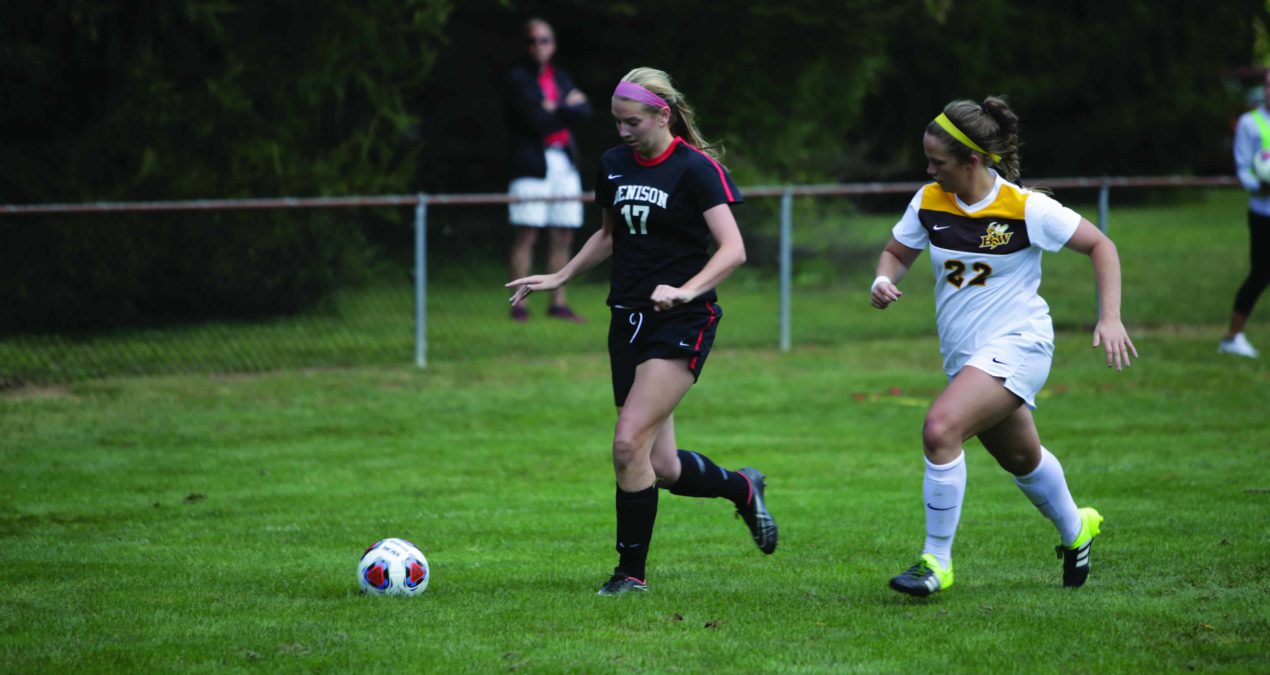 After suffering their first defeat of the season in an overtime loss to Case Western, the Big Red Women responded with a 1-0 overtime victory over Allegheny. Anne Denz ’17 scored the winning goal in the 101st minute off of a pass from Jacquie Graham ’17.

“I saw the ball rolling out to me at the top of the box,” Denz said. “There were two things going through my head, keep you body over the ball and do not blast it over the goal.”

The Big Red outshot Allegheny 18 to 10, forcing Allegheny goalkeeper Christina Gallagher to save 13 shots before the final one hit the back of the net. The win was a good way to move the team past what happened against Case Western the Wednesday before.

“We could have easily let it kill our confidence and shut down for the next few games, but instead people showed up to the next practice ready to go,” Denz said.

“We watched our film of that game at the next practice and realized that we played really well. The main issue we had in that game was how we played with the ball in the air.”

On defense, the team has struggled with a string of injuries, which has forced coach Gail Murphy to make some adjustments to the lineup. Even with the injuries, goalkeeper Jenny Harold ‘18 still believes the team is strong as ever.

“Defensively we strive for a shutout every game, simple as that.” Harold’s stalwart defensive line has been crucial in their wins. Harold rarely experiences shots on goal, and possesses a 0.57 GAA average.

As far as their offense, the team is looking to score more often so they do not have to be in tense overtime victories or defeats. Denz believes the team will continue to work at capitalizing on what they do best.

“We have not been getting behind defensive lines with our passes and that has limited our scoring options,” Denz said. “For future games all we need to do is focus on keeping the ball at our feet and playing wide. These are our strengths and we need to take advantage of them.”

The Big Red women remain undefeated in conference play with the win over Allegheny, moving their record to 11-1.

They will finish out the season with five conference games, including a match against the defending NCAC champions Wittenberg. The Big Red head home after their two-game road trip to play a Wooster team who is also unbeaten in conference play. The game is scheduled for this evening  at 7:00 p.m. on Barclay-Thompson Field.