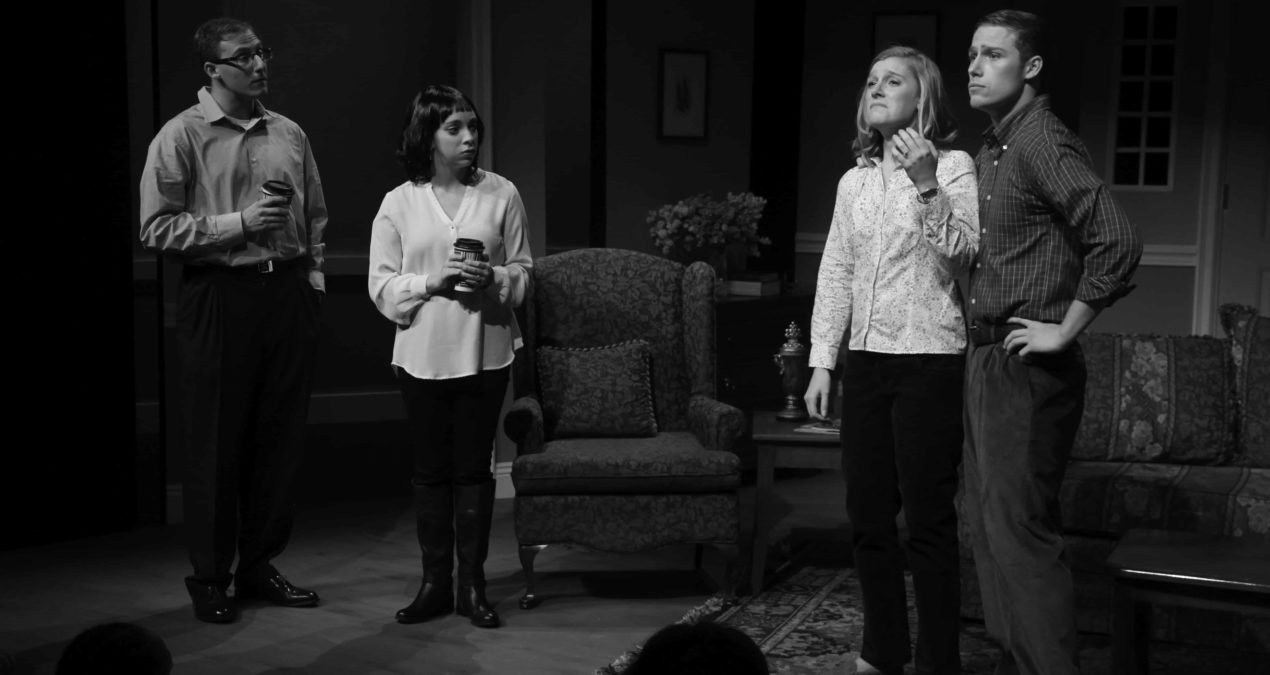 In the darkness of the theater, sudden, uncontrollable laughter erupted on stage. The lights went up, revealing two couples, the Martins and the Porters, who had just finished a meal together, sharing a hearty laugh, apparently in response to a story the Porters had just told.

The Best of Friends opened on Friday, Nov. 6, drawing a decent crowd. The play was advertised as a dark comedy, as the Martins and Porters, on the verge of becoming best friends begin to engage in a sort of “guerilla warfare” as its flyer described it.

As anticipated, there was a sort of tension underlying the laughter, especially as the friends exchanged forced pleasantries and made their way off of the set.

Then, something peculiar occurred – the two couples turned to the audience and began to explain the situation.

The breaking of the “fourth wall” was one of the most intriguing parts of the play, as the audience received insight into the minds of the characters.

Noor Qadri ’19 agreed, “my favorite scene was the part where [the] characters would step out of their roles and tell the audience the story about what they were actually thinking.”

Many times, the scenes would have —– of different subplots that interconnected, making the play even more enjoyable with all the twists that took place.

For instance, when it appeared that Ken Porter, played by Davis Cameron ’18, had cooked the Martins’ dog and served it to the Martins, it was exciting to find out that, in fact, Ken was unable to go through with it.

Turns out, the Porters’ dog was not missing anymore and they were just playing with Porters’ guilt. From knowing this, and then watching it play out in the next scene, the tension escalated, as the audience knew more than the characters did when they were experiencing it.

Despite the fun involved from seeing the drama play out between the two couples, there were a couple of false starts.

One scene was particularly confusing when it appeared that Ken had apologized to John for stealing his keys, but in the next scene, the Martins had apparently not confronted Ken about the matter.

Additionally, a few of the sound effects were puzzling, specifically with the dramatization of the words “barbecue dog” and other odd things. The stage lights would turn blue, the words drawn out and distorted. The reasoning behind it was confusing and a couple of audience members turned up their palms and shrugged, unsure of what was happening.

The play was a great time, full of hearty laughs, but there was an additional element that made it something worth contemplating. There seemed to be an underlying meaning commenting on the fragility of friendships today.

“I think that the play did have a deeper meaning about our relationship[s]. We can’t expect to know other people when we don’t know ourselves,” Qadri said, reflecting back on something the characters had said nearing the end of the play.

Overall, the play was fun and entertaining. Elizabeth Underwood ’19 played Beth Martin flawlessly, turning a snobby character into someone that we could laugh at without being too repulsed by her behavior.

Similarly, Kate Ramsdell ’16 and Cameron  worked well together as the Porter couple, creating a believable relationship and playing up all their quirks, specifically Ken’s cluelessness at some of Hannah’s comments to the Martins. Schenker’s character was equally hilarious and fun to watch.

The play ended with Hannah and Ken Porter smiling cheekily, indicating that the cycle of friendship evolving into hatred would continue.

But who would object to that? The play was enjoyable enough to watch over and over again–let the guerilla warfare of The Best of Friends go on.

A night of self-care with Denison’s First Generation Network