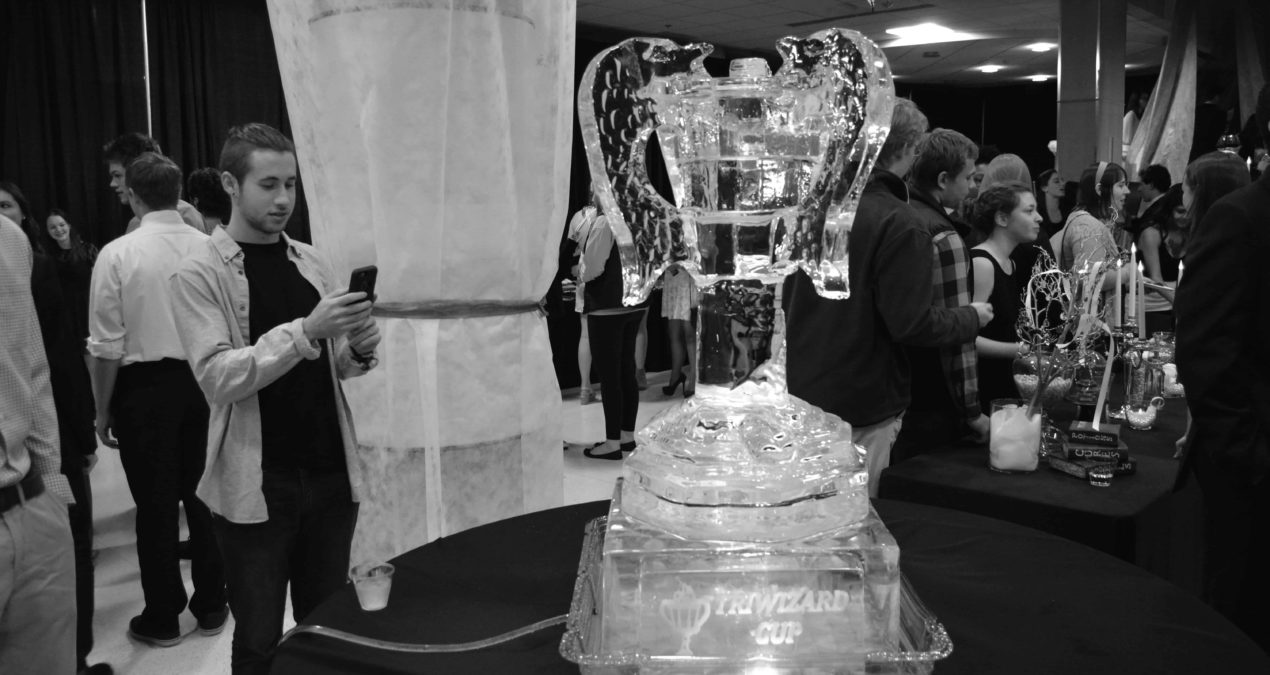 For anyone who loves dancing, eating and dressing up for formal events, the Gala Yule Ball was the right place to be. The 2015 Harry Potter themed Gala was held in Slayter, but you didn’t have to be a Harry Potter fan to have a good time. As soon as you walked in you could hear the Harry Potter theme song, “Hedwig’s Theme,” playing in the background.

“The theme was actually drawn from suggestions made at the end last year’s semester by the members of UPC,” said Emily Printz ‘16, a UPC member.

The dim lighting and whimsical decor helped set the mood. It was a semi-formal event where students had the opportunity to dress in fancy attire. The University Programming Council (UPC) was in charge of putting together this event, and DCGA allocated $8,450 in the budget for it.

One of the many pluses of the event was thatit was at no charge to the students, which included the several trays of food that drew many guests in. The hor d’ouevres ranged from shrimp with cocktail sauce, freshly cut fruits and vegetables, cheese, and crackers; the options were endless.

On the second floor of Slayter, there was an unlimited amount of chocolate ranging from chocolate frogs, tarts, cookies, and many others. For those who don’t like chocolate, there were also red velvet cupcakes and carrot cake with cream cheese frosting.

There were even small treat bags to take some chocolate on your way out. There was also a beautiful two-foot tall ice sculpture standing on the table of the Triwizard Cup awarded to the winners of the Triwizard Tournament in the Harry Potter series.

As if the food wasn’t enough, the dance floor on the third floor of Slayter was filled with good music and enthusiastic students ready to dance all night long. For the most part, only pop music was played. The band performed songs like “Happy” by Pharrell, “Low” by Flo Rida, and “Bad Blood” by Taylor Swift, among others. You didn’t even have to know how to dance to get moving to the beat of these songs.

Vanessa Cerda ’18, a biology major from Dallas, Texas said, “The Gala this year made me feel as if I attended Hogwarts and not Denison. It was definitely a magical night with amazing friends.”

Erin Worden ‘17, an International Studies and English double major from Pittsburgh, added, “Gala manages to gather Denison students for a classy, laid-back and inclusive night when we can momentarily forget about the impending stress of finals. It’s a chance to enjoy being together on the Hill. Plus, where else can you find an endless supply of free chocolate?”

“I was really impressed with the decorations and designs and how elaborate they were,” Jenna Mayzouni ‘19 from Chicago said. I was also impressed by the fact that they even stuck with the theme with the food too! Overall I had a good night and it was a lovely experience to dress up and have fun with people I cared about.”

Fringe Festival closes out a year of theater