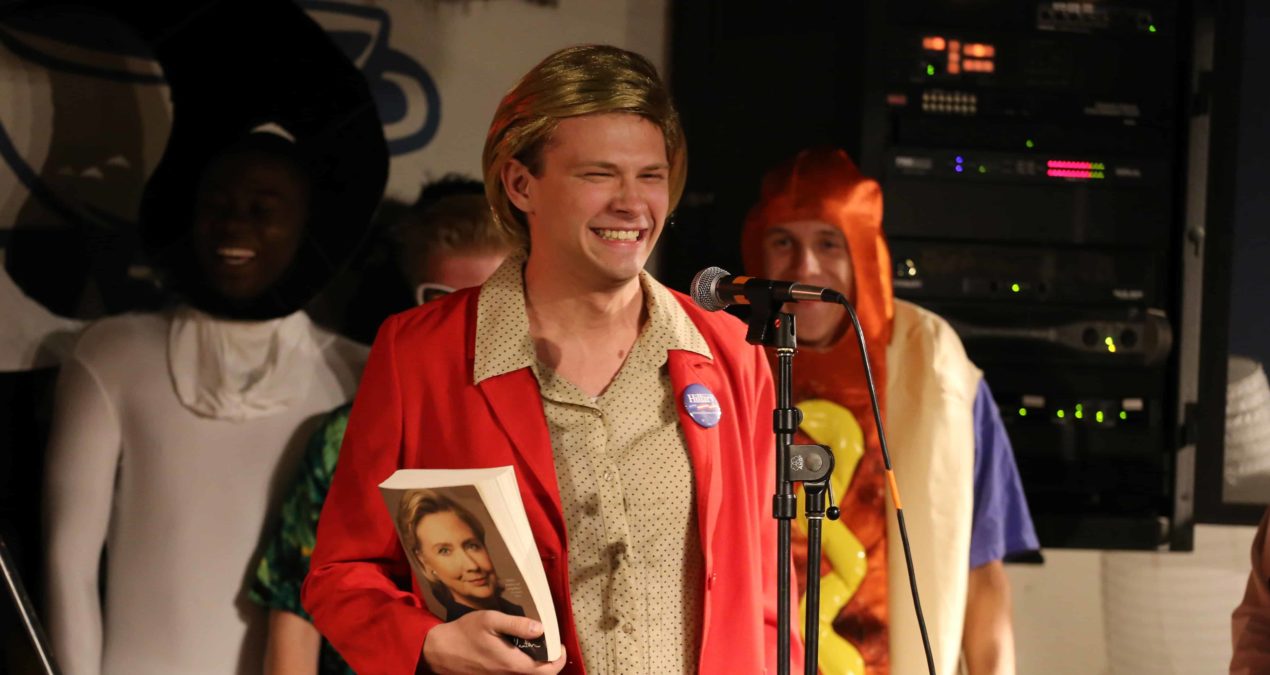 The Denison Hilltoppers kicked off the Halloween season to a packed house at the Bandersnatch this past Thursday with an upbeat, entertaining and satisfyingly soulful show.

Upon walking into the Bandersnatch, audiences were greeted with multiple pumpkins lining the stage, decorated with the cleverly coined carving “HELLTOPPERS.”

Partway into their greeting, the Hilltopper veterans invaded the Bandersnatch, each dressed in purposefully outlandish costumes.

Costumes included Bob Ross, Yin and Yang, South Park’s very own Eric Cartman, Hillary Clinton and what was supposed to be a Ladies’ Night Out member.

The guys opened  the show with Rusted Root’s 1992 classic “Send Me On My Way” and continued to rev up the crowds with oldies-but-goodies like The Beatles’ “Strawberry Fields Forever” as well as more recent favorites like “Pusher Love Girl” by Justin Timberlake and “Can’t Feel My Face” by the Weeknd.

At one point in the show, The Hilltoppers’ newest additions introduced themselves and, had the space been larger, would have had the audience on its feet with their fresh, upbeat and soulful rendition of Shaggy’s “It Wasn’t Me.”

When asked about his experience with The Hilltoppers thus far, Bertman replied, “Singing with the Hilltoppers is one of my favorite things to do. Basically, we never have a concert where we’re not having fun on stage, which makes every performance more laid-back and less intimidating.The fact that we sound good doesn’t hurt either.”

Founded in 1978, The Hilltoppers are Denison’s oldest a cappella group—and for Bertman, being part of the “Hilltopper dynasty was definitely a privilege that I already appreciate, even as a freshman.”

As for the performance itself, members of the audience responded enthusiastically. “I thought it was great,” Francesca Mouery ’19 said. “I really enjoyed the costumes. Hunter Janness (‘17) as Hillary Clinton was my favorite one, but also the guy with the LNO dress. That was pretty good!”

Perhaps one of the aspects of The Hilltoppers that amazes audiences most is the fact that they were able to prepare a set of songs so promptly, neatly and pleasantly within a single hour—and sound pitch-perfect while doing so.