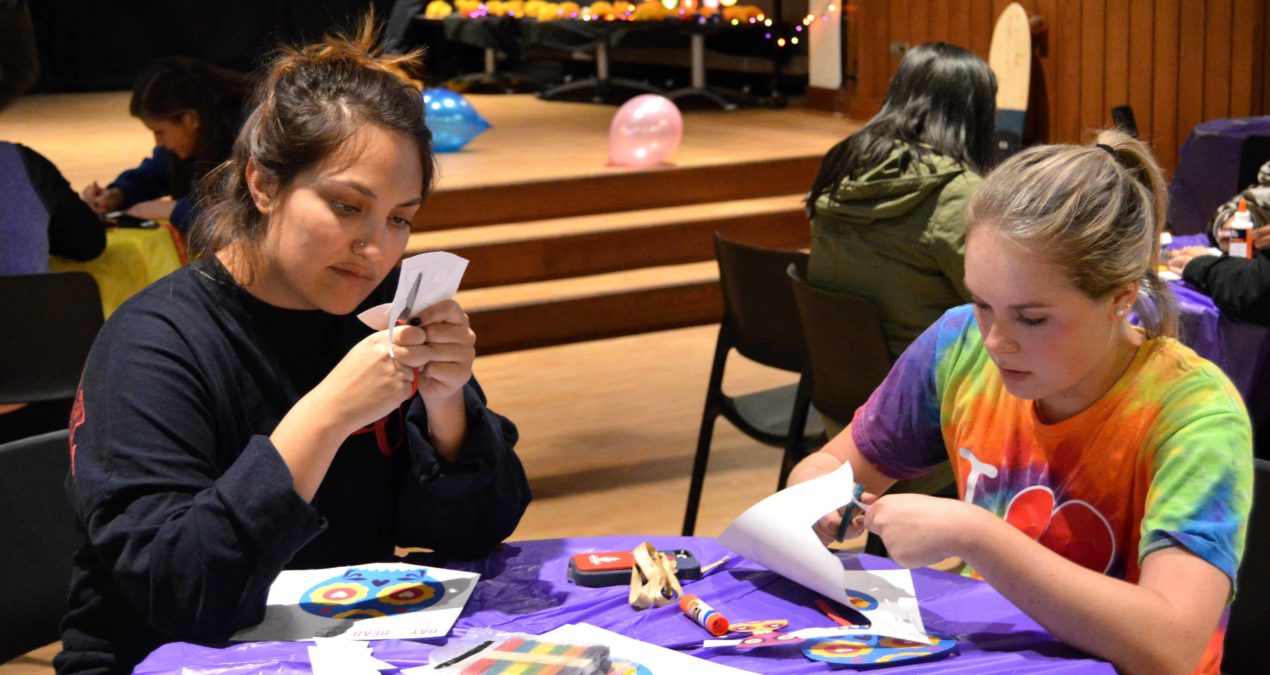 To honor Dia de Muertos, La Fuerza Latina hosted a festival on the third floor of Slayter on Oct. 29. This event usually takes from three weeks to a month to prepare.

The place was decorated much like it is in Mexico, with many bright colors to commemorate this day. Some of the food included rice, beans, tortilla chips, Mexican hot chocolate with conchas (sweet bread), horchata (rice water), and Mexican candy.

Dia de Muertos (Day of the Dead) is a typical Mexican holiday that is celebrated the day after Halloween, on Nov. 1. Family and friends gather on this day to pray for those whose loved ones have passed, and typically set up an altar with objects the deceased loved like food, liquor, flowers, candy, sugar skulls and photos. Festivals take place throughout Mexico and even in other parts of the world such as Guatemala, Brazil and Spain. Dia de Muertos is supposed to be a very festive and happy holiday to celebrate and honor the dead. It is never seen as a day of mourning.

Guests tasted a variety of Mexican sweets that represent what it is like to celebrate this day in the host country. There were also fun games and activities like decorating sugar skulls, face painting, musical chairs and balloon popping.

Students seemed to be having a good time as Slayter continued to fill up throughout the event.

Anissa Gamboa ‘17 the president of La Fuerza Latina and an important organizer of this event, from Chicago, said, “I really love Día de Muertos because you see so many people come together to learn about this traditional holiday that’s celebrated in many countries. It’s also important to know that Día de Muertos is not like Halloween.

Día de Muertos is a holiday that commemorates those who have passed. It’s a time of celebration,”

India Anderson ‘17 from Olympia Fields, Ill. said, “Between decorating sugar skulls, watching and/or playing the fun games like musical chairs, I found it to be really fun! As always, there was also great food and all of the candy you could eat. La Fuerza Latina repeatedly does an awesome job with this event.”

Cathy Lagunas ‘17, a biology major from Chicago said, “I thought it was really great. There were a lot of items that represented the Hispanic culture such as Mexican hot chocolate, rice and beans. I think it was a good way to celebrate Dia de Muertos.”

For anyone interested in joining La Fuerza Latina and taking part in other events such as the next event “las posadas,” a traditional Hispanic celebration, you can join the group in the basement of Moshier-Hutchison every Thursday at 7:30 p.m.