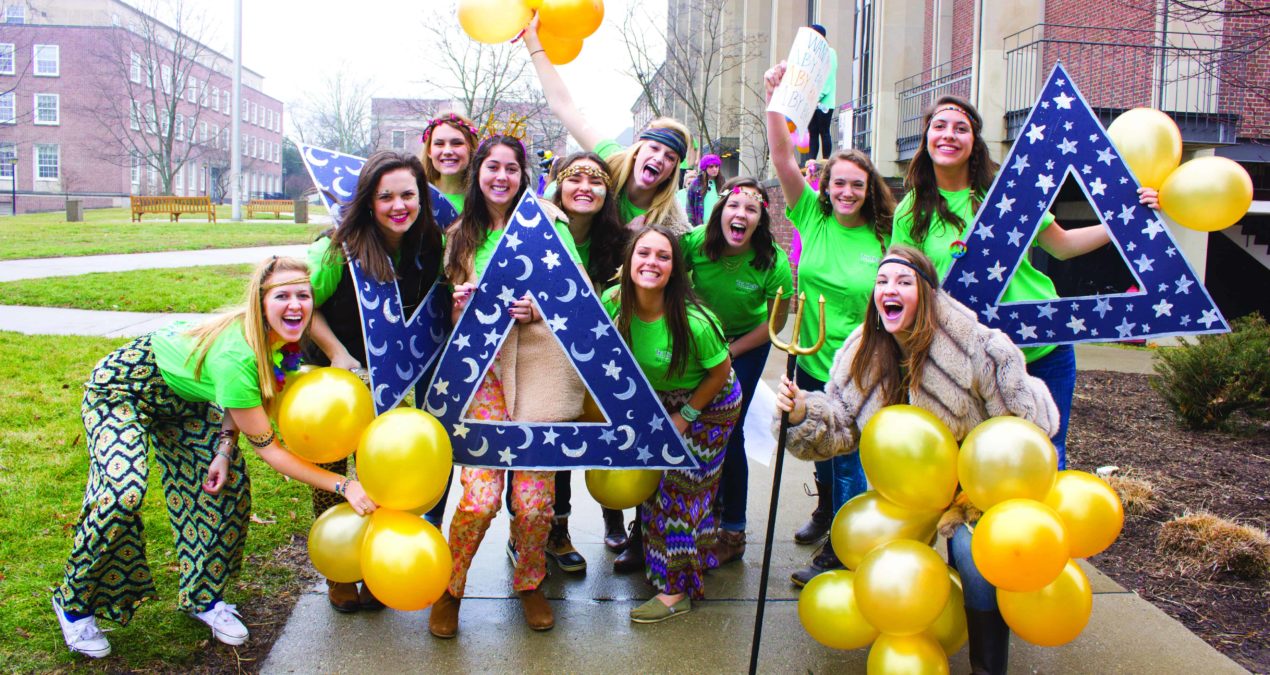 A gaggle of first-year students huddle around their Rho Gammas as they nervously wait for the sorority houses to open their doors for the first night of recruitment. It is a chilly January night and they are bundled up in heavy clothing. Every now and then, someone will whisper to her friend, “Does this sorority haze?”, “I’m freezing! Get me inside, now!” or “I can’t wait for bid day!”

Many of these hopes and worries about Greek life come from stories that affiliated friends at other schools regal over breaks. A friend at George Washington University might have told you about Delta Gamma losing its charter for hazing and underage drinking, and one friend excitedly told you about how great her big is. A friend from high school isn’t being very forthcoming about his pledging experience, but you can tell from his social media presence that his his new brotherhood has been a positive impact on his life.

Greek organizations on every campus share the same values and mission statement that its national organizations have created. However, the practices and culture of Greek communities vary from school to school.

For instance, at Denison, new members generally go through recruitment during the second semester while fall recruitment seems to be the norm at most other schools.

Madeline Abdoo ‘18 received a bid from Delta Delta Delta during the second semester of her freshman year. “I had no idea what sorority I was going to be in, and you hear a lot of stereotypes about each house during the first semester, but once you actually join in second semester, a lot of those misconceptions are cleared up,” Abdoo said. “Going through the rounds also clears up the misconceptions.”

Denison’s Panhellenic Council did not respond to a request for comment.

In recent years, Greek life has received a bad rap at the national level for various hazing scandals, including a recent one at the University of Mississippi that resulted in five arrests after a brother and four Pi Kappa Alpha pledges assaulted a member of Sigma Pi during a botched attempt at stealing a statue from Sigma Pi’s house.

Hazing is also part of the pledging process in sororities at other campuses. According to the 2007 findings produced by the National Study of Student Hazing, 68 percent of women in Greek life have experienced hazing.

“I have some friends who go to schools in the South and I haven’t really talked specifically about the stuff they’ve gone through,” Abdoo said. “But, through word of mouth I’ve heard that almost every sorority down there has some sort of hazing.”

The University has a zero tolerance policy for hazing, which is outlined here.

A recent Denison graduate and FIJI brother, who requested anonymity, told The Denisonian that, “I am so close to every single person in that house. I talk to freshmen who were initiated last year and it’s an extremely tight group of guys. I think it’s all rooted in that we came from such diverse backgrounds and shared the same experience.”

The source added, “I was actually hanging out with a few guys last weekend who are 25 and 30 who were in FIJI. During my time at Denison, I was exposed to alums who were in the house years and years before I was even applying for schools. Great guys who had been hosting the same events and fostering the same connections we maintain today.”

The source declined to elaborate on FIJI’s pledging process.

The school’s acknowledged IFC fraternities have a standard process leading up to bid day. Jared Kriwinsky ‘16, president of IFC and a brother of Delta Chi, explained how the fraternity recruitment process works at Denison: “[For IFC], you have to meet the GPA requirement, which is a 2.5. According to the school, you only need a 2.3. You register for recruitment. The emails about registration are going to be sent out in the next week or two. Every fraternity is required to have one or two registered events with the school.”

Events could be anything from playing basketball to a poker night. IFC hosts several events, including a powerpoint hour and a Q&A about fraternities in general. There is an open house when potential members can tour each fraternity’s lodge space.

Kriwinsky noted that Denison’s smaller student body fosters closer pledge classes. “At bigger schools, you have 130 people joining a fraternity and the seniors never get to know the freshmen,” he said. “At Denison, you get to know everyone because the houses are so small so everybody is treated with respect throughout the process [of joining].”

Abdoo added, “I feel that I’m not only friends with people in my sorority. Some of my closest friends are in different sororities or are not affiliated and there’s no tension between us whereas at other schools, you live in the house and you’re with your sisters 24/7. I feel like there is more tension at those schools and more rivalries between houses. It’s also just a lot more chill here.”

Potential new members will be able to experience this “chill” come January, when they brace the arctic tundras of fraternity row and sorority circle during recruitment.