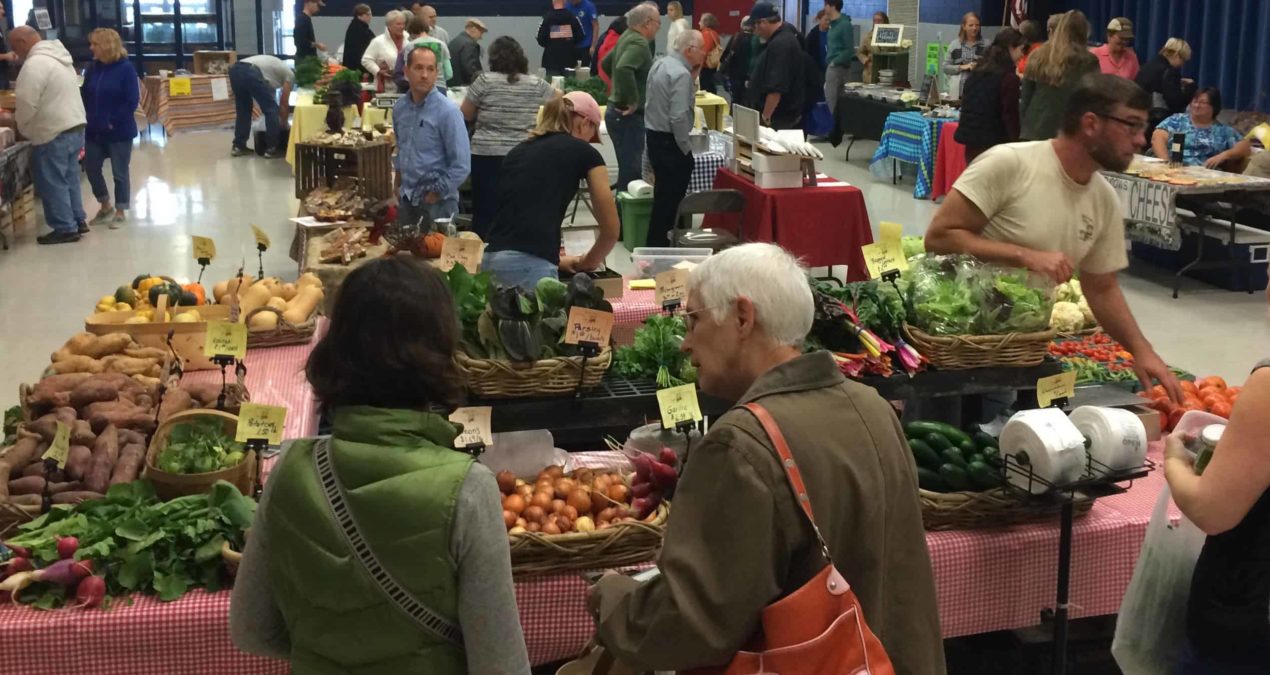 On most Saturday mornings, when Denison students are barely awake, local vendors are setting out their produce, wares and baked goods, and counting their change in preparation for the farmer’s market.  The Granville Farmer’s Market has been taking on North Main Street every Saturday morning from May to October since 1993.

And last Saturday (Nov. 7), it moved indoors at the Granville Elementary School, a couple of short blocks east of East Quad on Granger Street, down the back staircase and across two blocks of Summit Street. It’s open from 9:30 a.m. to noon in the school cafeteria through Feb. 6.

However, a special pre-Thanksgiving market will be held outdoors, on N. Main Street just beyond the Denison entrance, from 8:30 a.m. to 12:30 p.m. on Nov. 21. (See www.granvillefarmersmarket.com for more information.)

With green peppers, tomatoes, baked goods, and dairy fresh eggs, the farmer’s market draws in many Granville natives.  But how good is the produce? Does it taste better than the average grocery store goods? Is it cheaper? Why are Granville citizens flocking to the market every Saturday?

“For Matt,” says Linda, 64 from Granville: a frequent customer of Matt Harmon’s produce stand at the Saturday market.

Matt Harmon has sold his locally grown produce at the Granville Farmer’s Market for 23 years.  His good friend, Linda, grew up with him and has never bought her produce elsewhere.

Born and raised in Granville, Harmon, 66, grew up watching his parents grow produce in their backyard garden.

“We grew a lot of tomatoes. I learned everything I know about growing produce from that,” said Harmon on Saturday earlier this fall.

Matt’s stand at the market is divided into five sections, left to right, green peppers, tomatoes, green beans, potatoes, and onions.  The colorful display of the produce draws the customers in, or perhaps they run to Matt because he doesn’t display any of his prices.

“I don’t believe in it,” he says about writing his prices on his stand.  Instead, Matt throws out his prices in between conversations with customers.

“Hi Sue, how are you? Two peppers for a $1,” he adds in his dialogue.  “Yes, I’m heading down to Myrtle Beach in two months,” Matt continues.

Matt begins growing his produce in his garden in February for green peppers and March for the rest.  Matt has about 150 plants and takes pride in his produce.

He counts back change to his customers: “8, 9, makes 10,” he says as he places crisp one-dollar bills in the hands of an older woman wearing her Buckeye paraphernalia.

“My parents always taught me to count back change.  Customers appreciate it and it helps me ensure that I’ve done my job,” says Matt.

Between counting change, stating his prices and bagging his produce, Matt is somehow able to hold personal conversations with almost every one of his customers.

“How is your husband doing, Mary? Good to hear.”

Harmon keeps his customers coming not only for his produce, but also for his service.

“You shouldn’t buy this produce in the grocery store for many reasons,” Matt explains.  “One being the price. You’re never going to find produce for these prices at your regular grocery store: Two peppers for a $1, two tomatoes for $1.50, a quart of green beans for $2,” he goes down the line, almost subconsciously, like it’s habit for him to name his prices.

“The second reason is taste.  All of the produce that I grow has no chemicals on them.  I tell all of my customers to wash produce with the palm of their hands like this:” He rubs his hand over a shiny green pepper as he’s speaking.  “I learned this technique from my Sicilian friends,” he says.

There’s a lull in his customer rush around 9:15 a.m. and Matt takes the time to reorganize his stand, going down the line from peppers to potatoes.  Despite his consistent conversing, Matt manages to continue to talk about why his customers come to the farmer’s market.

“It’s also about the community.  You don’t talk to people while you’re grocery shopping.  You can’t ask where their produce came from, they can’t tell you how to properly wash them.  It’s a different experience,” he says.

While Granville residents congregate at the market every Saturday, the Denison University students seemed to be lacking representation.

“I just think it’s so much easier for me to grab fruit and vegetables at the grocery store.  I feel like the market is good for people buying mass quantities of produce, which isn’t me,” says Caroline Teleisha, 20, a senior psychology major from Long Island, N.Y.

“I think I’ve gone twice in my four years at Denison,” says Madison Kavanaugh, 21, a senior biology major from Springfield, Ohio. “If I do buy produce, it’s usually because I’m wanting it at that moment and the grocery store is the only way to be able to get what I want, when I want it,” says Kavanaugh.

“I really love the farmer’s market, but I rarely get my act together to get up and go on Saturdays.  When I do go, I roll in close to noon and mostly everything is gone,” says Anne McKiterick, 22, a senior history major from Columbus, Ohio. “The few times I’ve actually gotten produce from the market, I do notice a difference in taste compared to the grocery store produce.  The vegetables taste crisper, for some reason, and the berries are definitely sweeter,” says McKiterick.

Despite the number of students who said they rarely go, one Denison University student seemed overly excited about her experiences at the farmer’s market.

“I love the market,” says Helen Heutel, 21, a senior biology major from Columbus, Ohio.  “I really try to go every Saturday, even if it’s just to walk around and people watch,” says Heutel.  “I buy all kinds of fruits and vegetables and they usually last for a long time and the prices are pretty cheap,” continues Heutel.

Heutel also lives on Denison’s south quad, which is down the hill of the campus and a short walk from the market.

“I think living on South Quad makes it easier for me to just walk a block or so to the market, but even when I lived on East Quad I went all the time,” comments Heutel.

Despite Heutel’s enthusiasm, the market sees relatively few students.  While students who do not go to the market miss an experience, they do still consume market produce in Denison’s dining halls, though they may not realize it. Chefs at Denison have been seen at the market talking with vendors whose produce is now served in university cafeterias.

While price makes a difference, quality of produce seems to as well.  Produce from the market lasts “for weeks,” says Harmon. “The grocery store produce will last you a few days before it starts going bad.  You never know if you’re buying that produce on its last leg,” he continues.

With cheaper prices and better quality, what more reason does one need to go to the market over the grocery store? The people.  Walking into the farmer’s market on Saturday is nothing like walking into the grocery store.  Customers purchase goods between catch-ups with neighbors, friends and vendors like Harmon.  Farmer’s market shopping breaks include a short walk over to Village Coffee Company, where the line is usually out the door and groups of people sit outside in the crisp autumn weather, enjoying their beverages.

The grocery store may win in the convenience argument, but the farmer’s market brings people together through a mutual love of good food.

“This isn’t a grocery store, it’s a tradition,” says Harmon.