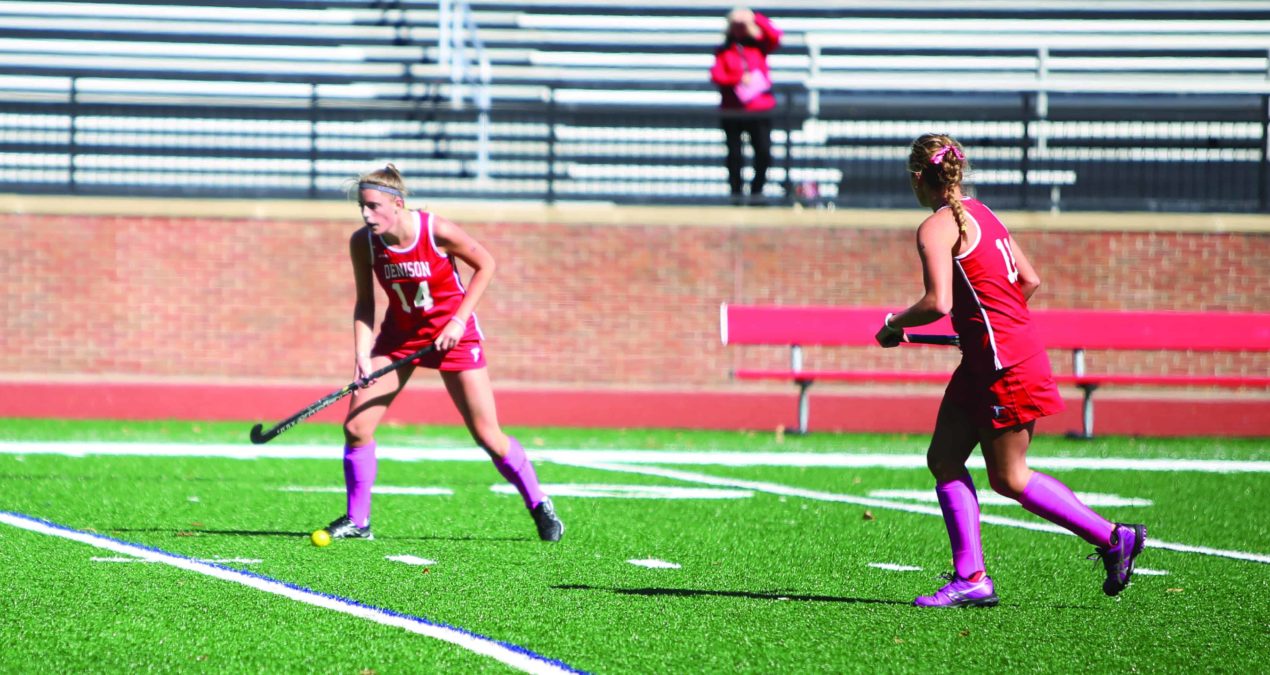 On Wednesday, Oct. 28 in Granville, the Big Red field hockey defeated the Wooster Scots 3-2 in overtime.

The Big Red gave up the lead early in the first half, but Jen Durbin ’18 scored an equalizer, her 11th goal of the season. Scoring resumed in the second half when Jane Higley ’18 hit a shot off the Wooster goalkeeper and into the cage.

The Big Red were leading 2-1 with only seconds remaining when the Scots scored to tie the game at 2-2, forcing the game into overtime as the Big Red were unable to capitalize on their final possession in the game.

Denison entered overtime with strong momentum. Britta Marden ’16 took a shot at goal right out of the gate; however, it was cleared by a Wooster defender. Thirty seconds later

Lucy Pearsall ’19 scored the game-winning goal of an offensive corner for the Big Red. This goal marked her second game-winner.

Denison’s victory over Wooster moved them to 10-3 in the North Coast Athletic Conference, with their final regular season matchup against Kenyon that Saturday.

The Big Red took on the Kenyon Ladies at home on Oct. 31, falling 4-1 to the first place team. At the start of the game, Denison’s five seniors (Elsie Humes, Allie Bacon, Sadie Conley, Greta Finney and Britta Marden) were recognized for their hard work and dedication to the field hockey program.

“The seniors are such great role models and their dedication to the sport and the team motivates all of us,” Higley said.

“The senior class has a large presence on the field and we will definitely miss them next season.”

Denison started off strong with a goal from Pearsall from the top of the circle off a Big Red corner. However, in the 29th minute Kenyon started their scoring streak with a goal from Shannon Hart. Kenyon scored three insurance goals soon after.

The Big Red led in penalty corners and shots but were unable to capitalize on these opportunities. In regards to the loss, Higley said, “We played our hearts out against Kenyon, but unfortunately things didn’t end up the way we hoped. We came out strong during first half and held the score at 1-0 leading into halftime. Kenyon came out even stronger at the start of the second half and took control of the pace of the game. It was during that time that they scored four goals, and even though we increased our intensity nearing the end of the game, we couldn’t recover from the deficit.”

The Big Red women will play DePauw in the semifinals.