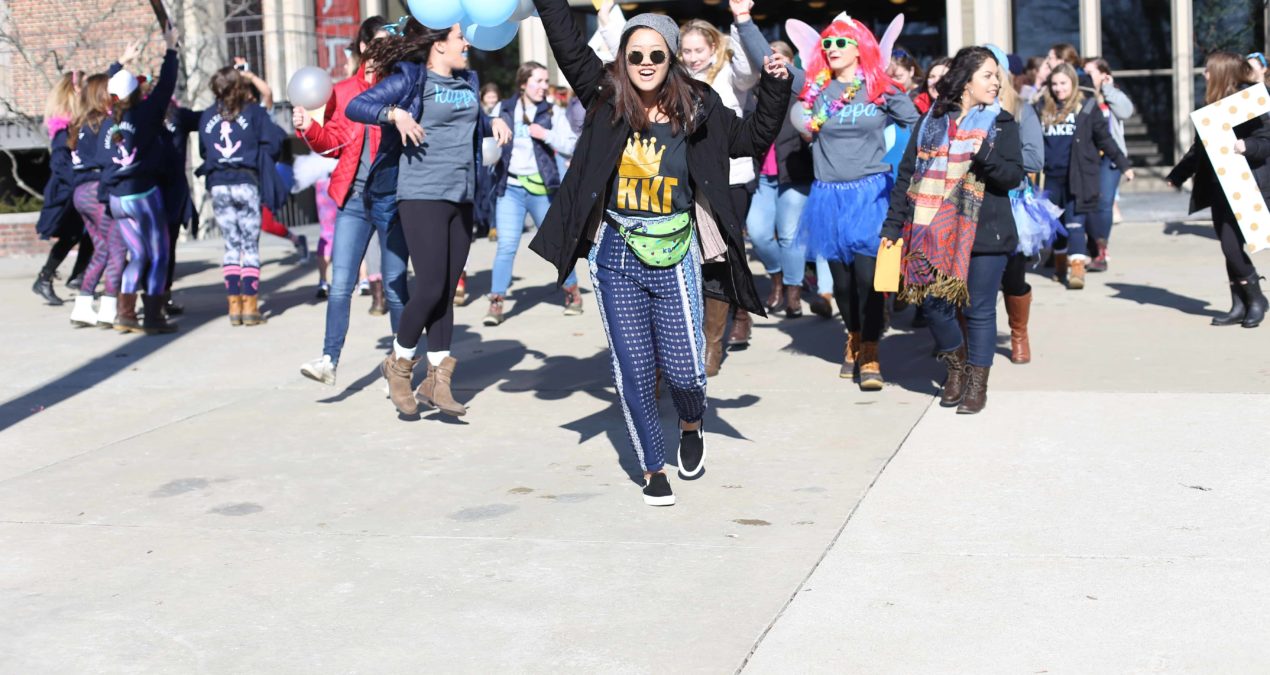 Buzzing with the anticipation of recruitment, around 200 girls were welcomed into the beginning of Panhellenic Greek life at Denison this past week.

She said, “I liked the concept of sororities because it’s so many people who come together for one thing. I always look for being around different kinds of people and being able to foster those relationships.”

Recruitment began Tuesday as women gathered at the sorority houses on south quad and spent their time speaking with current members.

Some were skeptical of Greek life prior to going through recruitment, but quickly realized that their preconceived notions about what it meant to be a “sorority girl” were entirely wrong. Wyatt Ashby ’19, said, “I thought it would be way more superficial than it was. I was very worried about how people would look at me and make judgments about how I looked, how wealthy I was, or how I dressed. It ended up being very welcoming.”

Speaking to the wrongful stereotypes that surround sororities. Reyes said, “There are so many different kinds of people in Greek life and to think that you can put a group of women into one big category is ridiculous. It has made me think about how we categorize people into things and don’t give them a chance. It was really eye opening for me because I realized I was being really judgmental at first.”

Through understanding the sentiments of a few women who decided to go through the recruitment process, it is very evident that Denison’s Greek life is a rare kind. A kind that makes one aware that there are “women on campus who are great leaders,” as Ashby said. Members of Delta Delta Delta, Delta Gamma, Kappa Alpha Theta, Kappa Kappa Gamma and Pi Beta Phi, greeted masses of eager women into their houses last Thursday through Saturday as they prepared to be the stepping stones for first year students’ entry to Greek life.

“I wanted to find a group of women who were very focused on charity, or spending time together, or having fun.” said Ashby.

“I feel like a lot of people want to have a type of sisterhood,” she said. “After coming out of high school and coming into college, it’s important to have a close community.”

After the recruitment process, there was a sense of collective optimism.

“Since Denison is such a small school and great community, their Greek life is not as exclusive. They really want to welcome you. I’m really excited to find out which one I’ll end up in. It’s just really fun.” said potential  new member Ashby.

“What’s really nice is I feel like you have a closer bond to people because Denison has smaller sororities and they really want to know your name and know who you are,” said Fourke. “In the long run, it gives you a chance to make life long friends and add to your experiences.”

Recruitment week at Denison proves to be a positive experience unlike anything on other campuses.The recruitment process at Denison is unique and offers individuals on campus an opportunity to be a part of something bigger, literally – the five chapters overseen by Denison’s Panhellenic Council are nationally affiliated with women’s organizations that represent more than 4 million women at 655 colleges and universities.

Denison’s intimate community and alternative Greek life provide women the opportunity to expand their relationships and challenge their understandings of stereotypes. Such inclusivity and positivity is reflective of the diversity on Denison’s campus and an overall attitude focused on developing meaningful relationships.