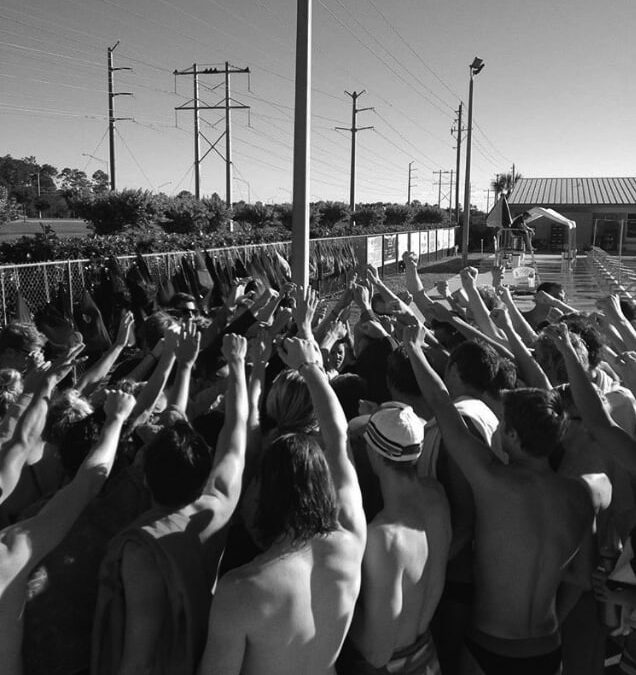 While most Denison students were sleeping soundly at 5:15 AM on Dec. 28th, the Denison men’s and women’s swim teams were diving in for the first of two practices of the day in Naples, FL, kicking off their annual training trip.

A large coach bus departed for Florida from the Mitchell center on Dec. 27. While some members of the team endured the 18-hour bus ride, many members opted to travel by airplane to the Ft. Myers airport and rendezvoused with the team in Naples.

The men and women followed a grueling schedule during their week-long trip. Practices took place from 5:15-7:15 AM and 1:30-3:30 PM each day, and varied between in-water workouts at the YMCA Norris Aquatic Center pool and dryland workouts at the Greater Naples YMCA. The team’s hard work was rewarded with a pair of afternoons off to relax and have fun on the beautiful beaches of Naples.

The T2 Aquatics pool was not outfitted with diving boards for the divers, which meant that they had to train separately from the swim team at the Golden Gate Aquatic Center. The divers spent their break in Ft. Lauderdale to train at the Ft. Lauderdale Aquatic Complex on Jan. 3-4.

“The primary purpose of the training trip is to begin our final preparation for championships in February and March,” he said. “The focus in Florida is on increasing power levels and overall speed while also developing and refining race strategy.” He also included that mental preparation and boosted confidence levels were significant focal points.

Haley Nugent ‘18, a member women’s swim team, commented on the time that she spent with her teammates during the training trip. “Spending time where we could solely focus on swimming faster and smarter was a huge confidence boost to us as we get closer to NCAC’s and nationals.”

She also spoke about how it helped to increase camaraderie among team mates. “We lived together in condos with members of every class, so there were no divisions. We had lots of team activities that helped us form closer bonds than we would just from practice and class.”

Ben Burdick ‘18, also commented on the successes of the training trip. “Being in a situation that doesn’t have outside influences like school helped us to effectively narrow in our focus. The weather was warm and it helped to give the team a confident attitude to help us achieve the ultimate goals ahead of us.”

The schedule was rigorous, but Burdick knows that it was necessary. “Training was physically demanding, but was well worth the time spent and was an important part of the training process.”

The team continues to prepare for the NCAC championships, hosted at the Trumbull aquatic center on Feb. 10-13.

Letter To The Culture

Students Come Together in Celebration of Jewish High Holidays