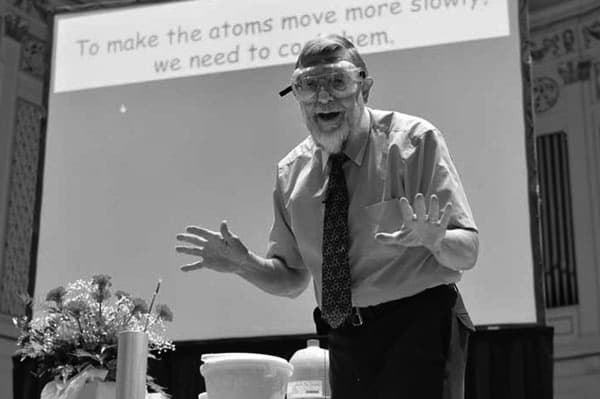 “When I say it’s the coolest stuff in the universe, I mean it!” Dr. William D. Phillips said, referring to an atom which had been cooled to 700 nanodegrees Kelvin.
Prior to this statement, he had been spending much of the time demonstrating how cold liquid nitrogen was: cold enough to boil when touched by a room temperature bouncy ball, to flatten balloons and shatter them like china, to freeze stretchy rubber bands which could then be snapped like twigs.
Phillips even made the analogy of the advice mothers supposedly give about not putting closed containers of liquid in the oven.  The room being warm enough to be an oven in comparison to the cold temperatures of the liquid nitrogen, Phillips sealed a bottle of liquid nitrogen and placed it under a trash can, which was then sent flying into the air minutes later as the bottle exploded.
When everyone had had a good laugh to shake off the embarrassment of having jumped at the sound of the explosion, Phillips said, “Your mother was right.”
After having a little fun pouring liquid nitrogen all down the aisles of Swasey Chapel, Phillips said, “This was a lot of fun, but there is actually a point.”
All this time had been spent to demonstrate the coldest substance imaginable and show that Phillips had worked to get atoms millions of times colder.
Phillips, who has received a Nobel Prize in Physics for his work, has spent time working with “the coolest stuff in the universe” since 1978 when he began working for the National Institute of Standards and Technology, the goal being to create an atomic clock.
The presentation, which was held in the evening on February 11th, began with an explanation of time.  Time is relative, Phillips explained, so how accurate is a clock, really?  Every clock ticks differently, depending on the length of the pendulum or the vibrations inside a quartz watch.  To get an accurate time reading, you need to have a constant, unchanging “tick.”
Cesium atoms were the solution to this.  The periods of radiating waves were consistent and could be used to measure a second.  However, the measurements could not be taken because the atoms moved too quickly.  The only way to get them to slow down enough to measure the time was to lower their temperature.
After doing some tests, Phillips found that he could get the atoms to 77 degrees Kelvin, moving about half as fast as their original speed.  “I have not spent 30 years of my life making half-fast atoms,” he said with a laugh.
Then, they began trying to cool the atoms with lasers.  This was a challenging idea – don’t lasers heat up things, not cool them down?  But Phillips explained that certain colors, or wavelengths of light, can actually move atoms, and when put opposite each other, they can slow down the atom, thus lowering the temperature.
This was senior Ben Khoo’s favorite part.  Khoo said he liked “when he started explaining laser cooling, and when it clicked for me.”
Alex Woroncow ’16 agreed, saying, “We were geeking out.”  He added, “I think it was really cool that he was able to explain such complicated subjects in small visual terms, especially considering the smaller members of the audience.”
Indeed, there were young children and visiting high school students who attended the presentation.  Though the concepts were, in all likelihood, over the heads of many people, Phillips kept things engaging with visual representations, and pouring liquid nitrogen just for the fun of it.
All in all, the presentation was one that everyone could enjoy, showing the ways in which science is cool.

3 Songs to Help You Build Resilience This Semester