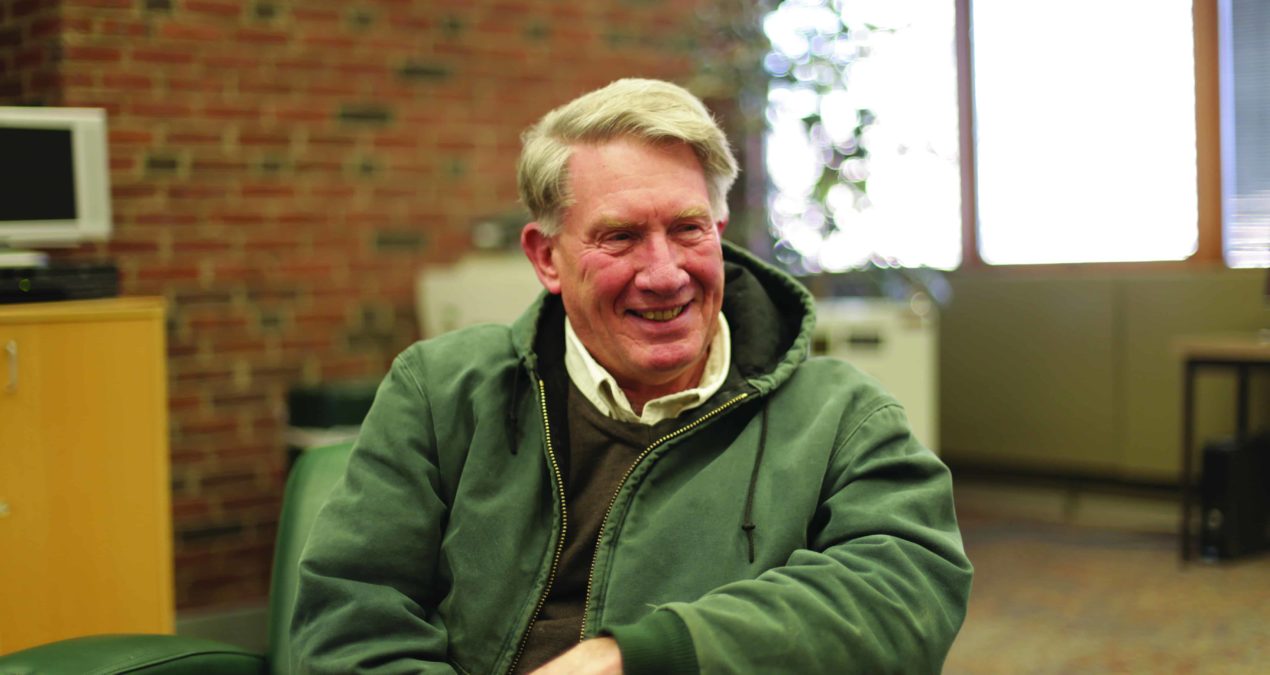 While most undergraduates dread the coming of another semester’s workload, Denison student Alan Larimer looks at every opportunity for knowledge as a gift.

If not in the classroom, Larimer can be found engaged in his latest read in the library. There will be no trouble finding me,” he says, “I will easily be the oldest person in sight.”

At seventy-seven years of age, Denison alum and current student Larimer is back for more, and his life journey speaks wonders to the person that he is today.

Denison has been in the Larimer blood for as long as Alan can remember – his parents met and married on the hill sometime in the 1930s. Growing up some 300 yards from campus, Alan attended the Big Red as well.

“I lived in Curtis, and I still remember my first mixer. I wore a nametag that said I was from Sydney, Australia, just for fun” said Larimer. After three years at Denison, Alan was admitted directly to Dartmouth medical school in 1960 and graduated from Duke in 1964, medical degree in hand.

“I saw everything here,” explained Larimer. “It was a fantastic experience, 2,400 beds, 94 interns; they simply don’t do stuff like this anymore.”

Alan’s life continued as he served in the U.S. navy as a flight surgeon and later on as a medical physician at The Naval Academy. However, determined not to stay in one place for too long, Alan began his residency in Philadelphia in January of 1970 which began the journey towards his life’s work.

“Life during my residency was hard. It was all so different then. The environment was comprised only of men; we were all supposed to be hard-asses. I was raised in an environment where asking for help was a weakness. Times have changed now, and all for the better.”

In 1986, Alan opened his own orthopedic practice in New York City: “This was my biggest service to the world. Each year you continue you survive in a business like this, and that’s a success.”

Though his practice closed down in 1991, Alan continued to practice medicine across the U.S. He spent time in Alaska and Hawaii, igniting his love for travel and the outside world.

In 2011, Larimer made the decision to put an end to his medical career. He explained, “After 50 years of medicine, I was done. I had nothing left to prove. I had become obsolete, and that was okay.”

Though this was the end of a journey, Alan’s quest for knowledge and his vivacious outlook on life continued.

Alan came back to Newark in 2011 and began taking classes at Denison to fill his days. “I can take one class a semester. I’ve taken 8 Mitchell Snay courses,” he said. “I love the fact that I get to put some structure on all of the crap that I learned in high school. It makes me feel like I’m learning some important things, even if I can’t process it all.”

Mitchell Snay, Denison history department had nothing but positive things to say about Alan as a student.

“Alan Larimer has been one of the greatest ‘new breaths of fresh air’ in my 29 years of teaching at Denison. In each class, Alan has brought curiosity, intelligence, and a great enthusiasm. He will read extra material not even assigned. He’s become a voracious reader and book collector, and a role model for other students. I only wish Denison had more community scholars with his virtues.”

Now that Alan has attended Denison once as an undergraduate and again as a community scholar, he reflects on how life as a denisonian has changed drastically over the years.

“The past is another country.” He explained, “Let’s put it this way, if you’re going to wear a baseball hat turn it around the other way. Someone was once eating an apple during lecture, which was ridiculously loud. Oh romances in classes’ bloom, that’s always interesting. They sit by each other for months then they move to the other side of the room. Some of the students have real promise. I like this.”

Leaving Denison students with one final piece of advice, Alan would like to say, “There are few times you can say you know exactly what you’re doing with your life, and that it’s exactly the right thing to do. I had this once in my life, with my wife Susan. Wait for that kind of feeling, because the rest of it doesn’t matter.”

Oh, and one more thing: “Don’t use the elevators, take the stairs. You people need it.”