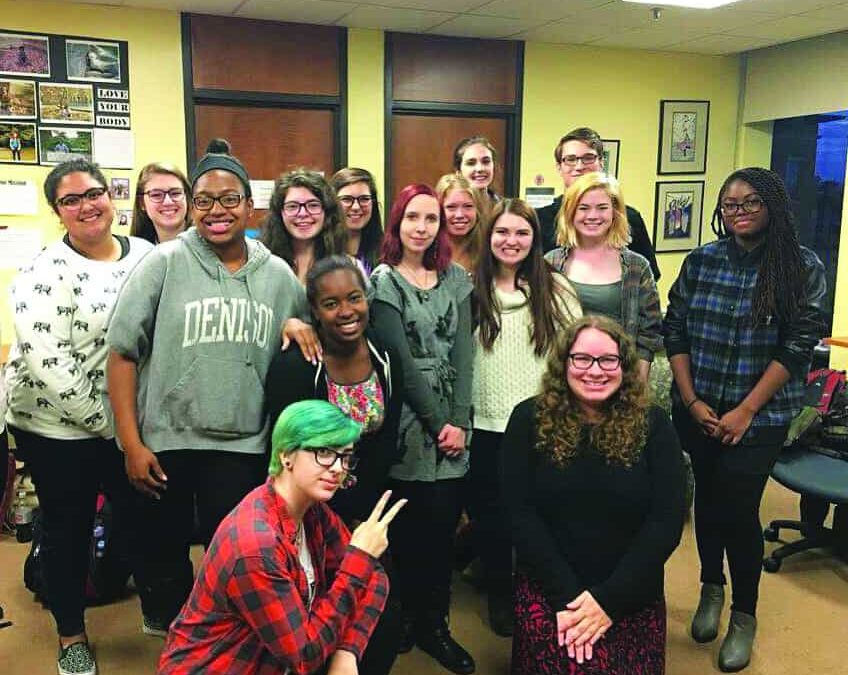 It is easy for some to hide behind a screen and rant, berate, or sympathize. Denison Feminists wants to bring people out from behind their keyboards and voice their opinions over topics such as classism, women’s reproductive health, and cultural appropriation.

“It’s easier for people to access their empathy in person,” said Erin Katalinic ‘16, the president of Denison Feminists, or Den Fem’s for short. “If you’re able to talk things out face to face, it puts perspective to it because it’s a lot easier to care about someone when you can see them.”

Over the past year, Den Fem’s attracted attention from online arguments occurring over their facebook page. The group has tried to encourage a more healthy online presence by drafting a set of guidelines for the page.

“It just wasn’t a productive forum for conversation,” said Emily Pugliese ’17, the club’s activist chair. “There were hostile arguments between people stemming from articles posted on the page. We’ve tried to step away from that, and we believe that our meetings have progressed and become more productive because of this.”

Katalinic wants the meetings to be a safe space that garners stimulating conversation about the issues facing the Denison community and the greater society as a whole.

Denison Feminists separate their work between meetings and activism. This week, they are hosting two events: a showing of Vessel on Monday, and a talk by Angela Davis, whose event is also cosponsored with the Black Student Union. Denison Feminists are also financially sponsoring the Genital Monologues (a student-run response to the Vagina Monologues), which will be held this Saturday in the Knapp performance space.

“I’m a big fan of the Genital Monologues,” Katalinic said. “Students write about sex, sexuality, sexual assault and personal empowerment.” Last year was the first year Denison Feminists financially sponsored the event, and Katalinic says they plan on doing it again next year.

In March, the executive board will head to Washington D.C to take in the National Young Feminist Leadership conference. By going to events and sponsoring ones on campus, the group hopes to foster discussion and bring about real change on the Hill and beyond.

“Just be open to discussion,” Pugliese said. “Come, learn, and have an open mind.”

Denison feminists meet Wednesday from 6:30-7:30 at the Center for Women and Gender Action on Slayter’s 4th floor.