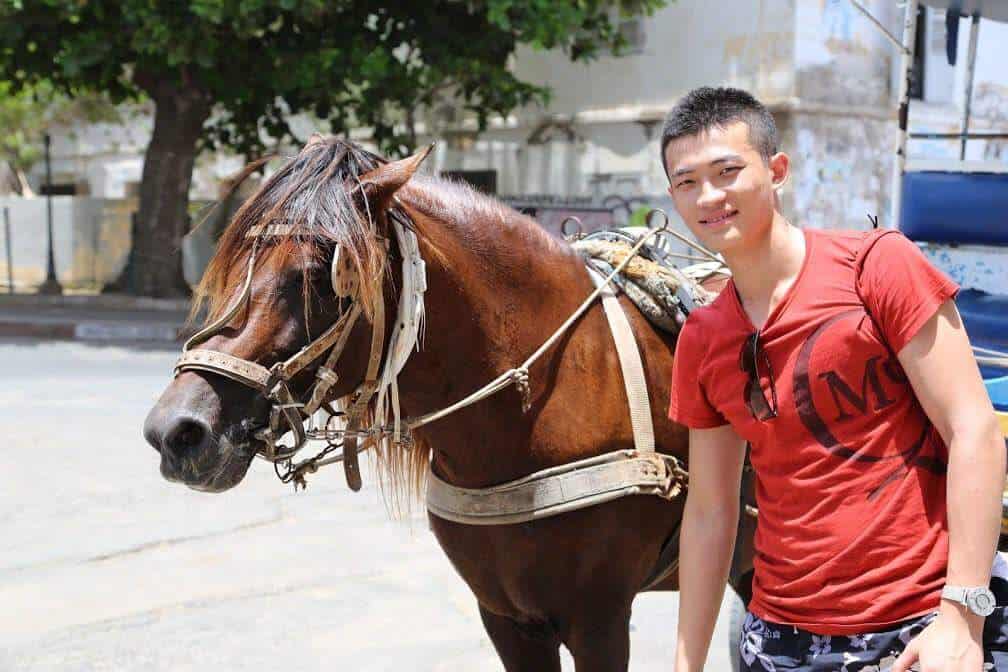 Studying abroad is something that most Denison students do during their junior year. However, Zhihao Cao ‘16, an international studies and communication double-major from Chengdu, China, is spending all four years abroad studying here in America as an international student from China.

For Cao, basketball played a huge part in fantasizing over American life as a teen. He stated that Yao Ming’s draft to the NBA influenced his love for basketball. “I always watched the NBA growing up. Basketball was a gateway to social connections for me.”

His best friend’s influence on his life was the seller in Cao making his decision to take on America. “He was telling me, ‘Dude, if you finish high school in China you’ll have this exam called the college entrance exam in which your career and where you’re gonna go is dependent on that score,’” Cao said. “Millions of students take the test. But instead, he was encouraging me to come to America to learn English better and get more in tune with that culture.”

“Getting an education there rather than even a prestigious school in China is a huge difference,” he continued. “American higher education is really renowned and respected in China. I came here early with the hope that I could do as my friend said, so I landed at Denison. My understanding of the world would be different if I had never chosen to go abroad and get this education.”

Cao always had the intent to strive from what was expected and stray from being the stereotypical Chinese international student. He confesses this is why he chose communication and international studies as his majors since they both involve a lot of writing and a lot of English. He used these skills to better brand himself and make stronger connections with his peers.

“I joined Beta Theta Pi as a second semester freshman and through that I became a philanthropy chair and got the experience of managing tasks, delegating with others who did the same,” Cao said. “It wasn’t until the second semester of my sophomore year that I got really involved. I organized King of the Wing—a chicken wing eating contest—that was really popular. I didn’t know until then that I had this ability, so I wanted to get even more involved with event planning.”

Cao became the vice president of GCC (Global China Connection) and later became president of DISA (Denison International Student Association). He mentioned that it pertained a lot to issues he faced internally—no longer wanting to separate himself from the rest of the community of Chinese international students, or recognizing himself as part of the “cool American crowd.”

“The whole [GCC] council was Chinese, as expected,” he said, “and I wanted to recognize within myself that this was still me—a Chinese international student, just like them.” Cao used his newfound revelation to think of ways he could bridge the same gap he bridged within himself between other groups of people. He launched Taste of Culture in the Spring of 2014.

“Taste of Culture is the highlight of my Denison career. I really got to meet different groups of people and different opportunities came to me,” Cao said. “I want it to resonate with people the same way D-Day does—every year, people are looking forward to it. So I’m really hoping that the people I work with will be able to help me see this through.”

Cao hopes that this year’s Taste of Culture will be more inclusive to the Granville community and Greek life. He wants other groups that aren’t necessarily seen as minorities to be a part of the gap bridging he envisions.

“I’m a big fan of his,” said Amanda Gunn, the associate professor of communication. “In classes, he is someone who—when he does speak up—can have very insightful responses. His willingness to share with me what it’s been like as an international student and his commitment to find and create paths that make it easier for international students in the future is fantastic.”

He also mentioned that taking a communication course of hers enabled him to reflect more on this revelation, having to write a reflective piece on any life experience of his choice. “I wrote about myself as an international student and gained a lot of inside perspective on my whole journey with like, international student versus just an American student like everyone else,” Cao said. “I came to the realization that I don’t have to be defined. I am both. I don’t have to please anybody to gain membership to a community. I am me. It helped me to stop being indecisive—to just be myself.”

Life after Denison for Cao sets the hope for new and exciting things. “I’m not motivated by money or fame. I’m more motivated by purpose and fulfillment for me. As a senior looking for jobs right now, I’m looking at consulting,” he said. “It involves a tremendous amount of communicating and writing skills, analyzing and critical thinking. Advertising, marketing, public relations and event planning are also interests.

“I actually want to get my masters in Europe; America’s growing old on me,” he continued with a laugh. “Just to experience different things and be in a new place, thinking about it even gets me really excited.”

“When I think of Zhihao, I think of compassion,” said friend and roommate Dylan Weinand ‘16. “He genuinely cares about people, and is sensitive and aware of how people around him are feeling. It’s a rare and exceptional quality. He’s a super loving dude, and a blast to be around.”

Through all of his experiences and finding himself and his passions, Cao feels like he made the right decision. “My experience in America brought a purpose in my life. It provided me with the lens to see myself,” he said. “I realized my potential, my skills, what type of person I am.Realizing myself and what I can contribute was a big thing for me.”