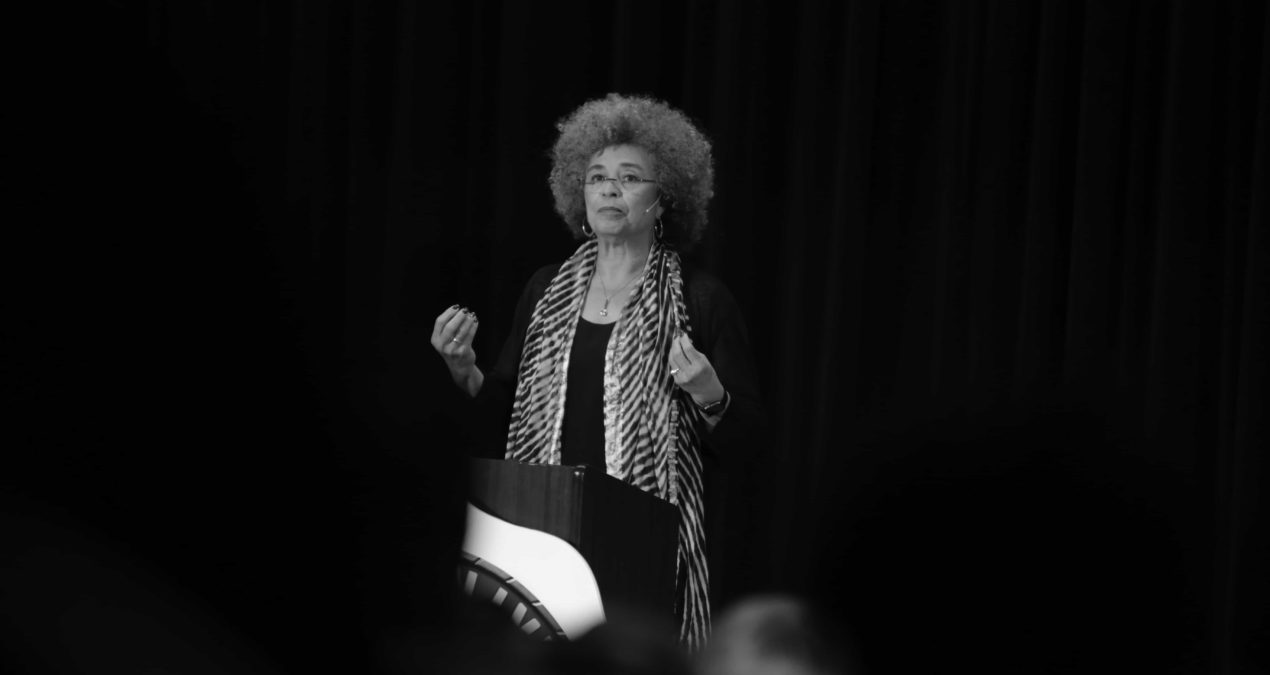 “They say that freedom is a constant struggle…Oh, Lord, we must be free.” Angela Davis recited the lyrics of the popular ati-war song to a packed lecture hall of members of the Denison community on Feb. 11 in Swasey Chapel.

Davis made a name for herself during the 1970s when she was placed on the FBI’s most wanted list and labeled a terrorist by then President Nixon for murder and kidnapping charges, according to an article published on October 14, 1970 in the New York Times. After her arrest, Davis said that she was innocent, and she was later acquitted of all charges.

The activist spent her talk focusing on several topics that are as relevant to the obstacles she overcame in the 70s as they are for activists today. She began by reflecting on her time judging cases surrounding Palestinian affairs.

“I was a juror on a tribunal that convened in New York City and our task was to examine the extent to which the United Nations and the United States were implicated in the operation of Palestine,” Davis said. “Other members of the US including Alice Walker, Dennis Banks, John Waters—it was a very insightful gathering and we had the opportunity to hear a number of witnesses who testified.”

Her take on how the prison system operates was also repeated several times throughout her discussion. “The jail has somehow become the solution,” Davis said. “Prison has become us ignoring the problem and putting people in jail to deal with it later.”

She later explored the relevance of implementing useful strategies into activism today and the various ways these tactics can be applied. “Being an activists shouldn’t be all about suffering,” Davis said, “and it ought to be possible where there is suffering and pain to produce joy through the community.”

Self-care and concern for the health of others in activism was one of the major points Davis made.

“One of the many problems we encountered was we tended to worry ourselves to death. We know now that we can engage in collective self fear as we work together and that can be a part of the process of building community as opposed to thinking we’re in it alone,” she said. “Black Lives Matter and the way in which they incorporate the importance of taking care of ourselves as we struggle is great.”

Her latest novel, Freedom is a Constant Struggle: Ferguson, Palestine, and the Foundations of a Movement, relates back to the lyrics stated in the opening.

“I like the critique and the inspiration [of the song],” Davis explained. She noted that she paid attention to the way the verses come across as statements, but are actually prompting us to dig deeper into their meaning.

This was Davis’ third visit on campus, the first visit being in February of 1981 and the second when she was the guest speaker for a MLK Day convocation since then. Davis was brought through help from the Black Student Union, the Laura C. Harris symposium, Denison Democrats, Denison Feminists and UPC.

“Last semester, we felt Bobby Seale’s appearance was beneficial in light of the upcoming fiftieth anniversary of the Black Panther Party’s establishment,” said chief minister of the BSU Ariel Baez ‘16. “Having Angela Davis come to campus was a part of my plan for the BSU in bringing back Black influential figures during Black History Month. Of course we wanted to do something big.”

The theme for this year’s Laura C. Harris symposium is citizenship. “We felt that Dr. Davis has really embodied the idea of ‘active citizen’ consistently in her life,” said Gill Miller, chair of women’s and gender studies and professor of dance.

“Dr. Davis’s call for revolution over reform, where necessary, is inspiring, especially for those doing the groundworks of social justice in local areas around local issues.”

Miller continued, “My hope is that [Davis’] talk at Denison could open up discursive space, so that we could talk more freely with each other about our responsibilities surrounding social justice, even in confusing situations that seem, on the surface, to be counterintuitive.”