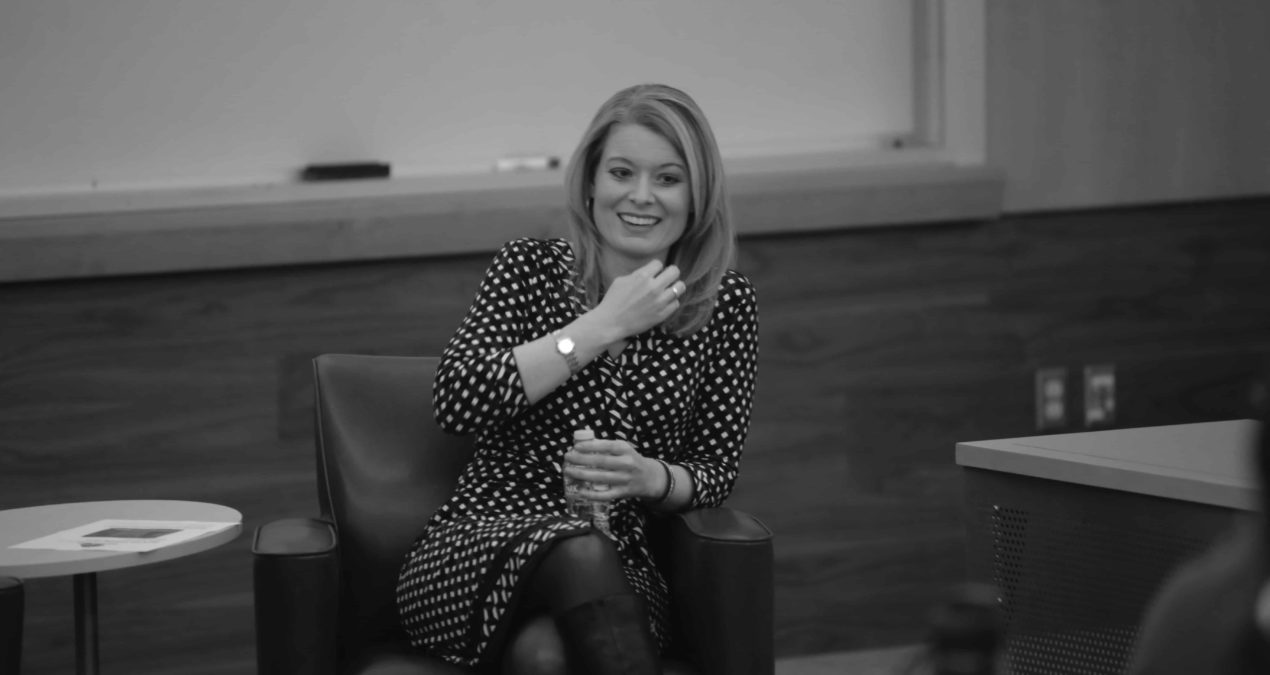 Every day is an adventure for Kristin Volk. The 2004 Denison alum is now an investigative journalist for WEWS-TV, Cleveland’s Channel 5 News. Volk spoke to an intimate crowd about the fast-paced world of television journalism.

“I’ll pitch a story at 9:45 a.m. and have it on air at 6 p.m.,” Volk said. “We do one story a day, and if we don’t have someone to talk about the story, then we’re screwed. Sometimes we can’t get started until noon.” Volk knew from a young age she wanted to get involved with television journalism, specifically as a reporter. At Denison, she interned at an ABC affiliate news company in Toledo, her home town. There she worked as an intern during winter, spring and summer breaks. Upon graduation, the company offered her a job as a line producer, but Volk turned it down to pursue a career as a reporter.

“A liberal arts education is good, but not a good place to learn broadcast journalism,” said Volk, who majored in communication and French at Denison. Volk earned a master’s degree in journalism at Northwestern. From there she moved to Washington D.C., where she  worked under various titles such as producer, freelance writer and Washington correspondent for WTVG Toledo.

Volk spoke to the group of students about those stories and the challenges of working in the journalism industry.

“Old news is old news in minutes,” Volk said, “and rarely will I get longer than a day to break a story.” Because of this, Volk argued, her stories will sometimes not be fully complete, and will receive harassment from online comments. Volk told the students about a story she wrote about Kratom, a supplement that can be bought in smoke shops that claims to help recovering heroin addicts. She interviewed a past user of the supplement and a member on the Cuyahoga Alcohol, Drug Addiction and Mental Health Services board. Proponents of Kratom argued that her story was too biased against the supplement. This story stuck with Julian Howell ‘16.

“It makes sense, as a journalist, that you have to be unbiased even with the chance of criticism to be able to do your job,” Howell said. “I went because I’m considering a career in journalism, and I thought it was cool that she has had a successful career in the field.”

Denison’s Career Exploration and Development (CE&D) engineered the program Next Gen, which aims to bring in alumni who are ten to fifteen years into their careers to talk to current students.

“We want students to know that there are endless possibilities for Denison alumni,” said head marketing manager of CE&D Taby Arthur ‘04, “and as a college student, a career can seem rather distant and vague, but hearing the stories of fellow Denisonians and how they got started can make it seem more real, and help students begin to take steps toward planning and accomplishing their goals.”

It is the goal of every college student to land their dream job. Volk asked the students what each wanted to do, and offered her advice in response. Her most important message: get an internship.

“What’s necessary is getting your foot in the door and getting experience; not a graduate degree.”

Volk appears on channel 5 news at 6 p.m. Sunday through Thursday.